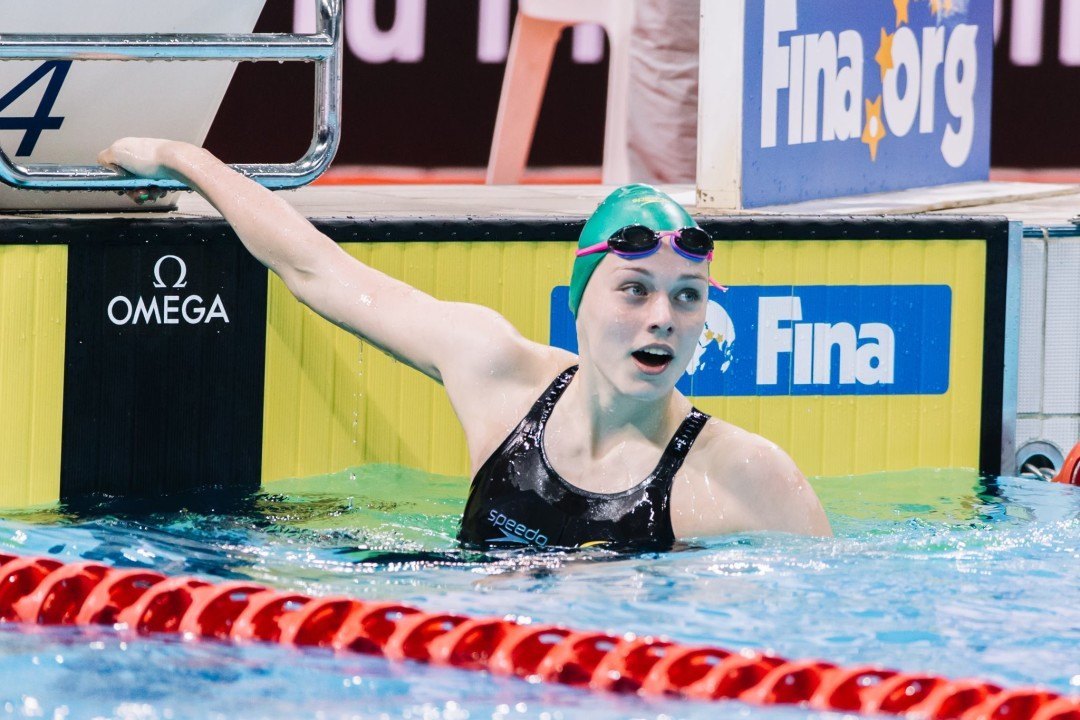 Just under an hour after setting the Australian national record, Minna Atherton has now broken the world record in the SCM 100 back. Stock photo via Adrian Seetho/Singapore Swimming Association

Just under an hour after she broke the Australian, Oceania, and Commonwealth records, 19-year-old Minna Atherton has now broken the world record in the SCM 100 back. The Aussie teen is now the first woman to break 55 seconds with her winning event time of 54.89.

Atherton has swam the 100 back 4 times over the past week, slowly getting faster for each and every swim. She first swam a 55.45 leading off the 400 medley relay, following that swim up with a 55.42 in the individual event last week in Lewisville.

This week, she first led off the medley relay with a 55.12, which originally set the new Aussie/Oceania/Commonwealth records. Most recently in the individual event, Atherton crushed the field for the London Roar with her winning time of 54.89.

Her time as taken over Hungarian Katinka Hosszu‘s former world record time of 55.03 from the 2014 World Championships.

This is now the first world record achieved at an ISL meet. Atherton’s world record, however, will be officially ratified by FINA since it is within the latter five ISL meets.

Didn’t regan smith beat both and masses and atherton by almost 1.5 seconds while leading of the medley relay

she did , and easily ……not even breathless at the end of both monstrous WR’s

This is quite funny. Three months ago Smith TROUNCED the field in 100/200 back including Minna. Yet now, 90 days later at a short course meet, Minna swims well and people want to make her right there with Regan for Tokyo. That’s just hilarious 😂. Long course is a different world than short. You all know it. Stop pretending. Bet against Regan Smith in Tokyo at your own risk. Think she won’t be faster than in Korea? You’re wrong. And, by the way, while Atherton and others are swimming meets in short course, Smith is training for Tokyo. Good luck to everyone else. Congratulations to Minna on GREAT swims. But stop pretending it matters to Regan Smith. It’s irrelevant.

But people criticise the Australians for not racing regularly enough , short course and long course ….. and now they are …… they still get criticised . Huh ? Minna may surprise you in Tokyo

Oh no. Now Regan has these terrible obnoxious superfans like Dressell does.

It’s not stating the truth but how you state it. Your comment is dripping in snarky attitude.

“But stop pretending it matters to Regan Smith. It’s irrelevant.”

As though anyone here was even presuming to know what Regan Smith is thinking besides you.

Pardon my imprecise language. I meant that Minna’s scm success says nothing about her ability to suddenly, three months after being soundly beaten by Smith head to head in a major international competition, hang with Smith. I obviously don’t know what’s in HER head.

I feel like this site is full of U.S. swim fans so the uh… enthusiastic support for successful U.S. swimmers is unsurprising. They’re lucky that the U.S. has both depth and dominance, and has also been fairly reliable in big meets.

agreed – Regan is still light years ahead of anyone right now …..

Congrats Minna on an awesome swim! Flashback a few months back to Aussie World Trials. She swam her first PB in three years. What a journey for this swimmer! Using the realtime converter, her time converts to a 49.66 in yards, which is exactly Regan’s time, and a 57.82 in LCM.

However, it must be recognized that conversions are not accurate. The difference in underwaters. As well as the long course pool being a lot more taxing on the body then short course.

Regan vs Minna in Tokyo Yay!

Whilst I’ll agree 200 has been her stronger event to date, I think she’s probably a reasonable bet to make the 100 final given her 59.0 PB (and having made Worlds final). Given what we’ve seen from Seebohm, its looking more likely Atherton & McKeown are fairly solid bets for selection for both distances.

Yup, totally agree with that. I was talking more about podium contention and that I thought McKeown would have to improve a lot to challenge in that regard. Agreed that she’s a solid pick for the final, given her results to date and upward trajectory. Seebohm is definitely in trouble of possibly not making the Olympic team; the young Aussie backstrokers are too strong.

One of the most interesting parts about this swim is that according to Swimswam’s classic time converter it translates to a 56.09 LCM 100 Back. I don’t know about anyone else but does that not seem a tad unrealistic. However, The newer time converter is more accurate with a 57.82

Based on her underwaters, I’d predict she is around a 58.3 in the LCM 100 Back right now. If she continues to improve her speed on top of the water than sub 58 is not unrealistic.

I think we all are thinking that Atherton can do big things next year. I think that if she wants to achieve those big things she will have to work on her speed on the water and try not to rely on turns too much.

thats where Regan is extremely strong – Over the Water & momentum . She was barely breathless after her 2 WR’s swims last summer

The previous WR belonged to Katinka whose LCM PB is 58.4, so I think 58 low is more realistic for Atherton.

If you want to look at it that way, Atherton’s also almost half a second faster than her former training partner Emily Seebohm, whose LCM PB is 58.23.

Seebohm is better LCM than SCM too. She often says in interviews that she needs to work on her skills.

Might be wiser to hold off predictions until the end of this series (or at least London Roar’s part in it) as she may, or may not, take this mark lower. I do tend to agree that whilst she’s clearly “on a hot streak” at the moment and sub 58 is NOT totally implausible; given the starting point of her 58.6 LCM PB; 58 low (maybe very very low) looks a more realistic call right now.

There’s also the question of whether she’s tapered or not. It seems a lot (most?) swimmers in the ISL are not.

I mean, we really need to stop trying to use these conversions and swimmer comparisons. Kylie Masse never broke 56 and held the LC WR at 58.00 prior to Regan breaking it. That being said, Masse’s underwaters aren’t her strong suit.

Yup, as can clearly be seen in Masse’s ISL races against Smoliga.

*baker was 58.00, also anybody can confirm masse never under 56? sounds implausible

I think Regan will have some competition

It’ll be interesting to see how this translates to LCM for Minna. Her underwarters are as close to perfect as they can get.

Well, she got under 59 seconds twice this year in the 100, so hopefully she can continue to improve her swim speed.

I don’t know much about Regan since I don’t follow US swimming. Was she consistently under 59 before breaking WR?

Ah, all the signs were there then. Still dropped a ton of time though!

Regan Smith’s time in the women’s 100 meter backstroke in the preliminaries and final of the 2019 Counsilman Classic would have won gold at the 2019 FINA World Aquatics Championship.

Great swim no doubt, but Regan was light years ahead of her last Summer and she’s even younger. Regan has hardly been sitting still since her amazing LCM World Records last Summer. Whatever improvement Atherton may have experienced, they may have already been covered Regan.

True, but swimmers don’t all progress at the same speed. Some don’t start getting good until their 20s, while others might flame out after their teens. Still others might plateau for a long period of time or even get worse for years on end before getting better again, so it’s hard to say. With that being said, I would say that Regan is ahead because of her dominant LCM times, but extrapolating future progress from that is a bit sketch.

Amazing race, it was a pleasure to watch!!!