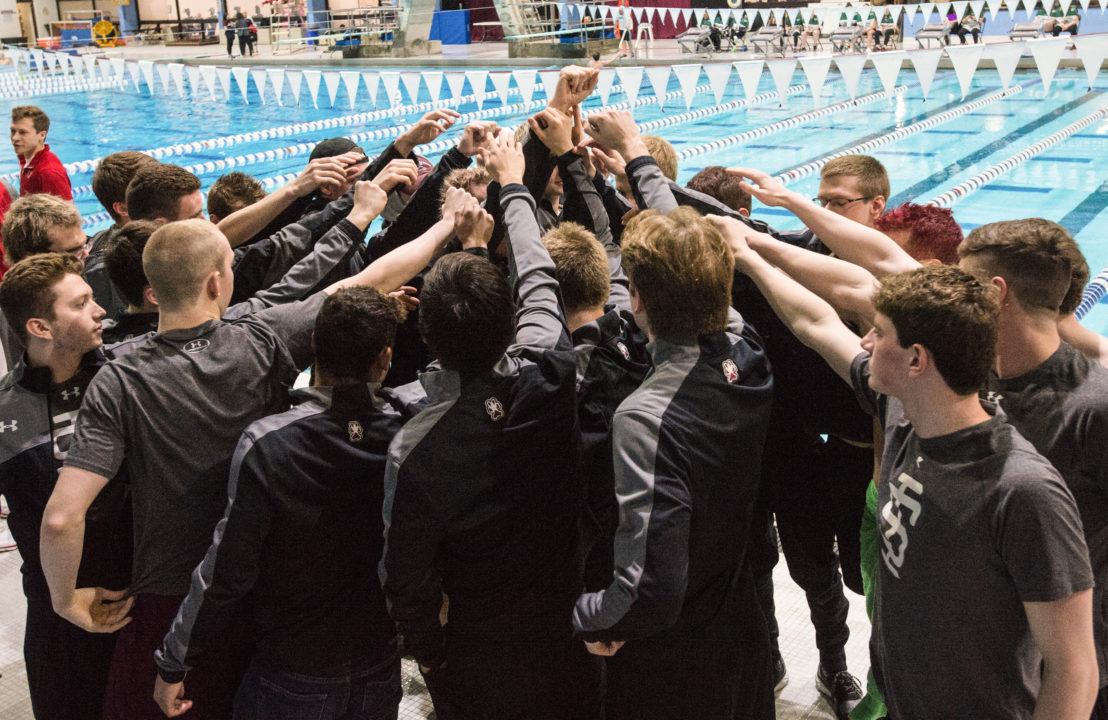 Day three of Mid-American Conference action saw Missouri State increase their lead to over 75 points on consistent depth that has helped them slowly break away from the pack.  In spite of that, the story of the night was Buffalo, whose athletes took four wins and set two MAC Records to make this session a momentum builder as they head into the final day tomorrow.

Missouri State increased their lead immediately in the first event of the night with five scoring athletes in the 400 IM, three of whom placed in the top 8.  Phillip Willett and Christopher Heye might have claimed a 1-2 finish if not for a hard fought 51.56 freestyle split from SIU’s Filippo Dell’Olio who overtook Heye at the close of the race for runner-up.

Buffalo’s Mason Miller split 21.67 and 24.99 on the way to crushing the Mid-American Conference and Meet Records with his spectacular 46.66 finish. The MAC Record had stood at 46.92 since 1999, but was nearly broken twice on this night, as Missouri State’s Artur Osvath joined Miller below the 47 second barrier as well, with Osvath coming back a tenth better, but not matching Millers early speed.

Saluki veteran Andre Luiz Brilhante snuck his hand to the wall first, edging past a pack of six athletes all within .35 of each other at the finish of the 200 free.   He was followed closely by the Bears’ Kacper Cwiek and Miami’s Lucas Brock, just .03 and .07 behind him, but it could have been anyone’s race as the Bears also took fourth and sixth in the event on Michael Mollak‘s 1:37.55 and Will Brand‘s 1:37.75, with EMU’s Jake Tyson edged between them for fifth place at 1:37.70.  This was a big event, not just for the Bears but also for this much improved Miami team who joined them in landing three athletes in the A-final.

Buffalo standout Itai De La Vega successfully defended his MAC title and lowered his MAC and Meet Record from 2016 with his 53.61 win of the 100 breaststroke.  He led a strong Buffalo crew that not only took the 1 and 3 finish with Garrett Clarke‘s 54.23, but also landed 6th and 9th places as well to gain some ground on the Bears who had been slowly pulling further away.  The Bears answered with two strong finishes in the A-final from Runner Up Uldis Tazans and 4th place Nicholas Theunissen at 53.98 and 54.48 respectively.

Hudson Carroll brought home Buffalo’s third win for the night by .01, taking what he could from Eastern Michigan in a 100 backstroke event that they otherwise dominated.  The Eagles not only captured two of the top three spots on the podium with Cole Bateman‘s 48.13 and Tosh Kawaguchi‘s 48.58, but they ran away with big points, taking five of the top nine scoring positions, and helping to keep them within striking range of the team title.

At the end of the third finals session, Missouri State’s depth has given them a cushion them as they head into the final day.  With the 1650 free, 200 back, 100 free, 200 breast, 200 fly, 3-meter diving and the 400 free relay still to be contested, fans of the MAC know that historically even a 75 point lead might not be enough.

Day four prelims begin at 11am on Saturday.

Where’s the day four coverage? The meet is over, yeah?