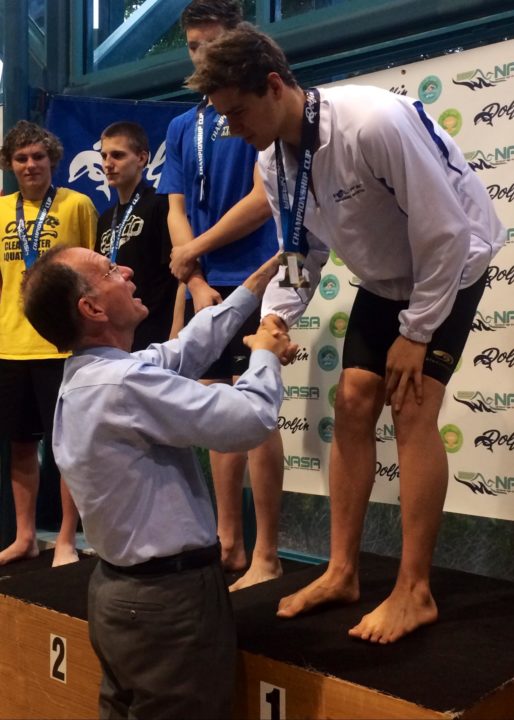 Michael Andrew recieves his winning medal from the NASA Junior National Cup, where he went 19.76 to lower his own 50 free National Age Group record. Current photo via Tina Andrew

Michaeal Andrew has lowered another National Age Group record at the NASA Junior National Cup meet in Clearwater, Florida. The 14-year-old went 19.76 at finals of the 50 free to take another tenth off his NAG in the event.

Andrew won the 15-16 event easily, and also put up the fastest overall time at the meet. Making things interesting was that Andrew swam the event immediately prior, the 200 breast, going a best time there as well.

Andrew went 1:59.63 in that 200 breast, his first time under two minutes. The 200 breast is the only short course NAG 200 yards or lower that Andrew doesn’t currently own, and that time puts him a lot closer than he was. The current 13-14 NAG is held by Reece Whitley, presumably at the 1:58.39 he went two weeks ago at a Junior Olympic meet, although that time doesn’t yet appear on the USA Swimming NAG records list.

The old 50 free NAG was 19.85, set back at the Jenks Sectional when Andrew became the first 14-year-old under 20 seconds.

Michael Andrew, will you please turn 15 ASAP so I can have a couple months’ break from all the SwimSwam email notifications clogging up my Inbox. 😉