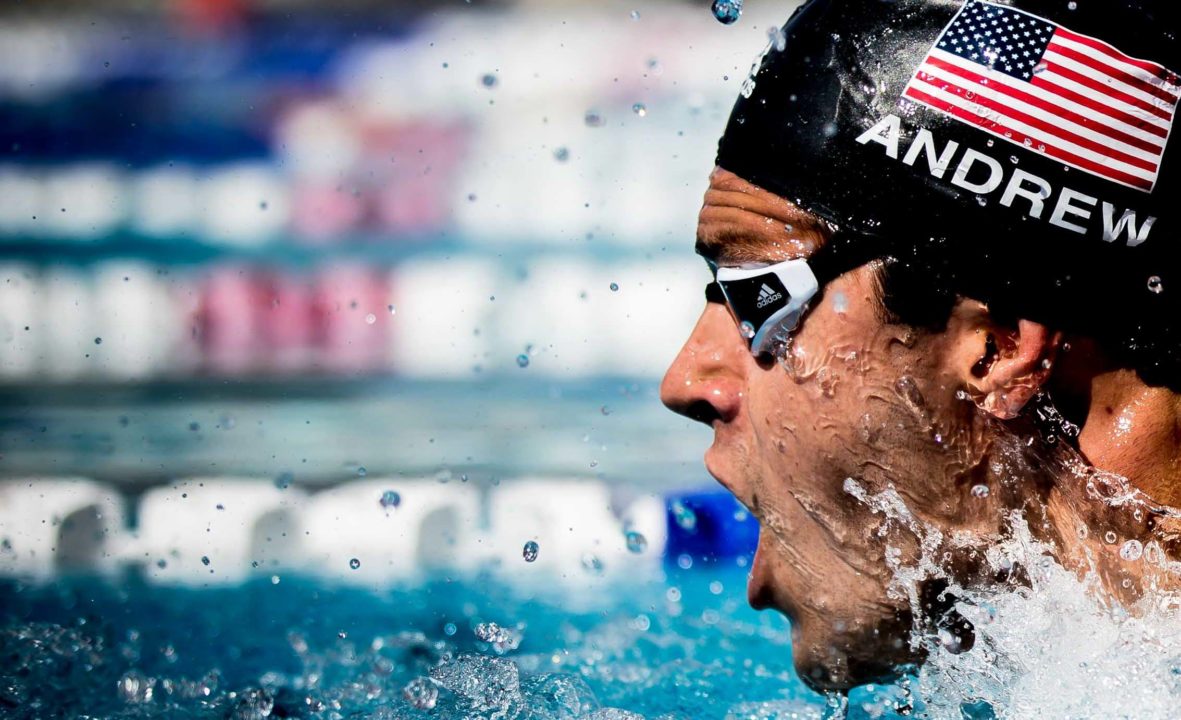 The 20-year-old hit personal bests in both the 100-meter and 100-yard butterfly within eight days, thanks to this morning's 51.49 meter swim. Archive photo via Jack Spitser/Spitser Photography

It’s been a good week for Michael Andrew‘s butterfly.

The 20-year-old hit personal bests in both the 100-meter and 100-yard butterfly within eight days, thanks to this morning’s 51.49 meter swim. Andrew qualified first at the Des Moines Pro Swim Series, shaving .04 off of his career-best with a finals swim still to go. Just last Friday, Andrew knocked half a second off his 100-yard fly best, going 45.47 at the Carlsbad Sectional.

The versatile Andrew is still paring down his lineup for this summer’s U.S. Olympic Trials. His best Olympic hopes appear to be in the 100 breast and 50 free, where he was part of Team USA’s World Championships roster last summer. Andrew was 6th at Worlds in the 50 free and 19th in the 100 breast.

This season, though, Andrew rockets to #1 among Americans in the 100 fly, four tenths ahead of former national leader Tom Shields (51.73). Those ranks should shift significantly in the next few months as top athletes gear up for long course meters, but it’s worth noting that Andrew beat most of the top American Olympic contenders in prelims this morning: world champ Caeleb Dressel was 52.40 and Worlds semifinalist Jack Conger 52.71.

With his swim this morning, Andrew remains #15 all-time among U.S. performers, but is now just a hair from passing Ryan Lochte for #14. Only five American men have ever been under 51 in the race: Dressel, Maxime Rooney (focused on short course yards, for the moment, as he finishes out his senior year in the NCAA), Michael Phelps, Ian Crocker and Tyler McGill.

Getting by either Dressel or Rooney seems a tall order. But the event fits well enough in Andrew’s likely Trials lineup that it could at least be worth a shot. Here’s where all of Andrew’s potential events fall in the Trials order:

Not that fast. My 16 year old broke 51 last week at Ohio regionals, but this guy gets way more coverage.

why am i not surprised at your username..

No one in LCM, assuming that the SWIMS database is up to date.

Can’t figure out if this is sarcasm, ignorance, or just stretching for another way to hate on MA. I guess it makes for good theater though.

indeed , its one of those posts that feel like >>>> BLoub

Its called the metric system

He better plan on being sub 51 come June. Im sure he will have a huge taper. Surfing and doing 2,000 meters a day is a solid base.

Someone is salty that Michael Andrew is better than them.