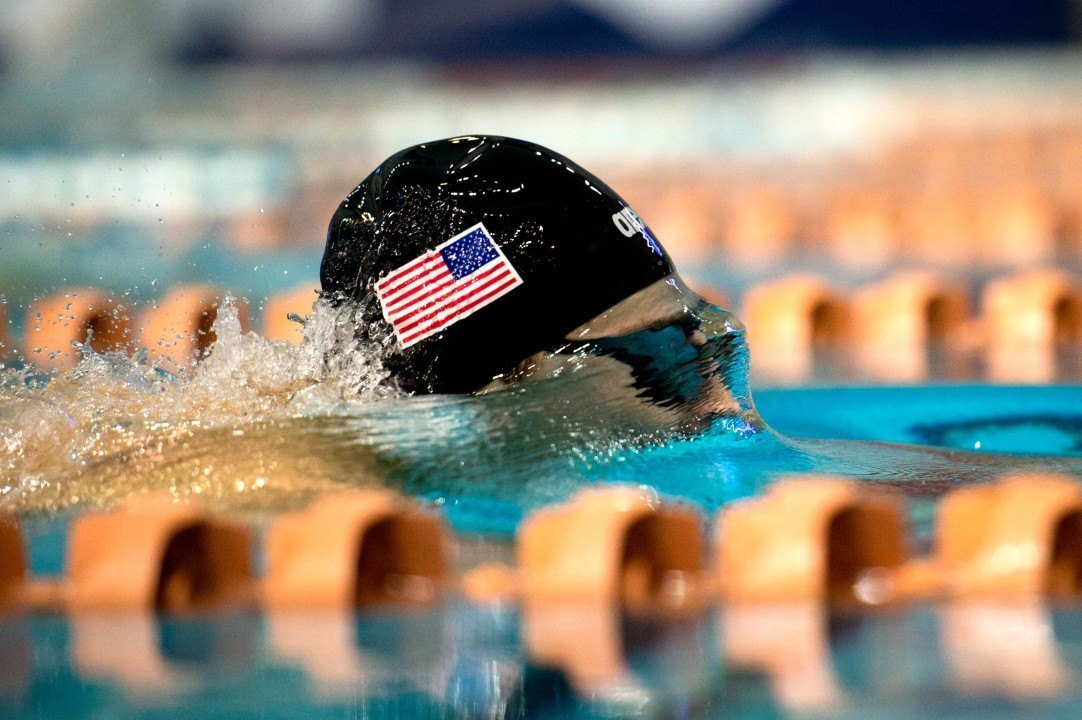 It's been about 9 months without a National Age Group record for Michael Andrew, but the 15-year-old broke through with his first in the new age group on Saturday night while winning the Arena Pro Swim Series at Austin. Current photo via Mike Lewis/Ola Vista Photography

It’s been about 9 months without a National Age Group record for Michael Andrew, but the 15-year-old broke through with his first in the new age group on Saturday night while winning the Arena Pro Swim Series at Austin.

Andrew, who broke nearly every 13-14 record before aging up last spring, cut almost two full seconds off his lifetime-best to etch his name into the 15-16 records.

The top qualifier out of prelims, Andrew went 1:01.67 to knock off the previous NAG, a 1:01.94 set by USC commit Carsten Vissering at the 2013 Junior Nationals.

Andrew has appeared to slow down his tempo on the front half of the 100 breast as of late, and he’s really seeing it pay off in the back half. Though he was 4th at the 50 turn, the Indie Swimmer rolled past the field over the final 15 meters. Comparing his splits to Vissering’s also shows off his big back half:

You can find our full Austin Pro Swim recap here.

Where is Psycho Dad?

Great race Michael ! keep it up like that ! All swimswammers had a smile tonight thanks to your race . Keep it up .

Sheesh, that’s right. I’m so used to pretty much ever 22 and under being amateurs that I forgot he gets to keep his prize money. Definitely better than a minimum wage job at a fast food restaurant. 🙂

Friend: I have to go to work…

Friend: I have to lifeguard at the local pool, but I make good money. 10 bucks an hour. Better than minimum wage!

While going pro has certainly worked out for prodigies like Michael Andrew, and MP… it is not for every up and comer. College swimming and yards swimming have such a huge effect on LCM. And, for most swimmers it is important to recieve a good education.

Important to get good education so you can spell “receive” correctly!

Another commonly misspelled word to look out for is “pedantic.”

Thanks for showing your tremendous amount of CLASS.

Sorry, just a really important mistake that I thought you should fix.

This. If you want follow MP’s career, don’t compete in College. You study but not to compete. College Swimming = R.I.P for any potential swimmers.

As I said above, not everyone is gifted with talent. Take for example Conor Dwyer. He quit swimming and came back as a junior in high school. College swimming revitalized his career. Same, with BJ Johnson, Josh Schneider, and so many more. Not everyone is the next MP

This topic has come up before. To clarify my opinion: I think the majority of swimmers should go the NCAA route. Especially if you can qualify for a scholarship. But for the very top swimmers the NCAA should be skipped. As POL pointed out above, that does not mean you will be flipping burgers at McDs some day. You CAN still go to college, just not compete for a college. Some people apparently don’t understand that. The blunder Missy made, and Katie is considering (unfortunately) has a lot to do with the CULTURE of the sport. Everyone over-idealizes the college experience. “Oh, don’t skip swimming in college. If you do you will really regret it some day.” So it’s good… Read more »

Much more of a nuanced explanation than anything other comments. I’m still not so sure. What do you mean by “very top?” I’m guessing those, around the ages of 16-18, are already medaling, or on a projected path to soon medal, in international competition?

I think the jury is still out on Missy Franklin. If she doesn’t bounce back this summer and/or Rio, that’ll make it look like more of a mistake. But there were also a few female swimmers who went pro instead of going to college, and that didn’t seem to work out for them so well, either.

Going to college didn’t seem to hurt Peirsol, Crocker, or Hansen, either.

TTWX: I think if you have a world record, or are winning events on the world stage, one should not go the NCAA route. And I’m talking about 2015, not other times with other swimmers.

The first reason is $. You can make more money by not going to the NCAA. The second is training- SCY vs. meters and the meet schedule conflicting with USA swimming meets. There was a time when NCAA has the best of the best, and winning an NCAA title was analogous to winning an Olympic medal. Now, the best aren’t even there.

However, there are some good post grad training groups at colleges, so that’s a good thing.

not sure if serious or joking.

If serious, then you sir are laughably wrong.

I really think that breaststroke is his thing…

However, and before anything I am not an expert, but does anyone else realize how low he is to the water when he breathes? I remember last year he was doing 50’s without breathing… IDK it just seems very low.

Still a ridiculous time for a 15 y/o. Think about it, last years winning JNats time was 1:02 (Hoppe)! And he is going under that as a 15 y/o in January! Wow. My prediction is he is going to wreck JNats and JWorlds… 🙂

No, I don’t think anyone’s mentioned him being low to the water.

Kidding, that’s a debate that comes up on this site every time MA’s breaststroke is mentioned. Seriously, though, that’s intentional on his part. The idea is that less vertical movement allows him to minimize “wasteful” energy and keep drag lower. I’m not sure there’s a “best” way to do it, personally. Some people think it’s better to keep the pull small and fast to minimize drag and get to the kick fast, thus allowing a high tempo and a stroke cycle that is dominated by the kick. Some people think you need to anchor your hands out wide and push the hips forward, making the shoulders and head… Read more »

Sven, it is true, as Clive says, in breaststroke one size does not fit all. But answer these two questions to me please regarding staying low:

1. If staying low is the way to go to minimize drag for a strong kick, wouldn’t complete streamline and never breaking surface with kicks be fastest “breaststroke” if legal?

2. Name one top level world breaststroke swimmer that stays that low? None I think. That is a reason for that.

One thing that Salo ALWAYS says about Breaststroke – one size doesn’t fit all! There is a ton of variance!

This is really long term but I like to think ahead. Since the topic of college came up and MA is pro and obviously he is not going to swim in college. What does he do? I hope he goes to Liberty University and swims under Jake Shellenberger who is the next david marsh as far as I’m concerned. If I had to guess, I think this is on the radar and will probably happen.

One thing to hope for it, but to predict that it will? That’s a bold guess to make. I suppose we’ll see.

This is the weirdest post in a while on this site

why? his home school program is based out of liberty university and Jake Shellenberger is a coach on the rise. Jake S is probably one of the best unheard of coaches on the planet.

Jake Shellenberger is not the next DM… Let me make that clear.

He may be good but you cant call one coach another. They have different styles, different methods.

I had a swimmer recruited hard by Jake. Like really hard. He was an excellent sales man to us. Lots of energy.