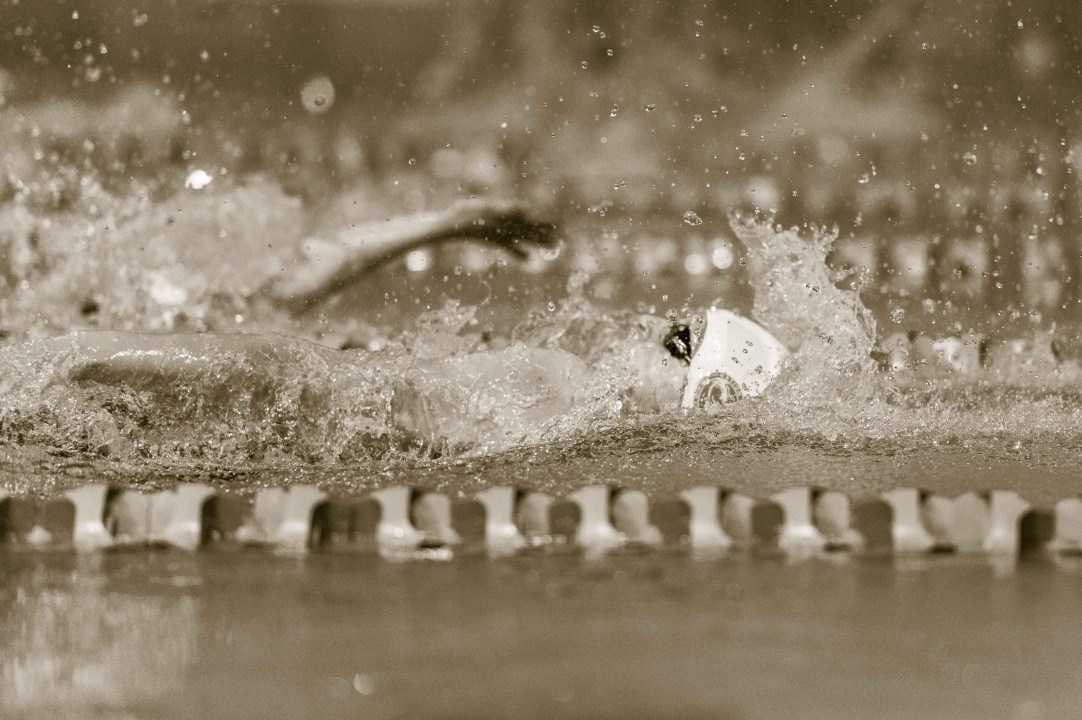 Katie Ledecky will swim the 800 free. Another lifetime best (she's got two this weekend) would be a World Record. Current photo via Mike Lewis/Ola Vista Photography

After lifetime bests already in the 200 IM and the 100 free in Austin, superstar Katie Ledecky will chase another impressive performance in the timed-final 800 free on Saturday night at the 2015 Pro Swim Series – Austin.

Overall, Saturday night will be a night of subtle storylines. Katinka Hosszu, still looking for her first win, is entered in the 200 IM, 200 fly, and 100 back A-finals. On the younger end of things, Michael Andrew is looking for a breakthrough first win on the Grand Prix/Pro Swim Series tours, and enters as the top seed in the men’s 100 breaststroke; while 14-year old Canadian Taylor Ruck has become a sensation, crushing National Age Group Records all weekend long.

A pair of youngsters dueled in the front of the field early on as Mission Viejo 17-year-old Katie McLaughlin and Nation’s Capital 15-year-old Cassidy Bayer sat one and two at the 100-meter mark. A veteran field closed in, but the two teenagers kept several international medalists at bay and wound up tying for the event win at 2:09.12.

Those four really separated from the field late after the whole group stayed bunched up for about the first 100 meters. A couple more young athletes led the second wave, as Longhorn Aquatics’ 16-year-old Victoria Edwards was 2:12.79 for fifth and Cal freshman Noemie Thomas was 2:12.99 for sixth.

Phoenixville 16-year-old Emma Seiberlich held onto the top seed in the B final, going 2:14.61 to take 9th overall.

A second-straight event went to a high school senior and future California Bear as Andrew Seliskar won the 200 fly with ease against a very tough field.

Seliskar, one of the best young swimmers in the nation right now, was gone by the 100-mark, opening in 56.49 to lead by about a full second. Seliskar powered home to a 1:55.92 that tied his lifetime-best and would have ranked him in the top 15 in the world for 2014.

After a bronze medal in the 200m breaststroke earlier in the meet, Breeja Larson ended up taking home the win in the shorter event in a very solid time of 1:07.33.

Going out very quickly was Kaylin Burchell from the University of Alabama who touched almost dead even with Larson at the 50m mark. It was Larson however who was ahead by just three one-hundredths at the touch with a split time of 31.84.

Fiona Doyle of the University of Calgary up in Canada managed to turn in third just behind the two leaders and they all surfaced together with Larson just slightly ahead.

On the last 50 Larson flew past all of her competitors to win the race by almost a full second by building her back-half speed. Burchell was able to hold on for the silver medal clocking in at 1:08.21. Doyle also was able to retain her placement from the 50-turn with a end time of 1:08.99 to grab the bronze.

Larson won the race on the last 50 where she split a 35.49 which was almost a full second faster than anyone else in the field.

The runner-up in the 200m breaststroke earlier in the meet, Maria Garcia from Cal, finished sixth in 1:09.38.

Today was a historical day for Michael Andrew. He started off the morning with a personal best in his 100m breaststroke which set him up perfectly for a chance to take his first Grand Prix/ Pro Swim Series title.

Out like a rocket was Glenn Snyders, an Olympian from New Zealand who trains out of the Trojan Swim Club. Snyders was very quick with a time of 28.49 to lead the field by a sizable margin. Right behind him was Mike Alexandrov.

Andrew turned in fourth, but with a beautiful pullout of the wall started to make a little bit of a move on the rest of the field.

Slowly, everyone began to catch Snyders. At the wall it was very close, but it was Andrew who managed to get his hands on the wall first for gold, solidifying his first Pro Swim Series win ever with a new personal best of 1:01.67.

Snyders grabbed the silver with a time of 1:01.70 with Alexandrov finishing third not far behind in 1:01.77.

That time for Andrew also doubled as a 15-16 national age-group record in the event.

Natalie Coughlin is undoubtedly one of the best backstrokers in the history of the sport, however recently she’s been focusing on the sprint freestyles and shying away from the backstroke events.

Today, Coughlin entered the water in the 100m backstroke and showed that she still has plenty of talent in those events, turning first at the halfway point with a split-time of 29.41.

At the 50, Coughlin had about a 0.4 second lead over Oakville Aquatic Club’s Dominique Bouchard who turned in 29.84. Those two were the only swimmers under 30-seconds at the wall with 14-year-old Talyor Ruck from Scottsdale Aquatics third in 30.01. Ruck was closely followed by Katinka Hosszu who turned in 30.13.

Following that explosive start, the field begin creeping up on Coughlin who tried to hold on for the win. Bouchard continued to get closer and closer to Coughlin, and at the touch Bouchard was able to get by her by a very slim margin, clocking in at 1:00.68. Second was Coughlin in 1:00.70.

Matt Grevers is one of the only veterans left in the 100m backstroke in American swimming, an event which has plenty of depth throughout all ages. Tonight, it seemed as though he would have a showdown between rising star Ryan Murphy from Cal, but Grevers had other plans in mind.

Right from the get-go Grevers took the lead. He was way ahead of the rest of the field at the 50 turning in 25.97 with Japanese backstroker and Club Wolverine swimmer Junya Koga second in 26.11.

It was clear that nobody was catching Grevers, but he kept charging. He was slightly long on his finish, but managed to grab a first place finish with a time of 53.27. Second was Ryan Murphy of Cal who split a 27.59 on the final lap to pass Koga, and take the silver in 53.82.

Cal’s other backstroke star, Jacob Pebley, finished sixth overall with a time of 55.65.

Katinka Hosszu finally got herself a win in Austin, something that’s eluded her all competition. On the final 50 she chased down Caitlin Leverenz to claim gold, and beat her by just 41 one-hundredths of a second.

Leverenz led the way after the fly, turning in 28.50. Behind her was Hosszu a half-second back in 29.04. Hosszu closed the gap by a little bit on the backstroke, but still trailed behind Leverenz. Hosszu split a 33.61, Leverenz was a 33.88.

On the breaststroke, Leverenz extended her lead. She needed to be well ahead of Hosszu heading into the freestyle, as Hosszu is one of the best freestylers in the world. Leverenz did just that, splitting a 37.98.

The three swimmers were neck-and-neck all race long. It was Dwyer, Seliskar, and Prenot going 1,2,3 at the first 50 wall. They went that way through to the half-way mark. After the breaststroke however, Prenot pulled up ahead of Seliskar with Dwyer still in the lead.

The freestyle was a true battle with all three of them trading places until finally the order was solidified at the wall. Dwyer took the win in 1:59.56. Seliskar was able to just out-touch Prenot who he chased down on the last 50 with a time of 2:00.22 to Prenot’s 2:00.24.

Katie Ledecky has been swimming well all week, just to put it lightly. She swam a time in the 400m freestyle that no swimmer in history other than herselfand Frederica Pellegrini’s 2009 performance is faster than, capped off a win in the 100m freestyle with a personal best time, and won the 200m freestyle by over two-and-a-half second.

Tonight however, was all about Ledecky and the clock.

Ledecky was a 8:11.23 at the touch, a time which stands as the second best performance in the 800m freestyle of all time.

Much like in the women’s 800m freestyle, there was one very clear victor in the men’s 1500m freestyle and that was rising American distance star Connor Jaeger. Jaeger already won the 400m freestyle earlier in the meet, and took the win here tonight with a time of 15:16.71.

😎
Michael Andrew for his first Grand Prix win? Needs 1.01. It would be huge for him.
Katie McLaughlin vs Katinka Hosszu in the 200 fly. Cassidy Bayer too.
Ryan Murphy vs Matt Grevers vs Junya Koga in the 100 back
Natalie Coughlin in the 100 back. Old memories.
And of course Katie Ledecky in the 800 free for a solo race but she’s used to that. 8.16/8.18?

Hosszu was not in the equation. Excellent swim by Cassidy Bayer and Kate Mchauglin. 2.09.12

Night of the youngsters?

Tie in the women’s 200 fly!
Both Katie McLaughlin and Cassidy Bayer in 2.09.12.
First Grand Prix win for Miss Bayer. Cool to see someone who smiles and is happy.

Rowdy Gaines: “Michael Phelps has a great shot at swimming again the 200 fly.”
Well. I don’t think so.

When it comes to Phelps Rowdy is always very optimistic, but with that being said if he focused on the 100m/200m fly only I could see it. If he’s going to do the 200IM and 100/200 free /relays then I can’t see it happening plus he’s never said he wanted to do it again.

I’m pretty sure Phelps has emphatically stated that he’s done with the 200 fly. Granted, he said he was done with the 400 IM going into London, and done with swimming after London, so I guess you have to take his denial with a grain of salt, but still…don’t really see it happening.

200 races are for the very young (i mean single stroke races). In London he could have swam a better 200 fly had he ditched the 400IM. Now it’s really too late. He must concentrate on the 100s and on the 200 IM. My two cents

Totally agree with you.

Rowdy is errr… for the masses, isn’t it what they say 🙂

WOW! I was too conservative with my time expectation about Andrew Seliskar!
1.55.92!
Very impressive.
1.53 next year and big olympic medal contender. Very open behind Chad Le Clos.

I am not yet ready to award Le Clos the gold yet. I’ll give him the edge over Seliskar at the moment, but I wouldn’t be surprised if it goes the other way come 2016.

Stunning 200m fly time for an in season meet. He is throwing down the gauntlet to Shields(?), Seto, Le Clos, and the rest…… Looks like you’re going to need a 1:51 in Rio to get the Gold.