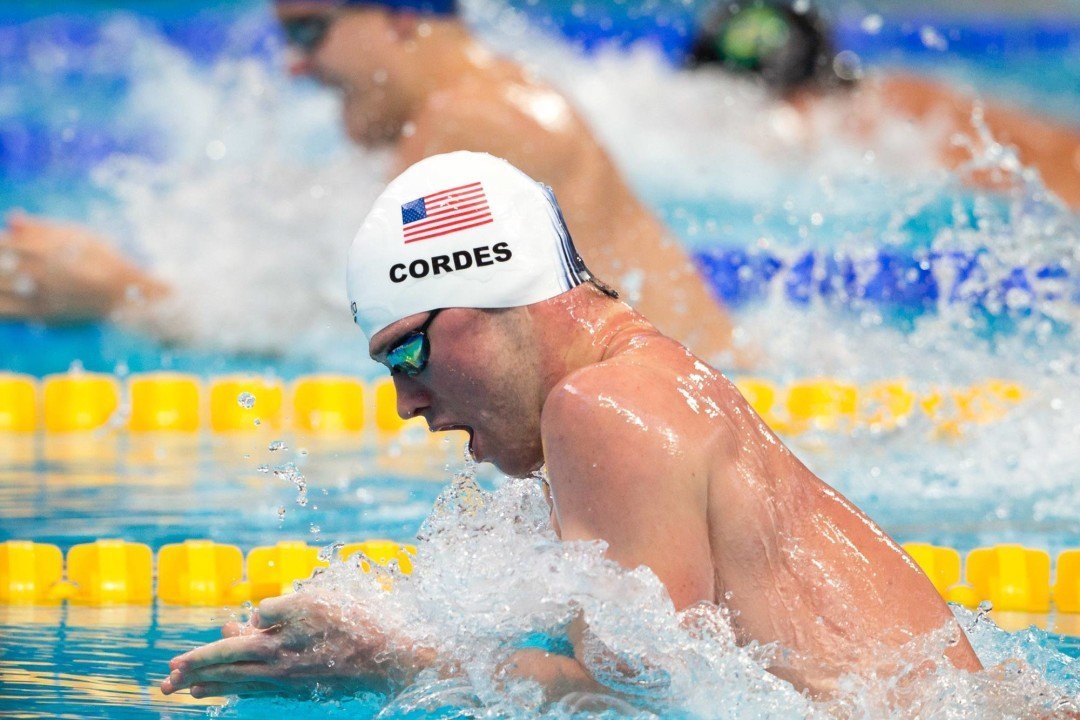 American Kevin Cordes, who has been training with Singaporean National Head Coach Sergio Lopez since May, will be on the roster of 12 athletes Lopez will be bringing to Austin. Archive photo via Tim Binning/TheSwimPictures.com

Earlier this week, a dozen members of Singapore Swimming’s National Training Center (NTC) squad arrived in Jacksonville, Florida.  The squad will be partaking in a training camp at The Bolles School until January 10th, then will be moving on to compete at the Arena Pro Swim Series in Austin, slated for January 15-17th.

Singapore National Head Coach, Sergio Lopez, provided the roster of athletes participating in this two-part journey, of which nine have FINA “A” or “B” Olympic-qualifying cuts. Swimmer Danny Yeo will also be joining up with the squad a few days before the Pro Swim begins. Lopez admits the team is “very young”, but that they are “very talented and this group is paving the road for Tokyo 2020.”

Lopez explained to SwimSwam that he believes “the Austin Grand Prix is an opportunity for our swimmers to see where they are with their training while racing some of the best swimmers in the World. For the Singaporean swimmers it is an amazing experience and forces them to have to race their best in the mornings in order to have a chance at a second swim. In our Region (SEA) that does not happen. Our swimmers don’t understand how important is to have to race at a 100% in the mornings since the depth of our competition is very weak.”

Having a multitude of coaching experience within the United States, most recently as the Head Coach of the club/high school combo program at Bolles from 2007 until late 2014, Lopez brings a unique perspective to his athletes’ multi-faceted training.

“I have been a coach for 20 years in the USA and I understand the many lessons they can learn from the Grand Prix [Pro Swim] that can help them be ready to perform at their best in Rio. If I want Singapore to be competitive against the best of the world we have to get out of our comfort zone and race the best at anytime with no fear and the will to learn. As a coach I always find many teaching and learning  moments at these camps and most important at this meets that helps us have better swimmer/coach synergy,” Lopez described to SwimSwam.

Among the swimmers set to compete in Austin, including dynamo Quah Zheng Wen who most recently broke 5 National Records at this month’s Singaporean Short Course Nationals, readers may notice three non-Singaporean athletes listed on the men’s portion of the roster. American Kevin Cordes, South African Michael Meyer, as well as Rex Tullius, who represents the Virgin Islands, are in Jacksonville with the squad.

Cordes moved to Singapore to train under Lopez in early summer of 2015, but Meyer and Tullius are newer to the NTC squad. Lopez said Meyer has been with the training group since September, while Tullius had planned on coming the following month in October, but, due to environmental haze issues, was forced to stay back until November. Both of the swimmers reached out to Lopez, inquiring about joining his crew of rising stars.

Collectively, Cordes, Meyer and Tullius are part of the NTC Sparring program created back in May. “Having this program with these swimmers is showing our Singapore swimmers and parrnts another level of training and commitment,” stated Lopez.

Meyer had been training with Olympic champion Chad Le Clos under Coach Graham Hill in his home nation of South Africa, but contacted Lopez about moving to his group in the lead-up to Rio. A glowing recommendation from Coach Hill which accompanied Meyer sealed the deal for Lopez.

As for Tullius, Lopez tells SwimSwam, “I have known Rex for a long time from my time at Bolles and I have always being a fan of his swimming. When he approached me in Kazan I was very excited.”

Of Meyer and Tullius, Lopez describes the men as, “training very well” and said they have helped the NTC swimmers both ‘in the water and out of the water.’ Per Lopez, both of the international athletes “understand high level training, they are very focused and they have adapted very well and quickly to the group dynamics and my thought process.”

Competing at the Austin Pro Swim Series will be a test of sorts for Cordes, Meyer and Tullius, as, based on their performance, Lopez will be able to gauge how the men are adapting to the ‘training and thought process towards their respective Olympic Trials and Rio.’

The recipe of athletes appears to be paying dividends, as Lopez says that, “Right now, on any given day, our level of training within the group is very high and they are swimming faster than ever.”

Having outside athletes pay a valuable visit to the OCBC Aquatics Center, the home of the NTC Squad, is somewhat of a regular occurrence actually. “Since September we had some top international swimmers come and train with us for one to three weeks like Micah Lawrence  (SwimMAC), Alia Atkinson (SoFlo), Carolina Corolado (SoFlo), Danielle Valls (Switzerland), Sean Mahoney (Cal), Renato Prono  (Paraguay), Lukas Rauftlan (Switzerland) and some of their coaches Chris Anderson (SoFlo) and Dirk Reinicke (Switzerland). All this activity and training together has really elevated the awareness and understanding of high performance and also has increased the motivation of our swimmers and coaches. Huge learning experience for everyone,” according to Lopez.

Lopez says he and his athlete collective are planning to return to the United States again in June to compete at the Indianapolis stop of the Arena Pro Swim Series.  That trip, however, will be an exclusive journey for those Singapore National Team members that have qualified for Rio after the Singaporean Olympic Trials slated for March. Meyer and Tullius are scheduled to be included within the returning squad of swimmers.

10 of our #NTC squad swimmers left for a training camp this morning. They will be training in Jacksonville before taking part in the Austin Grand Prix on 15-17 Jan. #SwimWithUs #RoadToRio