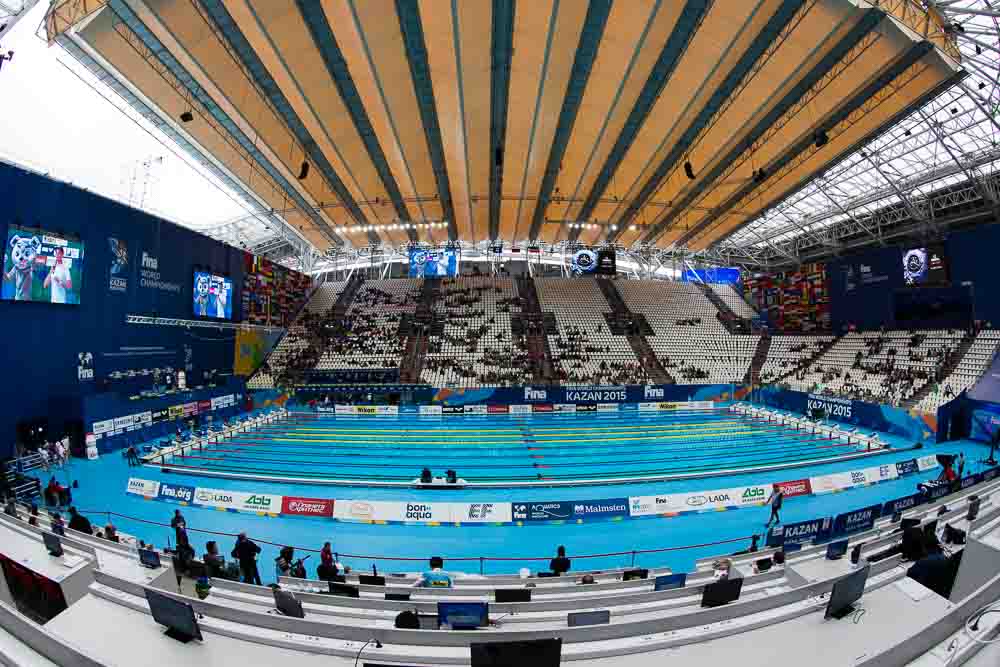 New information has come to light about the suspicious World Championship entry times from the Mexican Federation. Stock photo via Tim Binning/TheSwimPictures.com

Mexico’s Swimming Federation has announced that all events sanctioned by the nation’s governing body for the sport will remain canceled until further notice.

Joao de Lucca, who won back-to-back NCAA titles in the 200 free in 2013 and 2014, has announced his retirement from elite competitive swimming.

As a follow-up to our report last night about some irregularities in the times submitted by the Mexican Swimming Federation, early on Thursday morning, FINA has acknowledged our question, but has still not provided any comment.

Christer Magnusson, a member of the FINA Swimming Technical Committee and the organizer of the website scmsom.se, the only place we could find many of these entry times recorded (as updated, undated National Records) did respond early Thursday. Magnusson explained that when he updated the Mexican Records on his site, he used the start lists from Kazan as a source, presuming they were correct. Magnusson says that he cannot speak on behalf of FINA, but that he saw the times on the start lists like the rest of the world, and uses those lists as one of many sources to maintain massive amounts of data on his site.

Since last night, we have received some requests to lay out the entry times as compared to the relevant standards. You can read an explanation of what the standards mean (in some cases the listed standard below is an “A” standard, and in some cases it is a “B” standard) on our original report.

While this rubric does not, and should not be read to, imply that every entry time was made up, we were only able to verify a small handful of the entry times, and have asked FINA and the Mexican Swimming Federation to do so. Mexican swimmers proceeded with their races in prelims on Thursday morning in Kazan.

The one entry time that we were able to verify was the 1:10.72 from Daniela Carrillo in the 100 breaststroke at the 2015 Mexican Nationals. We were unable to verify her entry in the 200 breast (she was 2:33.97 at Nationals in that race), but she did go well under the FINA “B” standard in that race on Thursday morning with a 2:30.

Lorenzo Loria did, in fact, swim a 23.65 in the 50 free at Mexican Nationals (though not the 23.63 as entered), but still should not have been allowed to enter at Worlds by qualifying standards – that time did not meet the “B” standard.

More information has also been revealed after speaking with several members of Mexico’s Pan American Games team as to why the swimmers who are at the World Championships are entered. They have informed SwimSwam that these swimmers were meant to be swum at the World University Games in Gwangju earlier in the summer, but an error in Mexico’s entries kept them from swimming there. Instead, these swimmers were sent to the World Championships, which have much higher qualifying barriers than does the Universiade.

Given that most of the swimmers entered at the World Championships were in 3rd, 4th, and 5th place positions at Mexico’s National Championship meet earlier this year, it makes sense that it would be a team typically sent to a second-tier meet, though we were unable to find any publication of Mexico’s intended roster for the Universiade.

All of this is supported by the fact that Mexico entered many sports at the Universiade, but not swimming.

We have also examined past entries to the World Championships for Mexico, and those entries all seem to be in line with FINA qualifying standards. Entries for the Pan American Games earlier this year, where most of the country’s top swimmers competed, also appeared correct, with those entries being handled by USA Swimming.

Note: we were able to verify that Lorenzo Loria swam a 23.65 at Mexican Nationals, very close to the 23.63 that he is entered with. However, because Mexico has another swimmer entered with an “A” standard, and Loria’s time didn’t even meet the “B” standard, that entry should not have been allowed anyway.

I’m shocked. Who would have thought that Mexico would be guilty of corruption? Of all countries, say it isn’t so. FINA is complicit in this with either shockingly bad oversight, not catching seeds that are faster than Mexican National records, or flat out corruption of their own merit.

This article and the prior one are 5 stars, BTW.

If you measure it in dollars ($), the US is many times more corrupt than Mexico. But, you get overly insulted and frustrated because they do something like this (which is terrible as well). What I ask is to not flat out bash Mexico’s name as if we are the only country to consider corrupt practices in society. What about all the illegal consumption and weapon smuggling into Mexico that comes from the very US. That is a way more serious situation that you won’t ever acknowledge.

It is a bit of a harsh post, but I felt the need to defend the name of my country. I hope you can get the chance to read this.

Even though information is true, its sad to see how swimmers like daniela carrillo, mateo gonzalez,monserrat ortuño and daniel ramirez get involved in it even having b standards to be at worlds. I dont justify the mexican federation and the fact that they have no criteria when sending people to big meets. But lets recognize that these 4 swimmers are there and have the times to be at worlds.

I can verify those times for Daniel Ramírez I am his teammate and witnessed him swim those times..

Hi Jimmer, we would need to see provided documentation of those times, especially since we talked to Daniel Ramirez himself and he said that he never swam the entry times. See here: http://swimswam.com/mexicos-daniel-ramirez-says-he-never-swam-entered-times/