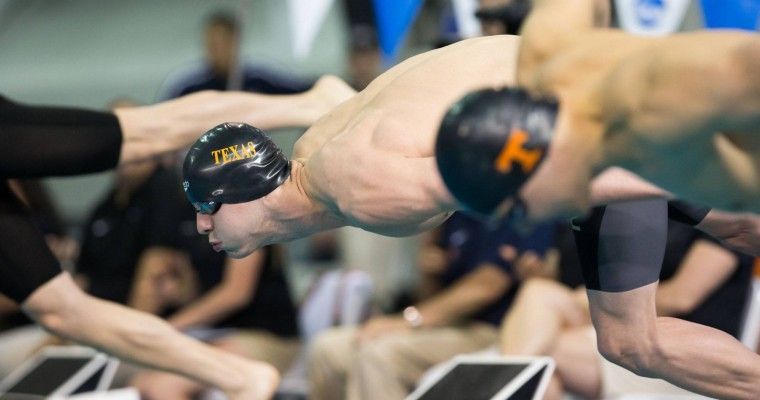 The summer’s third stop on the 2014 Texas Senior Circuit meet wrapped up on Sunday night, and has been by...

The summer’s third stop on the 2014 Texas Senior Circuit meet wrapped up on Sunday night, and has been by far the most successful of the three meet series designed to increase competitive opportunities for the state’s deep national-level talent pool.

The men’s and women’s sprint freestyles were the top results on Sunday evening.

First, in the women’s race, National Teamer Simone Manuel won the women’s 100 free in 55.36. The First Colony swimmer, who is Stanford-bound in a few months, swam a 55.36. She’s been roughly a full second better this year, but the time is still ahead of where she was at this point in her big breakthrough 2013 season – as she has been all year. Manuel is well-positioned to qualify for the Pan Pacs team in multiple events.

Former Princeton swimmer Lisa Boyce, who is now training at Longhorn Aquatics, took 2nd in 56.57, and Lakeside’s Lauren Pitzer was 3rd in 56.83, which is her lifetime best. That puts the talented 15-year old Pitzer ever-so-close to the Summer Nationals standard of 56.69, which would be her second such standard after a 25.9 in the 50 free earlier in the meet qualified her.

Shortly after, in the men’s 100 free, Matt Ellis picked up his 3rd win of the meet, swimming to a 49.66. The University of Texas junior won his three primary events, and the three he’ll swim at Nationals, this weekend. As a final tune-up, that’s a successful weekend and a good confidence-boost for him headed toward Nationals.

Mat Ellis is on point this weekend! Exciting to see what he can do at nationals.

Don’t forget about the killer swim from Davidmichael Michael Bernal in the B final of the 100 back. Dropped about 2 seconds off of his lifetime best. Whichever college coach that snags him for next year is in some real luck. It was a fantastic final session of the meet with phenomenal swims all around.

Lauren Pitzer swam her first senior national cut Friday night in the 50 free, second behind Manuel with a 25.92! The 100 would be her 2nd Summer National cut.

Thanks for the update Alex, I missed the one from Friday!

HEHE! Thanks Alex SELLERS! Don’t think you can hide, I know who you are! I appreciate it 🙂

Hehe you’re so silly Lauren. You’re so very welcome little sis 🙂 I can’t wait to see you at practice!