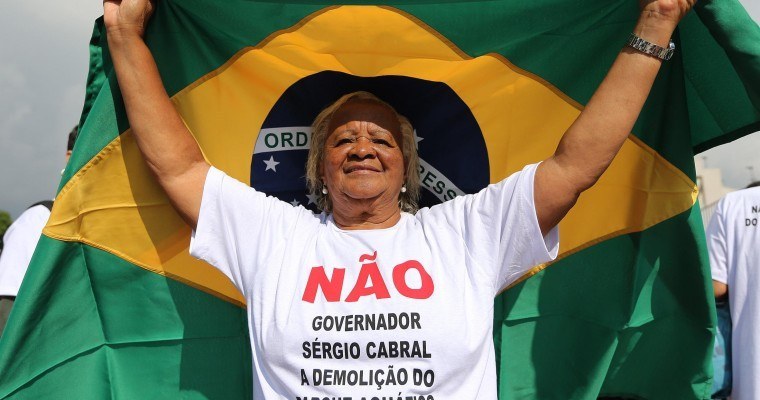 Brazil is on the right track toward 2016. With safety measures proven, the focus can now turn to the construction and legacy for the 2016 Summer Olympic Games. Stock photo via Satiro Sodre/SS Press

At the start of the 2014 FIFA World Cup a month ago, we told swim fans why they should care about the World Cup, even if they aren’t keen on the sport of soccer itself.

It appears, with two years to go before the Summer Olympic Games (one of the few spectacles on earth that can match the enormity and security challenges of the World Cup), Brazil has succeeded – with flying colors.

Security performed impeccably. The one real issue came early in the tournament, where almost 100 Chilean fans tried to run through security to get into a sold out match: a chaos that was immediately quashed by stadium security. That match was at the Maracana in Rio, which will be a central facility of the 2016 Olympics too, in the heart of Rio.

Even after Brazil’s difficult, and frankly humiliating, 7-1 loss to Germany in the Mineirao Stadium in Minas Gerais, there were no reports of wide-spread rioting: a restraint that most of the world (including the United States) should be in awe of. German fans were asked to remain in their seats after the match and then escorted safely out, with no reports that we could find of any violence.

There has been reports of crime, but nothing that sounds out-of-the-ordinary for any event of this size. A further update on the statistics involving petty crime will take a few months to be released, but a report by the LA Times interviewing fans have found many to be pleasantly surprised about the lack of issues.

Among the measures put in place were helicopters and cutting-edge surveillance equipment, plus one police officer for every 50 people attending a soccer match. The tourism board pushed Adidas to pull a line of shirts because it promoted “sexual tourism,” something Brazil didn’t want associated with their World Cup. They made solid decisions that, while may have felt repressive to some locals, created a safer atmosphere for the world. When a city signs up to host an event like the World Cup or the Olympics, then the world’s safety does deserve equal consideration.

With regard to infrastructure, public transportation was reported to be very crowded, and Rio will now have two years to try and improve that situation. There was also a bridge collapse in Belo Horizonte, one of the World Cup hosts, that killed two – however Belo Horizonte won’t be hosting any part of the Olympics.

So the first pre-Olympic test for Brazil in terms of safety was a positive, perhaps a B+or an A- on a traditional American grading scale (which is something like an 8.8-9.2 in the typical Brazilian grading scale).

Now the focus turns to facilities and legacy. With a wave of construction complete in the form of World Cup stadiums, the construction resources can be turned to finalizing the 10 permanent new venues, 8 temporary new venues, and 8 renovation jobs needed for the 2016 Olympic Games. Many sources around the world have taken an opportunity to claim that the local city (Moscow, London) is being seriously considered as a “backup” city for the 2016 Olympic Games, and while most of that seems to be speculation reconstructed as secret inside information, it seems likely that after a successful World Cup, those whispers will be silenced.

The matter then becomes legacy, as events like the World Cup and the Olympics are not just sporting in nature. Productions on such a massive scale have huge financial and socio-cultural impacts, and while most of the foreign fears have surrounded safety and security, the endemic concerns have been over the events’ respective legacies.

Both the World Cup and Olympics have required a significant investment of public funds to build stadiums that, after the likes of Messi and Phelps depart, won’t help the children living in favellas within a stone’s throw of their grounds. The government has invested significant resources into fighting and reducing gang activity in and near the areas that will be popular during the Olympic Games, but there are no guarantees that this support will continue when the international eyes look ahead to Russia and Tokyo.

If the IOC is held accountable for its policies, however, there will at least be some eyes watching. “Legacy” has been declared publicly as a primary decision-maker for the IOC. With the disastrous legacy left of the 2004 Olympic Games in Athens, every few weeks those failures are revived in either discussions of their eeriness, their sadness, or their pure wastefulness. That’s not a stain that the IOC has taken lightly, especially in the city and nation that is the Olympic birthplace.

With the pressure and the attention that has been placed upon the IOC with concern about Rio, hopefully the incentive is properly placed to make that legacy work.

Congratulations to Germany on their 2014 World Cup title. The World will see you in 2016, same place, for the rematch.

are you insane, blind or in the employ of security companies? this evaluation of security does not take into question the human rights abuses, the exaggerated force used by police against protesters or the miliatriazation of public space undertken for the realization of elite sporting events. Your perspective is without context, critical thought or depth and does much more harm than inform readers about one of the most critical elements of the mega-event circus.