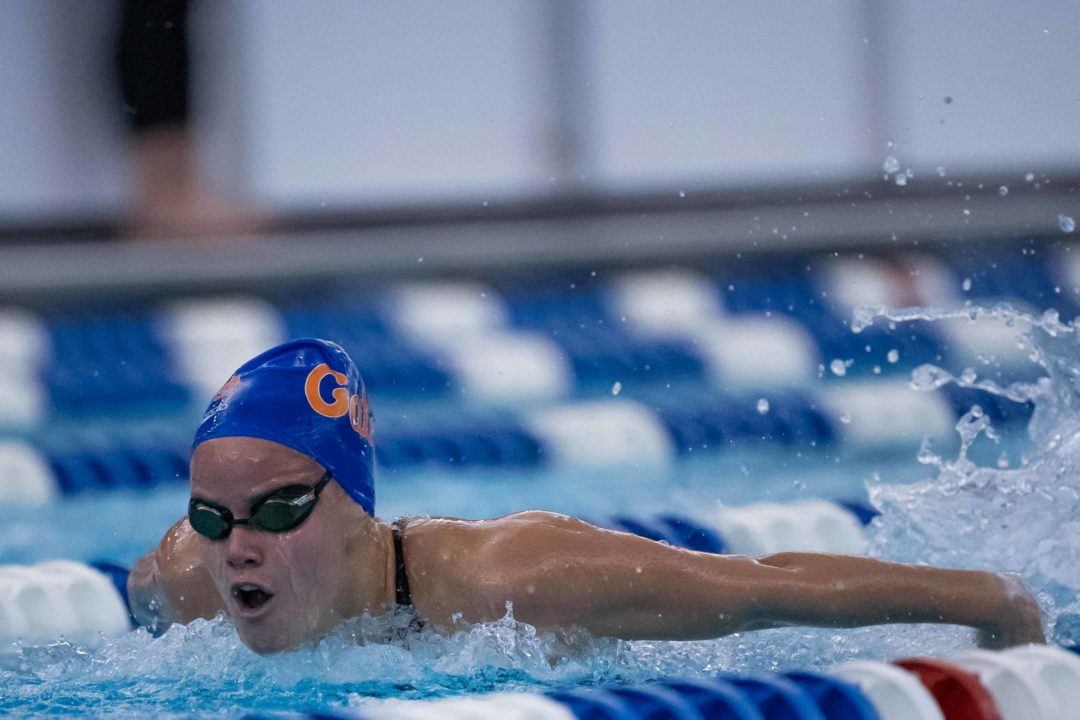 Florida freshman Mabel Zavaros has qualified for the 2019 NCAA Championship meet, in her first season as a collegian. At that... Archive photo via Mike Lewis/Ola Vista Photography

Florida freshman Mabel Zavaros has qualified for the 2019 NCAA Championship meet, in her first season as a collegian. At that meet, she’s taking on one of the most difficult individual event lineups possible.

Zavaros only swam 1 relay at SECs, the 800 free relay, and a similar plan at NCAAs will at least leave her without a triple on Saturday at NCAAs.

Many swimmers have swum the 200 back and 200 fly at NCAAs in different years, but few have dared the double at the same meet. The last swimmer that we could find who took on this schedule was Meg Brown, who in 2016 swam the 400 IM, 200 fly, and 200 back at NCAAs (with no relays). She missed her seed time in all 3 events, finished near the bottom of the rankings in each, and dealt with some injuries throughout the rest of her career: never returning to the NCAA Championship meet (she’s currently a senior).

Before that, two swimmers attempted it at the 2014 NCAA Championships. One was then-Cal freshman Sophia Batchelor, who was 16th in the 100 fly on (then day 2) of the meet. In the 200 fly, she improved her season-best by .15 seconds and finished 21st, then dropped 7-tenths from the 200 back season best and finished 17th. That was her one-and-only season at Cal before transferring to Florida (the same school that Zavaros attends).

The other swimmer to attempt that double in 2014 was Elizabeth Beisel: who by then was a 2-time Olympic medalist (silver in London in the 400 IM, bronze in the 200 back). She took on the swam 400 IM/200 fly/200 back entry list as Zavaros is, and holds the distinction, by our research, of being the last swimmer to try this double and actually score. That year, she was 5th in the 200 back (1.5 seconds slower than her season best) and 15th in the 200 fly (she added over a second from seed to prelims, and then another 2+ seconds from prelims to finals).

Zavaros herself took on the double at the mid-season Georgia Tech Invite. Her 200 back, the first of the two events, went well, and she swam a 1:53.10 that is her season-best and the time that qualified her for NCAAs. In the 200 fly, she did go what was at that time a season best of 1:58.43, but just barely – and she later beat that time at an early-January tri with Florida and Ohio State. She was 2 seconds faster at SECs, without having to swim the 200 back first.

Needless to say, history isn’t on the side of success in such a grueling lineup.

If Meet Mobile is accurate, it was Mabel’s sister Rosie, not Mabel, who swam in the 800 free relay at SECs.

The official results PDF says it was Mabel: https://cdn.swimswam.com/wp-content/uploads/2019/02/2019-SEC-swimming-MW.pdf

We’ll ask and see if we can clarify the discrepancy. The 1:46 split seems much more like a Mabel split, but will double-check with Florida to be certain.

That would make more sense. I only saw the Meet Mobile results.

Was able to confirm that it was Mabel.

That’s a huge insult. She was way tougher than nails.