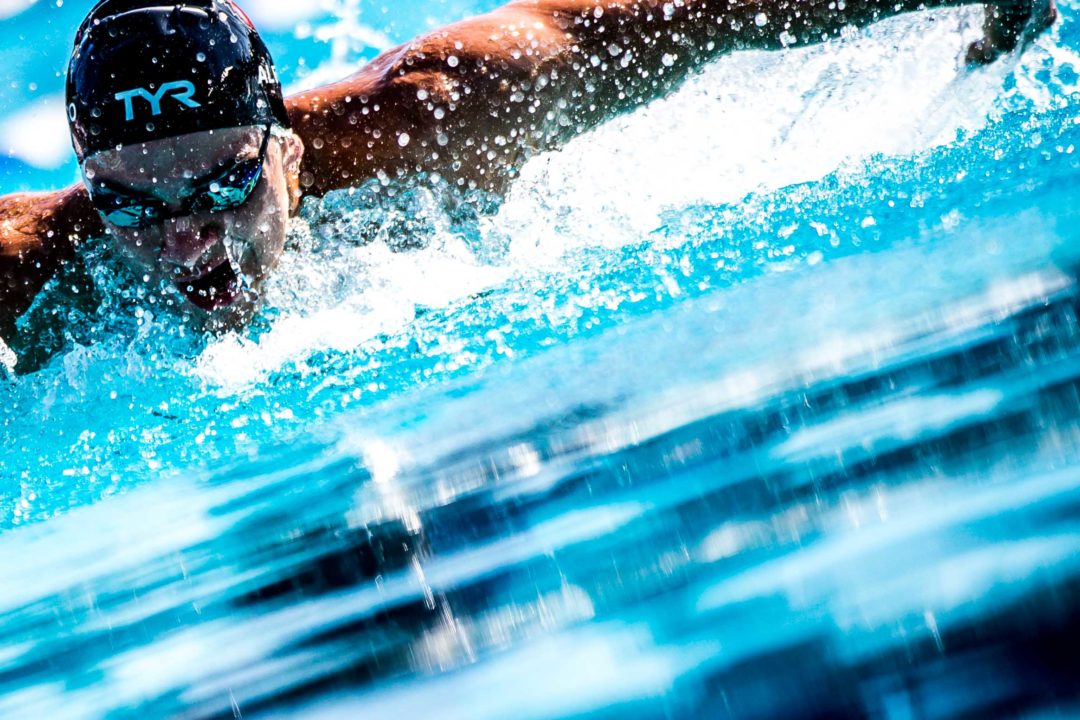 Today’s dual meet between Louisville and Missouri looked a little different due to COVID contact tracing procedures, but that didn’t mean the meet was bereft of swift swimming. Louisville announced in its release that head coach Arthur Albiero missed the meet, as he was quarantined “for COVID contact tracing protocol measures,” but he was far from the only Cardinal missing from the pool today.

Louisville officially only addressed Arthur Albiero missing, but both of his children on the team, Gabi and Nick, were noticeably absent, along with several other Louisville women, enough that the women’s meet was unscored. While Nick is an All-American, the Cardinal men barely seemed to miss a beat as they downed Missouri 199-101.

Arguably the biggest swim of the day came in the very first event on the men’s side, the 200 medley relay. Mitchell Whyte led off in 21.58, Evgenii Somov split 23.80 on breast, freshman Dalton Lowe, filling in for Nick Albiero, threw down a 20.37 fly leg, and Haridi Sameh anchored in 19.32, touching in 1:25.07. Louisville is looking like the early favorites to win this relay at ACCs, where last year they touched first before being DQ’d for an early start, and it’s unreasonable to suggest that they could be in the mix for a top three finish come NCAAs.

While Louisville’s release only mentioned Coach Albiero being quarantined due to Covid contact tracing protocol, Missouri’s release mentioned that the women’s side of the meet was unscored “as Louisville’s women’s program dealt with COVID-19 protocol.” We don’t have any official word on the reasons for their absences, a quick glance through the results from tonight versus last week’s meet against Notre Dame shows noticeable absences from Christian Regenauer, Paige Hetrick, and Maria Sumida, besides Gabi Albiero.

Despite the absences, the Cardinal women got the pool rocking quickly, winning the 200 medley 1:38.18 to 1:38.71. While Mizzou’s Megan Keil split a speedy 21.98 on the anchor leg, it wasn’t enough to overcome the lead Louisville built on the first half, where Ashlyn Schoof led off in 25.29 and Kaylee Wheeler smoked a 26.41 breaststroke split. Wheeler would later win the 100 breast with a 59.39, the only women to break a minute, and split 49.43 on Louisville’s 400 free relay.

“I am proud of the way the men raced and used today as a step in the process toward the postseason,” said Chris Lindauer, the UofL assistant coach who was acting in Albiero’s stead.  “We took advantage of every opportunity. We had positive team energy and won the small details which was what led us to a great team win today.”

The Cards won both diving events, both relays and seven individual events to seal the win. Haridi Sameh won the 50 free and was on both relays. Hayden Curley won both distance events with firsts in the 1650 freestyle and the 500 free. Mitchell Whyte helped win the 200 Medley Relay and then won both the 100 and 200 backstroke. Daniel Pintowon both the 3M and 1M boards to further highlight the day.

“It was definitely a different experience to watch the meet from my computer at home due to the quarantine,” said Albiero. “Major props to our coaching staff who got the team ready to compete today. There were plenty of highlights on both the women’s meet and the men’s meet and it was great to see a number of swimmers stepping up and performing well for the team in crucial moments.”

Evgenii Somov got his hands to the wall in 53.37 for second place in the 100 breaststroke, followed by Aidan Kreiley in 56.38 for fourth.

Greyson Alarcon dipped under the 1:50-barrier in the 200 butterfly with a time of 1:49.42, fast enough for second place.

“I am very pleased with how the divers competed today, said Ryan Rougeux, UofL diving coach. “We have ony been in the pool for a couple of days following winter break, so it is great to see the divers put together solid performances at this time in the season. I attribute their performance today to their positive attitudes and the camaraderie  we have built over the past few months training together. Today was exciting , you could feel the energy. I am ready to carry that over into next weekend  when we tak on in-state rival Kentucky.”

Dalton Lowe crushed the field in the 100 butterfly, winning the event by two seconds, posting a time of 46.72

The Cardinals head to Lexington, to face rival Kentucky on Jan. 23 at 1 p.m.

LOUISVILLE, Ky. – The No. 8 Mizzou men’s swimming and diving team hit the pool for the first time in two months, falling at No. 13 Louisville, 199-101, on Friday afternoon at Ralph Wright Natatorium in Louisville, Ky. The No. 13 Tiger women competed in an unscored meet against the Cardinals as Louisville’s women’s program dealt with COVID-19 protocol.

On the women’s side, freshman Jane Smith (Palatine, Ill.) dropped five seconds off her 1000 free personal best with a swim of 9:54.60, which moved her into fifth all-time at Mizzou in the event.

In addition to Smith, other Tigers who placed first in the unscored women’s competition were senior Sarah Thompson (Collierville, Tenn.) in the 50 free and 100 fly, junior Sarah Rousseau (Melbourne, Fla.) on 1-meter and 3-meter and sophomores Alex Moderski(McFarland, Wis.) in the 100 free and Meredith Rees (Colorado Springs, Colo.) in the 100 back.

Associated Head Coach Alec Hayden
“We knew this was going to be a tough meet and we were excited for the challenge. We were without two of our team leaders and raced on tired legs coming off our toughest two weeks of training this year. Louisville swam very fast but we were proud of how our team responded. We didn’t get the win but our men never backed down and competed hard through the end of the meet.

Associate Head Coach Tracy Martin
“I’m really proud of the women’s team. We had some great performances in the pool and on the boards. We are in a great place and have set ourselves up to have successful championships meets.”

Mizzou didn’t have Danny Kovac or their backstroker Jack Dahlgren. Why wasn’t this mentioned?

Would not have made a difference

Please tell me they had suits on.