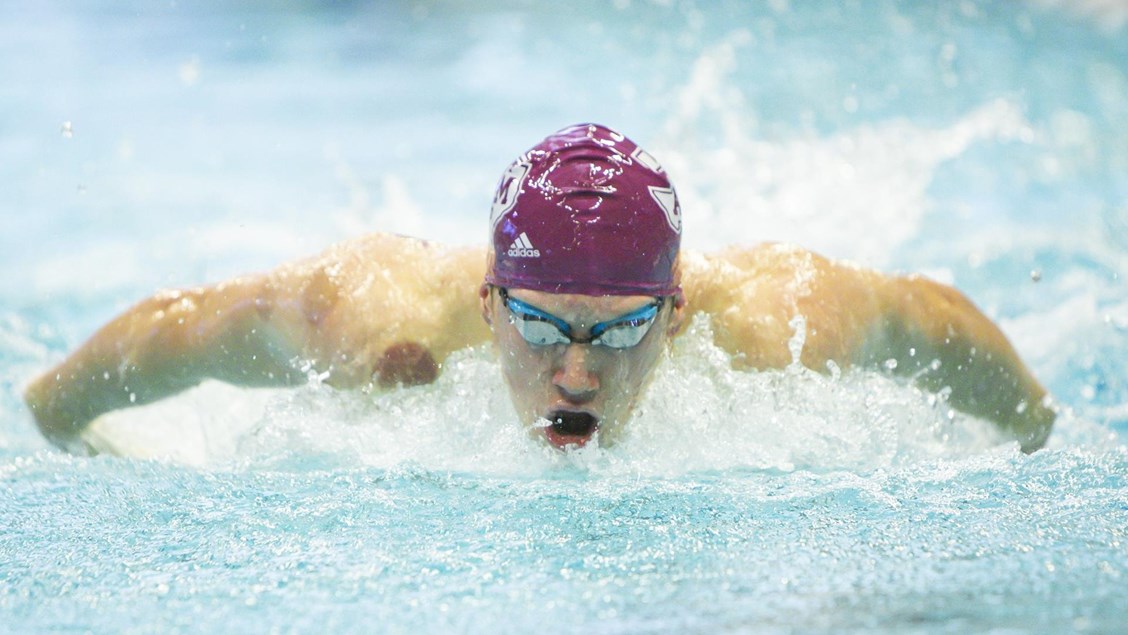 The Texas A&M Aggie men won their first dual meet of 2021 against the Southern Methodist (SMU) Mustang men. The Aggies now improve to 2-1 this season. This dual meet loss signaled the SMU Mustangs’ first loss of the season after winning dual meets against TCU and Incarnate Word, making their current dual record 2-1.

Aggie front-runners Shaine Casas and Mark Theall were not present at this meet due to their participation at the 2021 Pro Swim Series in San Antonio. Despite their absences, the Aggie men defeated the Mustang men 170-130 with 10 event wins.

Texas A&M junior Kaloyan Bratanov was one of three Aggies to earn two wins at this meet. Bratanov first won the 200 free with a 1:37.19, touching ahead of teammate Elijah Sohn (1:37.56). Then into the 100 free, Bratanov faced a tight battle against SMU senior Daniel Forndal and Sohn. At the touch, Bratanov touched out Forndal by one one-hundredth to win 44.39 to 44.40. Sohn took third at 44.82.

The 50 free featured another tight race as the SMU Mustangs took a tight 1-2 finish, led by Justin Baker (20.49) touching out teammate Lance Butler by one one-hundredth. Texas A&M freshman Kraig Bray took third in the race by four one-hundredths at 20.54. Later on in the 200 free relay, the Texas A&M relay held the slight lead until anchor Baker hit the water. The SMU sophomore then split the fastest 50 free of the meet at 19.61, enough to overtake Texas A&M for the win 1:20.39 to 1:20.77.

DALLAS, Texas – The No. 4 Texas A&M men’s swimming & diving team return home with a win after a dominating performance against SMU at the Robson & Lindley Aquatics Center. The Maroon & White highlighted the dual meet with 10 first-place finishes on the day.

Up Next:
The Aggies will return to action as they compete against LSU on Jan. 23 at the Rec Center Natatorium. Seniors will be honored prior to the final dual meet of the season.

First place finishes are marked with *

DALLAS (SMU) – The No. 25 Mustangs won five events in a 170-130 loss to No. 4 Texas A&M at the Robson & Lindley Aquatics Center and Barr-McMillion Natatorium on Friday afternoon.

Prior to the event, the Mustangs honored seniors Stephen Cheng, Daniel Forndal and Caleb Rhodenbaugh for their contributions to the program.

The 50-yard freestyle saw Justin Baker clock a 20.49 for the win. He narrowly out-touched teammate Lance Butler by the smallest of margins, who finished in a season-best 20.50.

The event closed with a win in the 200-yard freestyle relay with Butler, Forndal, Charlie Kaye and Baker sprinting to victory in 1:20.39. SMU finished second in the opening 200-yard medley relay as Riley Hill, Rhodenbaugh, Jack Easton and Forndal teamed up for a 1:28.59.

In diving action, Dominic Hoefer led the way with a victory on 3 meter, finishing with an NCAA Zone score of 358.20. Peter Smithson was third in the event, also above the NCAA standard, at 320.33. Smithson led the way on 1 meter with a season-best, NCAA score of 344.10 for second place, while Hoefer also stayed above the NCAA’s mark, finishing third at 305.03.

The Ponies also grabbed a runner-up finish in the 100-yard freestyle from Forndal, clocking in at 44.40.

The Mustangs return to action Saturday, Jan. 30 when they host Missouri State at 11 a.m. The meet is scheduled to begin at 11 a.m. and will be streamed on PonyUp TV with results available on the Meet Mobile App.

Yep!! The wheels of success just keep on “rollin & rollin along”!! Dividends for all that hard work for everybody are just around the corner!! Hang tight!! I can hardly wait👍👍