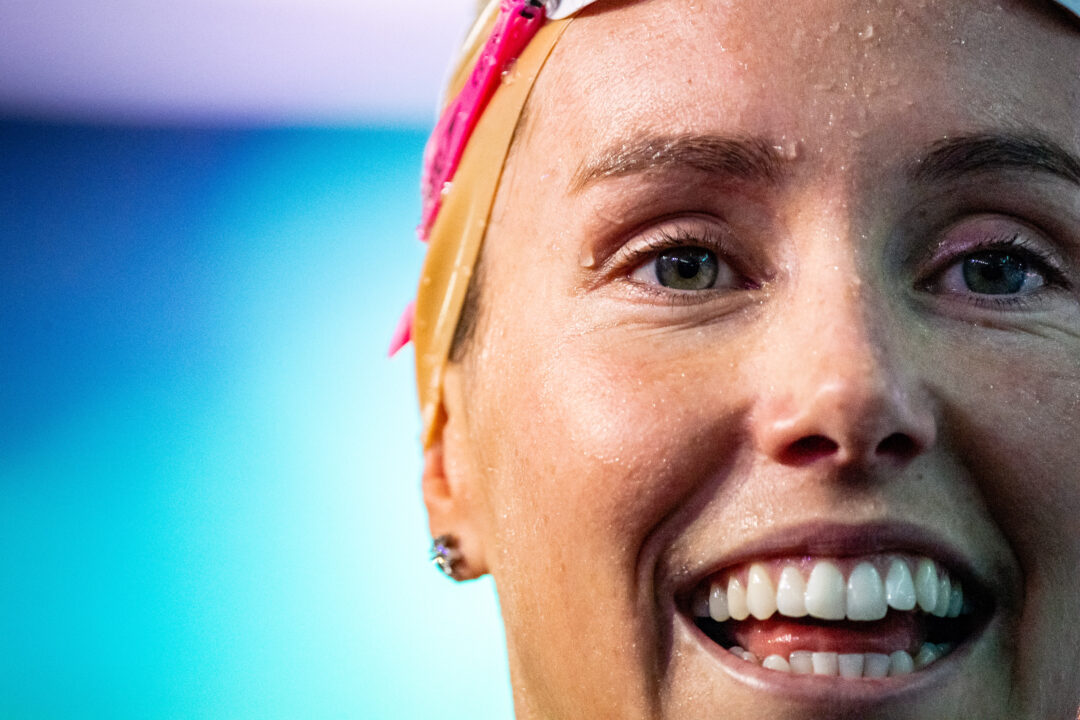 Many of the Roar's Australians will opt to train at the University of Stirling, home of multi-Olympic medalist and fellow Roar teammate Duncan Scott. Archive photo via Giorgio Scala / Deepbluemedia / Insidefoto

With London Roar set to battle Energy Standard, Toronto Titans and DC Trident today and tomorrow for International Swimming League match #9, several of the squad’s members are already making plans for where they’ll head leading up to the Eindhoven playoffs in November.

Many of the Roar’s Australians will opt to train at the University of Stirling, home of multi-Olympic medalist and fellow Roar teammate Duncan Scott. This includes the likes of Olympic superstar Emma McKeon and double Olympic bronze medalist Zac Incerti.

However, breaking from that plan is freestyle weapon Kyle Chalmers, who will instead be heading to Canada for the interlude, training with Roar compatriot Sydney Pickrem.

Although not on the Roar, another Aussie ISL swimmer has upcoming plans that don’t involve her returning to her native country.

LA Current’s Madi Wilson is headed to Berlin and Budapest for those stops of the FINA World Cup Series before participating in a short training camp in Israel and then wrapping up the World Cup’s last 2 stops. The tie-in here is that LA Current coach David Marsh coaches the Israeli national team.

The FINA World Cup schedule for this season is as follows:

27-year-old Wilson was dealt a racing blow as the freestyle and backstroke dynamo tested positive for COVID-19 and was hospitalized, rendered out of match #8.

“ However, breaking from that plan is freestyle weapon Kyle Chalmers, who will instead be heading to Canada for the interlude, training with Roar compatriot Sydney Pickrem. ”

👀👀👀 My gossipy question on here about these two last week might have been right!

Thought he was with Madi Wilson

My only info on that comes from a Feb 2021 news article on the Daily Mail (I know, I know) that says Kyle and Madi broke up for the second time.
But I may be way off base and they’re just training buds!

We don’t have any information about whether they’re together romantically, however, they are ISL teammates and co-captains.

I think a lot of people are going to have to wrap their heads around the different dynamics that are going to come from a co-ed professional sports team like in the ISL. That’s not common across the landscape.

Who wood gossip girl be in the swimming world? My moneys on Michael Phelps pulling the strings from the shadows

He knows everything about everyone’s families.

Hey now, guys can have friends as a girl and a girl friend

He mentioned he needed to see a reptile guy friend after Toronto or sth like that. In the podcast with pullbuoy

YAAAAASSS, you hit it! They’re a couple 🙂

Stirling in October, must be going for the weather.

British press crying about Russia not giving them gas so everyone will freeze . Not that they had any contracts at all .Minister helpfully said it is colder up north .& hope for warm weather.

Scotland produces energy and exports it to rUK.
England imports from Scotland Wales France and Netherlands
Swimmers should get good coaching in Stirling with Tigg

First we convince Hayden to continue to 2024, then we reel back Condorelli from Italy, Pickrem convinces Kyle to switch citizenship, then add Liendo into the mix and watch out for Canada’s 4×100 free relay in Paris haha

Except no thanks for Condorelli. He seems toxic.

True. Kisil is much more fun

After seeing Sydney’s IG post today, I am now convinced she has seen this speculation and is trolling us. Well played, Syd 😂👏