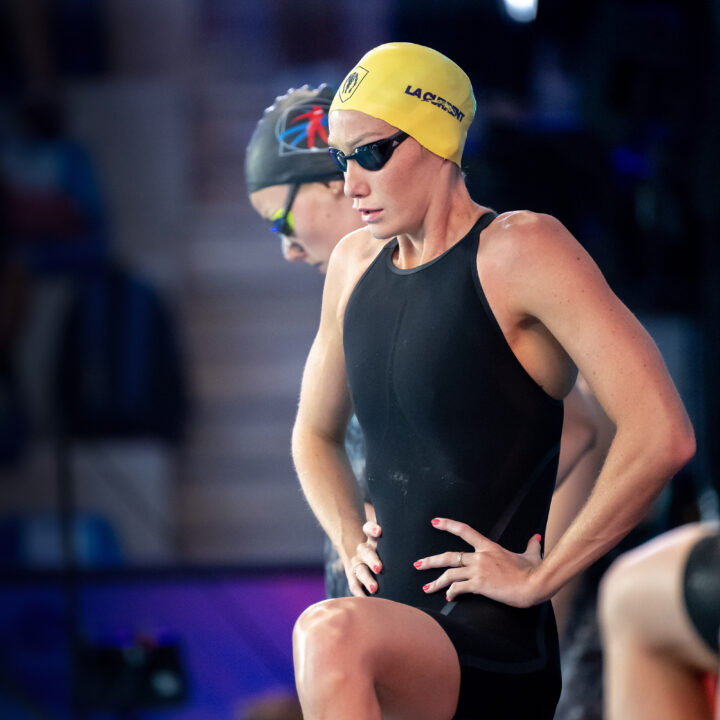 Australian swimmer Madi Wilson, representing the LA Current, has tested positive for COVID-19 in Naples and has been hospitalized in spite of being vaccinated. Archive photo via Giorgio Scala / Deepbluemedia / Insidefoto

Australian swimmer Madi Wilson has been hospitalized in Naples, Italy as a result of a COVID-19 infection in spite of being fully vaccinated, she announced on Instagram this morning.

Wilson, who is a member of the LA Current, says she is “extremely disappointed” to not have raced in Match 8 earlier this week.

Wilson was fully-vaccinated with Pfzier before departing for the Tokyo Olympics in July, like most of her Australian teammates.

“I am extremely disappointed and upset not to be racing along side my teammates in match 8 here in the ISL. I recently tested positive for covid and yesterday was moved into hospital for further care and observation. Even though I am double vaccinated and took the right precaution set in place through the ISL, I have managed to fall to this virus. It’s been a crazy few months and I believe being run down physically and mentally may have made me more susceptible. I feel extremely unlucky but I do believe this is a huge wake up call, Covid is a serious thing and when it comes it hits very hard. I’d be stupid not to say I wasn’t scared. I’m so lucky for all my family, friends and support people. I can’t believe how much love I have been shown and I’m forever in debt to these people.”

Wilson told SwimSwam on Sunday that she has “no idea” where she might have caught the virus from. Wilson also says that she has asthma – individuals with asthmas are more likely to be hospitalized from COVID-19, according to the CDC.

While hospitalizations of fully-vaccinated individuals are rare, they do happen. The CDC in the United States reports that vaccinated patients make up just 2% of people hospitalized for COVID-19.

Such cases are even rarer in Australia, which has much lower infection rates of COVID-19. While Australia is currently seeing its highest rates of COVID-19 infection of about 1,800 new cases daily, that rate of 7 cases/100,000 of population is still lower than most of the developed world. Cases have been rising globally as a result of the more infectious Delta variant.

Australia prioritized Olympians in its vaccination scheme, fearing that they might bring cases back from Japan to a country that, at the time, had almost no COVID-19 infections as a result of strict quarantining measures for individuals entering the country. In Tokyo, she finished 8th individually in the 200 free and won gold as a prelims-only swimmer in the 400 free relay and bronze as a finals leg of the 800 free relay.

Wilson, like most ISL participants, has been in Italy for weeks though, so that’s likely where she picked up the virus. Unlike last season in Budapest, athletes have not been in a full ‘bubble’ this season, and are free to go out into public, including bars and restaurants, within local guidelines. Those local guidelines include vaccine mandates for most indoor gathering places.

Athletes are still staying in their own rooms, however, which could be helping to keep the few infections from spreading throughout teams.

The ISL says that the same protocol was followed as for other infections this season, which means a brief quarantine for the Current team, which would have been released after other members tested negative. While a full accounting of positive tests have not been announced, SwimSwam has previously reported that the New York Breakers had an athlete test positive, while Iron had a staff member test positive (which is suspected to have been a false positive). The identities of those individuals have not been released.

Like in the prior two situations, the ISL says that nobody else on the team tested positive in follow-up testing.

Wilson was LA’s top scoring female through the club’s first three matches this season, compiling 108.5 points to sit 14th overall in the ISL upon the conclusion of Match 7.

She has swept the women’s 200 freestyle in all three of her match appearances, topping the field in Match 2, 4 and 5, and has also won the 400 free (Match 4) and 100 free (Match 5) during the season while also playing a pivotal role on relays.

The LA Current are currently in 3rd place in Match 8, 9 points ahead of the Tokyo Frog Kings

Italy has reported an average of 4,361 new cases of COVID-19 per day over the last week, which is about 7.2 cases/100,000 people, along with 57 deaths per day. Those reported case counts have been declining amid a push to get more individuals vaccinated. According to Bloomberg data, enough vaccines have been administered to cover 68.1% of Italy’s population

The nation has had over 4.6 million total cases and over 130,000 deaths since the beginning of the pandemic, with over 113,00 current active cases.

Oh noo , I hope she will recover fast

Really sad. How can we be sure it hasn’t spread to other swimmers?

If only we had a test available. smh

Through the testing the league is doing……..

Athletes are tested regularly. As much as we trust the ISL testing system (which, is up to you to decide, because it’s not very transparent) is as much as we can trust that it hasn’t spread.

Fully vaccinated people can still spread COVID-19, but early data says that they may transmit at a lower rate. So, that’s the good news here.

I’d be surprised if at least one of her teammates doesn’t test positive now, but hopefully the testing protocols will keep this from being a widespread outbreak. I’m sure those swimmers are spending a lot of time together.

Get your danged vaccines folks. This virus is going away any time soon. Hope she has no long term effects.

the most efficacious vaccine ever produced!

She might be way sicker without it. And unvaccinated people are spreading the virus!

Y’all, save your energy. Hswimmer KNOWS this. He just doesn’t CARE. It’s not that he’s an IDIOT, he just has absolutely zero empathy and an overwhelming drive to win and pwn libs.

Even his lord and savior Donald Trump told him to get the vaccine, and he still won’t.

Conservatives don’t own anything other than a monopoly on fear and lack of common sense. The entire pandemic has been about making logical intelligent choices to reduce exposure and risk. It is no different than any sport including swimming where the proper methods and intelligent application maximize the bottom line. Good thing Idaho isn’t the swimming mecca of the United States

Vaccinated are spreading it too…. Lol

we get it Hswimmer, you don’t believe in science. You and your team manages to “help” the country loose thousands of people to the virus a day, that would be completely avoidable if it weren’t for your “freedom”

They are, but dramatically less. All the data suggests that vaccinated people are shedding virus for a much shorter period of time than the unvaxxed are. Vaccines are absolutely our number one line of defense against Covid.

Technically our second line of defense. Natural immunity is #1, but the problem with that is you have to get Covid and survive it first.

I’m sure Sam B could back me on that since that’s what the scientific studies are finding.

I think the jury’s still out on whether natural immunity is better or not, but yeah, since the whole idea is to reduce the number of cases it’s a bit of a moot point. Vaccinations are our best defense.

“While hospitalizations of fully-vaccinated individuals are rare, they do happen. The CDC in the United States reports that vaccinated patients make up just 2% of people hospitalized for COVID-19.”

Ok and what’s the percentage of people dying from covid?

August: “Fatal cases of COVID-19 among vaccinated people are either very low or virtually zero in 48 states.” (Healthline)

“1,587 total deaths among unvaccinated” (Healthline)…. of 650,000 total death in pandemic. Not exactly apples to apples, since this includes a time frame when there was no vaccine.

As the AP wrote in May, “Nearly all COVID-19 deaths in the U.S. now are in people who weren’t vaccinated, a staggering demonstration of how effective the shots have been and an indication that deaths per day — now down to under 300 — could be practically zero if everyone eligible got… Read more »

really need to get out from under that rock

In the US? You can do the math. If 40+ million Americans have caught COVID, that means 1 of every 8 Americans have had it. If you divide the number of Americans that have had it vs the number that have died, once you catch it, you have a 1 in 61 chance of dying from it. Now do that same calculation with number of breakthrough infections/deaths and it will become very clear that you are far better off having the shot than being without it.

what does that have to do with anything? Do you live under a rock?

Stupid is as stupid does. Darwin.

Say what? She had vax

First of all wishing Madi a speedy recovery hope she gets well soon. Second are people so stupid that they think a vaccine means COVID is over. The vaccine only reduces the severity of the virus if you contract it which means you are less likely to be hospitalised or die from the virus, it’s still possible but less likely. The vaccine also helps reduce the viruses transmission rate but it does not mean we will eradicate COVID, it is unlikely we ever will due to how infectious it is we can only hope to reduce the impact it has on our lives.

Yeah I hope she get’s better soon. I agree with your second point everyone is so fast to bring up how you can still get sick with the vaccine but i like to think of it like driving with or without a seatbelt sure people have died in been killed while wearing one and the majority of the time if you drive without a seatbelt you won’t die but if you get into a minor accident without a seatbelt it can turn fatal.

Instead of talking about death ,can someone deliver luxury satin pyjamas for Madi ? I am happy to contribute because A gal must look in hospital .

Yes. This is the case. Also, the hurricane/fire/flood will not get them. God will save them.

And less likely to be hospitalised mens less stress on our hospital systems and the poor staff who work there……less expense and less spending of tax dollars.

The data is super clear. Example – Per the The North Carolina Department of Health and Human Services Report on actual patients, vaccination reduces risk of infection by a factor of 4.4 and risk of death by a factor of 15.4. Those who are still warbling on personal choice and freedom need to stop watching OAN & Fox, grow a brain, get vaccinated and follow the science. read below: