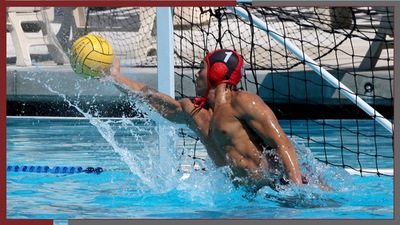 DAVIS, Calif. – Despite dropping three contests at the AGGIE Roundup, the University of Redlands Men’s Water Polo team picked up quality experience as they head back into Southern California Intercollegiate Athletic Conference (SCIAC) play this week.

The Bulldogs battled in the opening quarter against the Lancers seeing themselves trailing only by one.  Tor Cole (Malibu, CA) went back to back early to give UR an early 2-0 lead and Spencer Clinton (Cypress, CA) extended that to 3-1 a few minutes later.  The difference in the game came in the second period where UR was shutout 4-0 that allowed CBU to take an 8-3 lead into the break.

Ron Gvishi (Albany, CA) would connect in the 3rd Quarter that gave the Bulldogs some momentum and they would carry that into the 4th when they outscored CBU 6-5 getting goals from Drake Moody (Camarillo, CA), Max Wagener (Piedmont, CA), Cole and Michael Driscoll (Escondido, CA).  This late push though wouldn’t be enough as Cal Baptist would hold on for the win.

UR finished with 29 shots, were 2-for-14 on power-plays and were perfect on penalties 3-for-3.  Liam Murphy (Placentia, CA) played all 32:00 minutes between the posts finishing with 10 saves, two steals and a .385 save percentage.

In the nightcap UR had to take on a tough Santa Clara squad.  They again started strong trailing only by one in the opening frame with goals coming from Cole and Wagener.   But again the 2nd quarter would cause problems as the Broncos would outscore UR 8-3 that moved the score to 12-6 at the break.

Out of the half both teams put up three goals in the 3rd quarter with the Bulldogs getting connections from Cole and Emerson Kropp (Denver, CO).  Then in the 4th, Redlands would tack on another three but it wouldn’t be enough as Santa Clara would cruise to the victory.

UR took 32 shots on the game with a .375 shot percentage, while going 3-for-9 on power plays.  Brandon Khalil (Bakersfield, CA) and Murphy split time between the posts.  Murphy finished with six stops and Khalil with five.

With much needed rest the Bulldogs came out strong on Day 2 action against a tough San Jose State squad.  UR got their offense going early with a pair of goals in the 1st quarter from Gvishi and Moody.  They kept it going in the 2nd putting up another five, which included two equalizers from Gvishi and Moody.  They also got another tally from Andrew Sorensen (Long Beach, CA).

This pulled UR within one at the break 8-7.  But that’s as close as they would get as the Spartans would outscore the Bulldogs 7-2 in the second half en route to the six goal victory.

Khalil got the start in goal finishing with eight saves and a .471 save percentage.  Jason Gates (San Jose, CA) was able to see time and added another three stops.