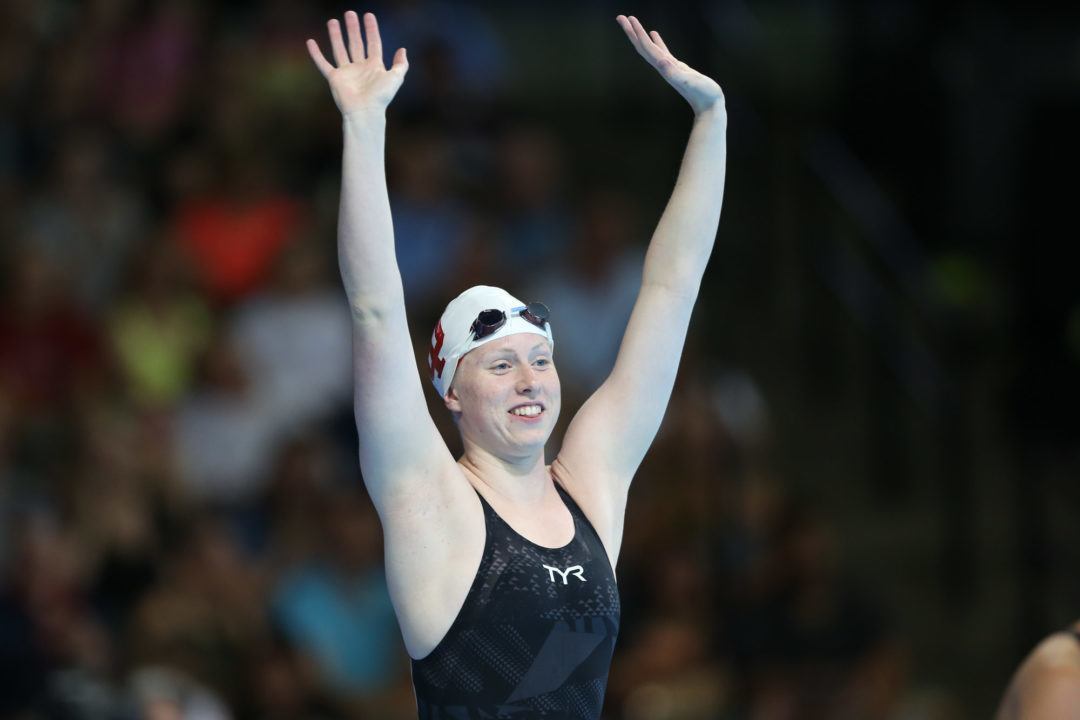 In an emotionally charged 100 breaststroke final, American Lilly King backed up her pre-race talk with an emphatic win and an Olympic record of 1:04.93, taking out Russian Yuliya Efimova who she has created a bit of a rivalry with here in Rio.

King’s swim removes Australian Leisel Jones‘ Olympic record of 1:05.17 from her 2008 Olympic gold medal performance, but the record no doubt takes a back seat to the victory over Efimova.

She had some choice words after the race, stating “you put your finger in the air for number one and you’ve been caught drug cheating…I’m not a fan”.

Tension was high behind the blocks, with King clearly giving Efimova a dirty look prior to the race. Afterwards, she celebrated with American teammate Katie Meili, who won bronze, barely acknowledging Efimova.

Efimova did win silver in 1:05.50, and Meili won bronze in 1:05.69. Surprisingly, 2012 gold medallist Ruta Meilutyte was nearly two seconds off her London time, finishing 7th in 1:07.32. She had also let her distaste for FINA’s allowance of Efimova earlier in the doping scandal via twitter.

efimova performes 1.05 all her life
this girl takes 1 second off her time next to trial where she posted a pb time too and then is efimova who is dopping…
are you blind?
as you say, not testing poitive do not mean anything

All her life. That is nicely put. She consciously cheated before, was punished and the only regret she expressed that she was caught. This temporary ban happened between between Olympic Games and World Championships. No damage was done since she continued to train with the same coach in the same environment. That made her joke about this ban. Nothing change with her attitude and with her disrespect to norms of fair competition. The lies about medical necessity of taking meldonium is just another proof that she is wired on cheating and will never give up on that. As you said – all her life.

We’re not blind. We can see tha Yulia was banned twice for PED’s, and Lilly has never tested positive nor been banned. If she ever does test positive, you can rest assured that she will get the same treatment. Until then we applaud her talent and hard work induced time drops.

Billabong – as an editor, I’m not here to interject what peoples’ opinions should be on each swimmer, that’s up to each of our readers, but I do think it’s important to establish accurate facts – Efimova was only banned once for PEDs, not twice. She tested positive twice for banned substances, but was only banned once.

efimova performes 1.05 all her life
this girl takes 1 second off her time next to trial where she posted a pb time too and then is efimova who is dopping…
are you blind?
as you say, not testing poitive do not mean anything

Shouldn’t we raise the question who coached her in the U.S. after she was booted off of all US club teams too?

I feel for Shi Jinglin, the bronze should be hers, the silver should be Meili’s.

such a disgrace that both the IOC and FINA do not have the guts to ban Efimova and all the other cheaters !

I would like to buy Lily King a beer. And it’s OK because she’s legal where I live.