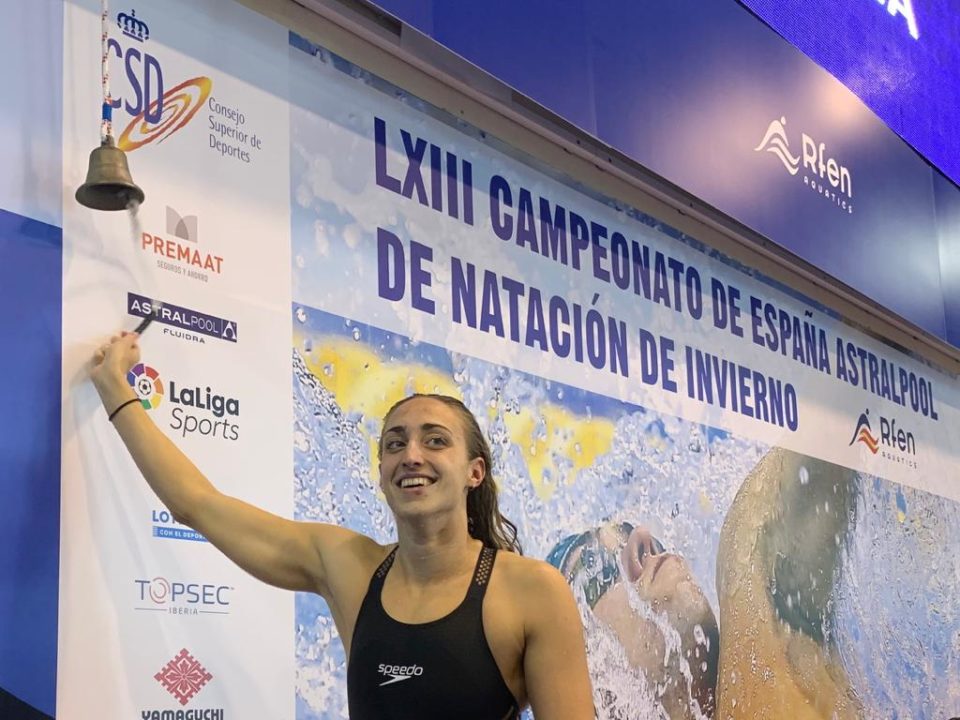 Lidon Munoz (above) rang the ball on 5 Spanish Records this week at the Spanish Open Short Course National Championships. Archive photo via RFEN

5 new Spanish Records were broken this weekend at the Spanish Shrot Course Swimming Championships in Gijón this weekend, all of which were broken by (or by partial hand of) a single swimmer – 23-year old Lidón Muñoz.

En route to an 8 gold medal, 2 silver medal performance, the swimmer from CN Sant Andreu led her team to the women’s title at the meet. Real Canoe won the men’s event.

Starting with the 100 IM, Muñoz’s winning time of 1:00.68 shaved a mere .01 seconds off her record set last December at the World Short Course Championships. That was an auspicious start to what would explode into an electric week for her as she takes the mantle, for now, as the new Spanish star with Olympic champion Mireia Belmonte absent from the meet.

Her team also won gold in the women’s 200 medley relay in the morning session on day 1.

On day 2, she picked up 3 more gold medals thanks first to a win and a new Spanish Record in the 100 free. She swam a 52.61 to break the old mark of 53.02 that was set by Maria Fuster in late 2009 – almost a decade ago in a now-banned polyurethane supersuit. Spain still has a number of those records remaining on its national books, but one fewer than they did previously. Muñoz’s previous best time was a 53.18 from last year’s Spanish Championships.

Earlier in the day, she led off Sant Andreu’s 200 free relay in 24.16 as the team of her, Marta Gonzalez, Africa Zamorano, and Laia Sicart combined for a 1:39.90. Even as a club relay, that swim broke the Spanish National Record in the 200 free relay (which also belonged to this club from a 2016 swim).

On day 3 of the meet, Muñoz earned one of her 2 silver medals to kick off the session, swimming a 1:56.63 in the 200 free. She was only nipped by 16-year old Ainhoa Campabadal, who won in 1:56.59 after overtaking Muñoz with a very fast 3rd 50 split of 29.16 – a full second better than Muñoz was on the same leg. Despite not winning, that was another lifetime best for Muñoz.

In her next race, the 50 fly, she again took just silver. If Muñoz comes away with one disappointment in this meet, it will be there – she tied the Spanish Record in prelims with a 26.42, but in the final, she got a little slower (26.59) and Aina Hierro got a little faster, swimming 26.46 to win and almost take out the National Record again. Neither swimmer was under the time to qualify for Euros, however, which was a tall order at 25.98.

She finished the day on a higher note, taking another gold medal as part of Sant Andreu’s women’s 400 free relay, which again won running-away in 3:38.55.