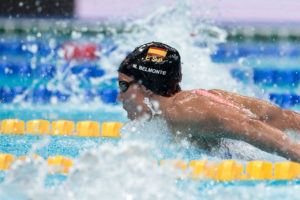 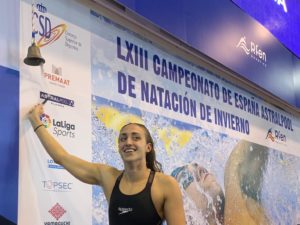 Lidon Munoz (above) rang the ball on 5 Spanish Records this week at the Spanish Open Short Course National Championships.

The Spanish Federation added Lidón Muñoz and Joan Lluis Pons to the World C’ships roster and published the events that each swimmer will race. 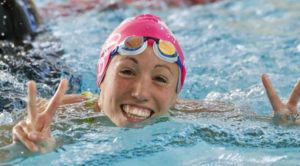 Marina Garcia
Marina Garcia is a breaststroke phenom from Barcelona, Spain. Born July 6, 1994 to parents, Luisa and Miguel Angel Garcia, she’s currently a sophomore at the University of California, Berkeley. Although undecided on her major, Garcia filled a huge whole in the Cal Berkeley lineup. With a team full of young Olympians and National Team members, Garcia fit right in and added Cal’s widely criticized need for a breaststroke relay leg. She’s a 2012 Olympian for Spain and has been a member of the Spanish World Championship Team. Her family is full of some great athletes, and her brother, Guillem, was a member of Spain’s national water polo team. Standing 5’5″ Garcia ranks in Cal’s top-10 in both the 100 and 200 breaststrokes.

International Competition
At the 2013 FINA World Championships she finaled in both the 100m and 200m breaststroke events. She also picked up a 10th-place finish as a member of the 400m medley relay.