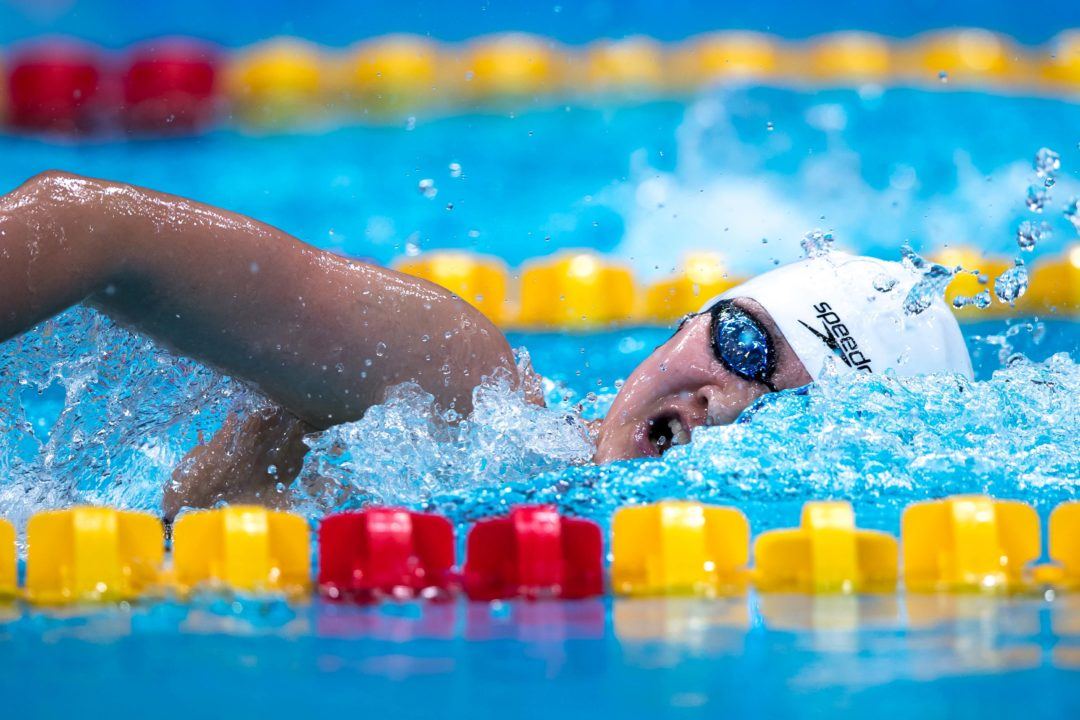 Over the last several months, China’s top swimmers have been preparing for the upcoming Short Course World Championships at the Training Bureau of the General Administration of Sport of China, specifically zeroing in on dryland training.

In November, this included targeted tests in things such as 30-meter sprints, vertical jumps, bench press and pull-ups, while previously they focused on exercises such as box jumps, medicine ball throws, weighted rope pulls, and working on the rowing machine and Airdyne bike.

Defending world champion and newly-minted world record holder Li Bingjie has been seeing vast improvements in these areas, according to a report from Chinese media.

“After this period of training, my cardiorespiratory ability and lactic acid tolerance have improved,” said Li (via translation), who is coming off of breaking the world record in the women’s 400 free (SCM) in October.

“This time not only the speed is much faster than the last time, but blood lactic acid is still a little lower than last time, and the training during this period has achieved (positive) results.”

At the Chinese Swimming Championships (SCM) in late October, Li rocketed to a time of 3:51.30 in the women’s 400 freestyle, shattering the world record of 3:53.92 previously held by Australian Ariarne Titmus.

Li said that she felt the benefits of the new training regime at those championships, and has continued to push her aerobic base in the lead-up to the SC World Championships.

“(At) this competition I have a lot of events, and I need enough (the) aerobic foundation for support. The training during this period has improved compared with the training before the (domestic) competition.

“I hope to break through my personal best results at the Short Course World Championships, impacting (the) 800 meters and 1500 meters freestyle world record.”

In the 1500 free, Li would need to drop more than 30 seconds to challenge Ledecky’s record.

Ledecky, Titmus and Canadian Summer McIntosh (who went 3:52.80 in the 400 free just days after Li’s world record swim) won’t be in attendance in Melbourne, and now Italian Simona Quadarella has withdrawn.

With a relatively open field, it could very well be Li vs the clock in the women’s 400, 800 and 1500 free in Melbourne, while in the 200 free she’ll face off with world record holder Siobhan Haughey.

My apologies to this young lady and her teammates for calling them cheaters. It was definitely an initial reaction to one of my favs not being the one to break it – but this is absolutely no excuse for xenophobia and I take full responsibility and hope others will realize these swimmers are doing everything they can to step out of the shadows of past mistakes. I do look forward to seeing her swim more and I also look forward to Summer McIntosh eventually taking the WR from her 🙂

Thinking now, the 400 FR WR will change hands quite a few times before Paris 2024.

China will be doing whatever it can behind the scene to benefit the results in their advantage.

did china start to give money to the officials yet like they do in diving?

When The Grass Is Cut The Snakes Will Show

I think she’ll take down the 800 record, especially if she’s in the same form from Nationals. I don’t see the 1500 record being touched though.

Any chance Lin Zhang will resurface?