LEN Names Popovici and Meilutyte As Swimmers Of The European Championships 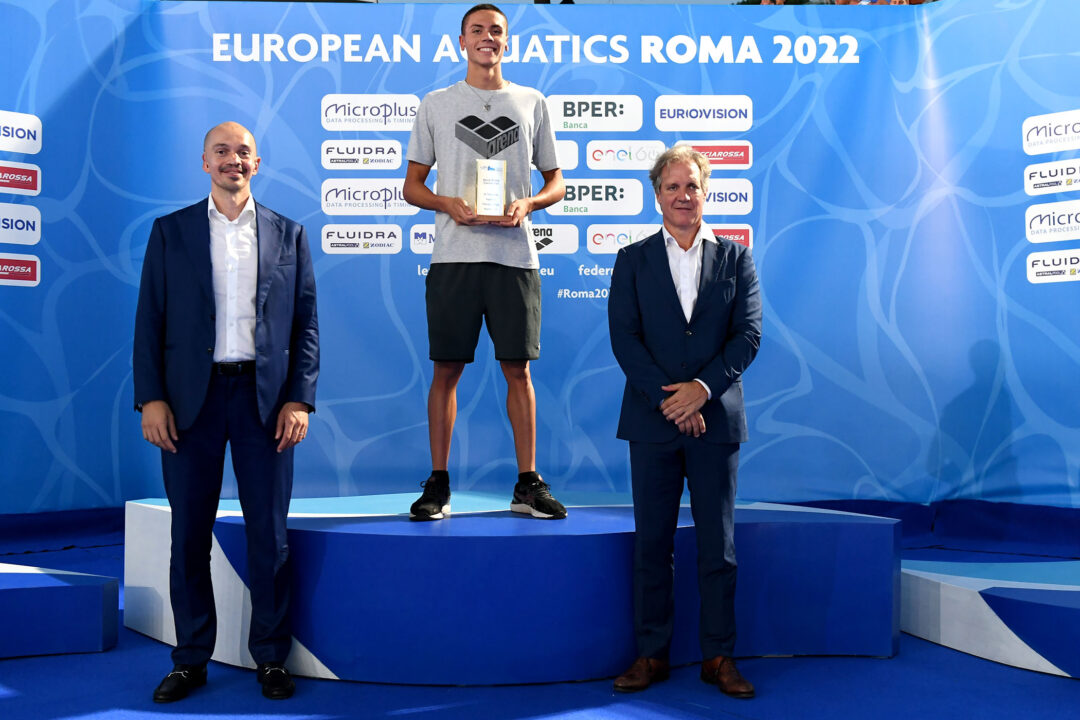 LEN decided on the swimmers of the meet based on which male and female had the performances earning the most FINA points for their respective gender. Current photo via Fabio Cetti

Following the conclusion of the 2022 European Championships, LEN, the official governing body of European Aquatics, announced its choices for the top male and female swimmers of the meet. Romania’s David Popovici was named the male swimmer of the meet, while Lithuania’s Ruta Meilutyte won the women’s award. These decisions were made based on which swimmer had the performance that earned the highest number of FINA points.

Popovici got the award based on his 100 free world record, which earned 1003 FINA points. The 17-year-old had a show-stopping meet, putting up incredible performances in both the 100 and 200 freestyle. In the 100 free, he dominated through all three rounds, setting a championship record in the prelims (47.20), a European record in semi-finals (46.98), and then finally breaking Cesar Cielo’s thirteen-year-old super suited world record in a time of 46.86 in the finals. He wasn’t done after that though, as he later went on to go 1:42.96 in the 200 free, which was a world junior record, the fastest performance (and the only textile performance under the 1:43 barrier) in a textile suit, and also made him the third-fastest performer in history behind Michael Phelps and Paul Biedermann.

The next two highest-rated performances for men were Mykhailo Romanchuk‘s 1500 free, which was a Ukrainian record, and Thomas Ceccon‘s win in the 100 back.

Meilutyte’s 50 breast semi-final was the highest scoring swim on the women’s side, earning 985 FINA points. Her time of 29.44 was a personal best time, the fourth-fastest performance in the history of the event, and just 0.14 seconds off the world record. She later went on to win the 50 breast final in 29.59. Her other medal from Euros came in the 100 breast, where she put up a 1:06.50 to take bronze. Euros was the second major international meet for her this summer, as she previously won 50 breast gold and 100 breast bronze at the 2022 World Championships in June.

After Meilutytte retired from competitive swimming in 2019, she came out of retirement in December 2021 and has been training ever since.

The second and third-highest rated female performances of the meet were also in 50-meter long events. Sarah Sjostrom‘s 50 free time of 23.91 earned 970 points, and is also the fastest time in the world this year—beating out her World Championships winning time of 23.98. Analia Pigree took 0.02 seconds off her French national record at this meet, clocking a 27.27 50 back to win the event and earn 968 FINA points for her time.

In addition to individual awards, Italy took home the team trophy for the first time in the competition’s history. They won 35 total medals (13 golds, 13 silvers, nine bronzes), which was the most out of any country. Italy had over twice as much hardware as Hungary, who was second on the medal table with 15 medals overall and 5 golds.

Those points doesnt seem a good way to give the awards…