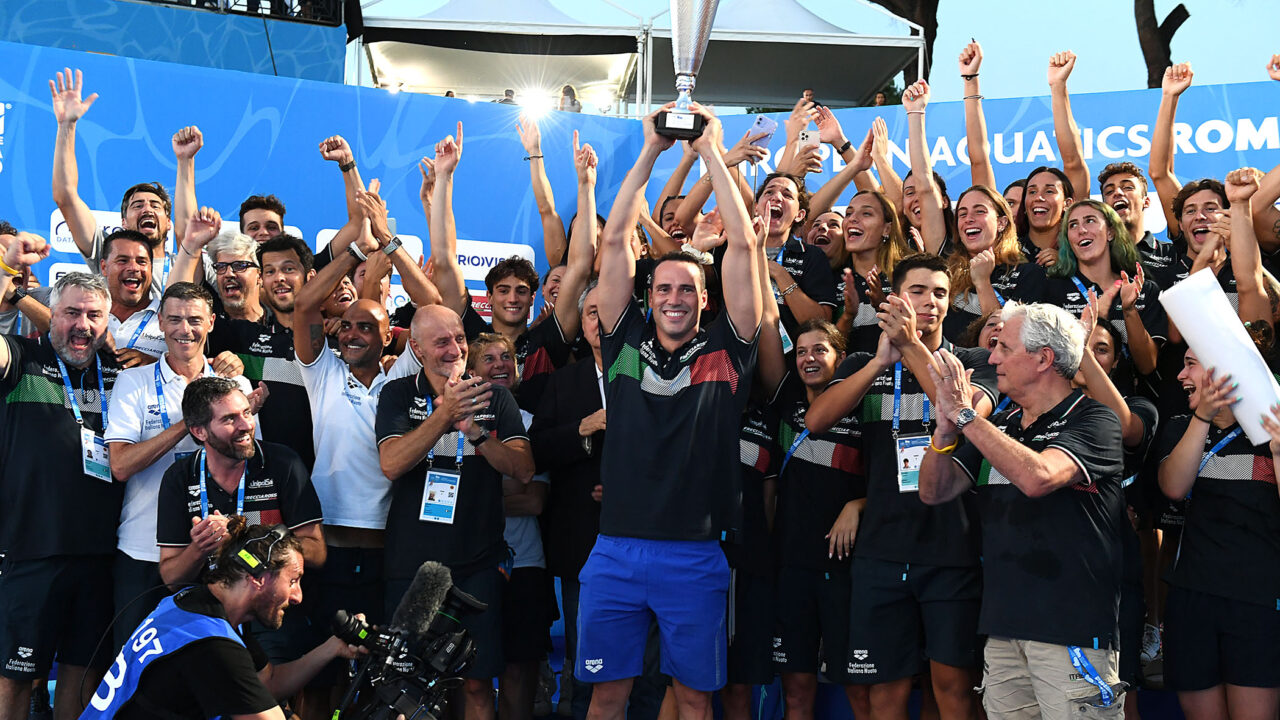 The 2022 European Championships wrapped up tonight from Rome, Italy but not before the host nation sealed its spot atop the overall swimming medal table. Current photo via Fabio Cetti

For the first time ever, Italy has won the European Championships medal table, amassing a total of 35 pieces of hardware. The nation’s women claimed 13 medals while the men grabbed 20, with 13 golds falling into Italy’s combined total.

That was more than double the number of combined gold of runners-up Hungary, who claimed 15 total medals, including 5 gold. Great Britain rounded out the top 3 with 15 medals as well, but just 4 golds, while the Netherlands and Sweden comprised the rest of the top 5 nations.

For comparison, with Russia having been among the nations competing at last year’s European Championships, Italy snagged 27 medals in all, which included 5 golds, 9 silvers and 13 bronze. That ranked the nation 3rd.

The final push from Italy at this year’s edition of the European Championships came from Leonardo Deplano snagging silver in the men’s 50m free while Benedetta Pilato also claimed silver in the women’s 50m breaststroke final. Reigning World Record holder Thomas Ceccon topped the men’s 100m back podium as Ilaria Cusinato brought home the bronze in the women’s 200m fly.

Along with Alberto Razzetti‘s silver in the men’s 200m IM, Simona Quadarella secured silver in the women’s 400m free. Finally, the Italian men’s 400m medley relay finished the evening off in style, with the combination of Ceccon, Nicolo Martinenghi, Matteo Rivolta and Alessandro Miressi getting it done for gold.

Of note, although France finished out of the top 5 in 6th place overall, its haul of 13 medals (3 gold, 7 silver and 3 bronze) represents the nation’s best output since the 2010 super team days of Fred Bousquet, Alain Bernard, Yannick Agnel, Sebastian Rouault, and Camille Lacourt, among others.

Maybe the Italians won just because lots of potential participants decided to avoid travelling to Rome, which is the dirtiest city in the world, in one of the most backwards countries in the whole world.

Maybe, just maybe, you got your butt hurt.

Envy is a declaration of inferiority

Very impressed with the Italians, they are strong in the men’s. Strong in distance freestyle & very strong in Backstroke & Breaststroke 100s

“For the first time ever, Italy has won the European Championships medal table, amassing a total of 35 pieces of hardware. The nation’s women claimed 13 medals while the men grabbed 20, with 13 golds falling into Italy’s combined total”.

While the usual “qualifiers”, ie post Olympic year/absentees and mucked around racing calendar have validity; its indisputable that the ITA men’s team are on a major upward trajectory and may, currently, be the 2nd strongest overall “unit” behind USA.

They have always produced outstanding individual performers but we are now seeing far greater depth and breadth as evidenced by all 3 relays medalling at Worlds; not just at Euros.

The women are still primarily reliant on a small number of outstanding individuals but there did appear to be signs of some increasing depth in certain events.

It’s been cool to see them just get better and better every year. It took me a while, but randomly noticing, “huh, they have like…a pile of guys that’ll be 47 mid in the 4fr, that’ll be pretty good!” to “oh they won the medley at world’s by just being the best team, loogit that.”

How do you know where they’ll be 900 years from now?

Austinpoolboy is from the future

Maybe Dressel will be back then? 😉

Clearly they’re going to be in Paris again to mark the 900th anniversary of the 2024 Paris Olympics. Like I think that’s pretty obvious.

Italians were very deep, much more so than in previous years.