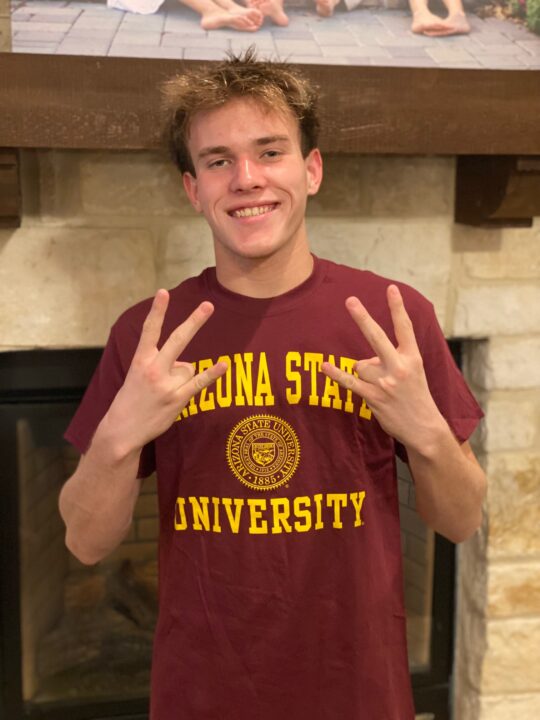 Stallworth is among the program's first commitments as it begins rebuilding its diving program. ASU has no divers on the roster this season.

Following his brother, currently a swimmer on the Arizona State team, Lane Stallworth has committed to join the program’s diving team in the fall of 2022. Originally from San Antonio, Texas, Stallworth is in his senior year at Clark High School.

“I am very excited to announce my verbal commitment to Arizona State University!!! Thank you to my family, friends, coaches, and teammates who helped me get here. So excited to be a sun devil!!! FORKS UP😈🔱”

Diving for his club, Alamo Area Aquatics Diving, Stallworth finished in second on platform (14 and up) at the 2021 Houston Holiday Hoedown. At that same meet he also claimed 14th on the 1-meter and 11th on the 3-meter in the 16-18 age group. Competing in high school, Stallworth made it to the State Championship meet during his junior season. At that meet, he finished in 12th, scoring a total of 396.35.

Stallworth’s club team is among the state of Texas’ most storied programs, with the team being led by former National Team coach Stan Randall. Throughout his career, he has coached the U.S. National Team at competitions in seven different countries, coached North American champions, and been named the Diving Age Group Coach of the Year multiple times.

Arizona State’s freshman class of 2022 will be the first group of divers after the team’s former coach and all of it’s team members departed the program during the 2020-21 season. While the team’s former coach and divers claimed that the program was being cut, a new coach since hired and new divers will begin arriving on campus next fall. The team will now be led by Marc Briggs, who has served as the program’s volunteer assistant for the past 11 seasons.

Lane Stallworth finished 2nd at the Texas 6A state championship this past March. Each year he has gotten better and better. The sky is the limit for this talented diver.

I have known both the old and the new diving coaches at ASU for a number of years and look forward to seeing the new team and am certain Marc Briggs will do well as a coach.