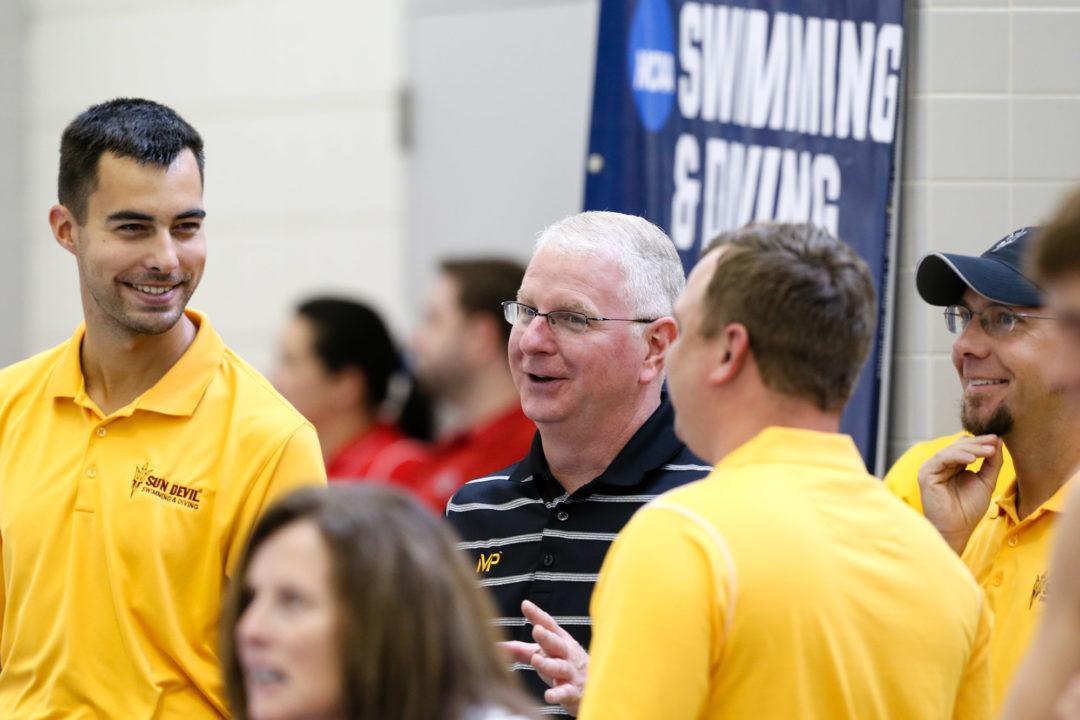 Longtime head diving coach Mark Bradshaw, who left the program in April, said the school informed athletes it "will not be supporting diving this year." Archive photo via Tim Binning/TheSwimPictures.com

Arizona State University is discontinuing its diving program, multiple sources tell SwimSwam. Additionally, a formerly committed diver posted on Instagram that the program is “indefinitely terminated,” and former coach Mark Bradshaw says current divers were told the school “will not be supporting diving this year.”

Isabelle Lombardi, who dives with Arizona State’s club team, Sun Devil Divers, will now go to the University of Hawaii instead.

A few weeks ago I found out that the diving program at ASU had been indefinitely terminated. I didn’t know what this change meant for my future in college athletics. I was worried with it being so late in the recruiting process that all spots would be filled already and I wouldn’t be able to find a good program/school to dive at. I am beyond excited to announce that I have found my new home and will be diving for University of Hawai’i at Mānoa. Thank you to @sundevildivers for preparing me for everything to come, and to my family for helping me through this change. I can’t wait! Go Bows🤙🏽 #gobows

Frida Kaellgren – ASU’s only 2019-20 diver slated to return next season – is currently in the transfer portal, and Bradshaw announced he was leaving after 23 seasons in Tempe in April. In an e-mail to SwimSwam at the time of his departure, Bradshaw indicated he was not retiring from coaching, just from his position at ASU.

Bradshaw was the CSCAA Diving Coach of the Year in 2003 and 2005 and was named to the Team USA coaching staff for the 2013 FINA World Championships.

The school, however, told SwimSwam that the program is not being cut and that it intends to hire a new head coach “as soon as [it] can after things return to normal.” According to public records, on 2019, Bradshaw’s salary was $82,782 while head coach Bob Bowman‘s was $250,000, and associate head coach Rachel Stratton-Mills made $84,000.

While the swimming side of the Sun Devils’ swim and dive program has been making progress since Bowman took over in 2015, ASU’s only swim and dive national titles in the last 20 years came from one of Bradshaw’s divers, Finnish Olympian Joona Puhaka. The four-time NCAA champion won the NCAA title in the 1m in 2003, the 3m in 2004, and both the 1m and the 3m in 2005.

Only one diver, senior Youssef Selim (an Olympian for Egypt), competed for Arizona State across both the men’s and women’s 2020 Pac-12 Championships. He placed second on the 1-meter board, fourth on platform and eighth on the 1-meter board. In 2019, he won both the 1-meter and platform, becoming the first Pac-12 men’s diver since 2015 to take home championships in two events in a single year. Selim has one year of school left and is training for the Tokyo Olympics.

Mara Aiacoboae won the Pac-12 women’s championship in platform dive in 2017 and 2018, while only Kaellgren competed for ASU on the women’s side last season.

An awful lot of people – primarily those advocating for getting rid of the diving program – must have short memories. Flash back – 2007 when ASU announced they’d be cutting swimming but keeping the diving program. Remember that? It was about the same time Clemson announced the dropping of the swimming program too. If I recall correctly, the CSCAA blew a gasket and threw an ad hoc committee together to ensure this did not become a trend. Don’t see any committees out there trying to help diving. Last I recall, CSCAA is supposed to stand for college swimming and diving coaches association of America?

In short, be careful what you wish for, you just might get it!

As someone who has closely followed the ASU Swimming and the diving program for over 20 years, I am sorry to hear of this cut.

Awful lot of assumption going on. How about we wait and see how it all plays out.

Let me get this straight. Stratton-Mills, an assistant, makes more than a 2 time NCAA coach if the year and National Team coach? Maybe that’s why Bradshaw let? Guess i all missed that the first time around

Rachel has been a national team coach as well. Don’t forget that she helped a high schooler make an Olympic team.

But in the NCAA’s, which is where ASU is, he was a 2 time Coach of the Year.

ASU has such a long tradition of great divers under coach Bradshaw…. plain sad to see that Bowman is willing to throw all that away only because of a couple off seasons. Which in reality is only one off season, ASU had 4 All-American divers (3 women and one man) in 2018. When on the women’s swimming side they only had one. Sad, very sad.

I think….there were a number of divers this season who are very good divers but were removed by Bowman from the team for disciplinary reasons. That may explain the diving “off season” this year. Correct me if Im wrong

Is he the catalyst? Perfect circumstances to begin the separation/removal of diving from Swimming and Diving?

Dropping diving is irresponsible from every angle. Like it or not, it is a swimming and diving program from the NCAA perspective. ASU fluffs their feathers as one of the top this and top that whenever the school does something of note. This, if true, is awful. The PAC 9, 10, 11, 12 or whatever it is this year should inter-vein.

Dropping diving is responsible from many angles. 1. It frees up more scholarship for the swimmers, 2. Reduces the need to support a diving coach, 3. Reduces equipment costs 4. Helps team unity 5. Speeds up meets 6. Reduces liability – Why keep diving?? I applaud ASU for leading and paving the pathway to getting rid of a worthless part of sport.

Careful, this is a similar argument used to drop Swimming & Diving programs 1) Saves scholarship cost to university 2) Reduces the need to pay coaches 3) Saves facility cost of a pool 4) N/A 5) Streamlines resources and AD responsibilities 6) Reduces liability. Its hard for me to believe a swimmer would applaud the dropping of another sport and disrespect the athletes who bust their butts to represent their school.

It hard for me to believe “COACH” would disrespect another persons opinion. If some swimming and diving programs need to be culled in order to strengthen our sport I am all for that. Swimming is clearly endangered – we should wake up and see that reality. Coach Bowman is an innovator, genius, forward thinker and the DUDE!!!!!

If the sport is “Swimming and Diving” why hasn’t a diving coach been named Head of a program? A head swim coach has way too much power over a diving coach, especially when it is a dead end job. A swim coach can fire a great diving coach simply for sticking up for his squad and not being a team player on the swim side. The pay is crap and the diving coach can never move up until things change.

The 4th of my 5 head coaches my first 18 months of being a college swimmer was a diving coach who was a Olympic medalist. It was easily the worst experience of the 5, she hired an assistant who hadn’t been involved in swimming for years because they got along well, and had no idea how to bring a program together or run practices. The first 3 weeks of the season every practice consisted solely of 1000-2000 yards of drills, it was akin to summer swim camp swimming.

The biggest issue with putting the diving coach at the top of the program is that the quantity of work is linear for the amount of athletes that you’re working with, so… Read more »

May I ask what school you went to? That’s like say a distance coach should never be head coach because that’s what? 2-events? A head coach is a manger and a fundraiser as a well as a coach. I’m sorry you had a bad experience but I’m also not sure you can call an interim hc a truly vested head coach.

Calling her an interim coach is funny, as she was the first full time swimming or diving coach the school had ever hired. She had been the diving coach the previous year underneath coach 3, he left because he was told it would never be a full time position, and they immediately promoted her as the full time coach.

Her time as head coach only lasted 3 weeks of practices because she died.

I think my reply got deleted because it was pithy, which was a fair moderation choice. I’ll leave it at, she was not an interim coach, she was hired full time permanently over the previous summer, and there was a non-sporting related reason for which she was unable to continue on as the head coach of the team.

You’re right. We should just call it swimming.

Coach Bowman obviously knows what he is doing. A remarkably devoted and genius coach. He is possibly on the cutting edge of swimming programs to add to the swimming program by reducing diving. This trend may continue. Regardless of whether one is supportive or diving or not, diving at times takes away from swimming and will go by the way side eventually. Smart move Coach B and ASU!

Make sure you call Eddie and let him know he’s messing up.

Called him – He agrees, regretfully, with my premise.