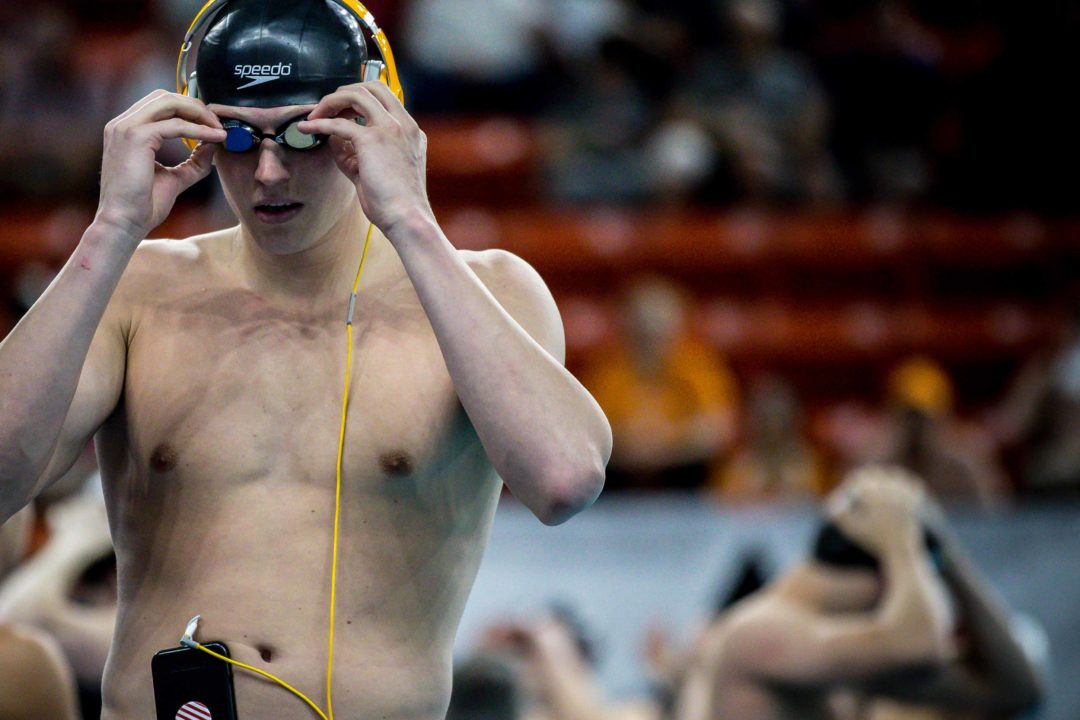 There are no scratches out of the circle seeds on day 3 prelims of the 2019 Men's NCAA Championships, but a couple of bigger names have scratched out of secondary or tertiary events. Current photo via Jack Spitser/Spitser Photography

There are no scratches out of the circle seeds on day 3 prelims of the 2019 Men’s NCAA Championships, but a couple of bigger names have scratched – some to focus on a different day 3 event or relay.

#26 Fynn Minuth of South Carolina has scratched the 200 free. He’s the highest seed to scratch out this morning. He also scratched this event last year, resting up for a 200 fly where he took 13th. He comes in as the 13-seed in the 200 fly this year as well. That race is tomorrow morning.

28th-seeded 400 IMer James Guest of Georgia is the other top 30 seed to scratch. He’s actually a lower seed in the 100 breast (38th), but did drop two tenths to finish 18th in that event last year at NCAAs.

Tennessee’s Kyle Decoursey is one of the more notable names to scratch. Decoursey is better-known as a 50/100 freestyler, but finished 18th in the 50 free at Thursday’s prelims. He’ll likely load up for this morning’s 200 medley relay and tomorrow’s 100 freestyle/400 free relay combo, scratching out of his tertiary individual event, the 100 fly.

Only one relay scratched out of today’s 200 medley: Kentucky, which was seeded 27th of 28 teams.

All scratches from Friday’s prelims session, including seeds:

My 2 cents: Texas is expected to make a move in the 200FR. I think that move and an unexpected move in the 100BK makes this a true points race again- with Diving once again an accelerator for TX. Big day here – I hope CAL took my advice and gorged themselves on Franklins BBQ last night – with Rudy’s breakfast tacos this morning…

Good strategic move by Coach K! DeCoursey is our sprint star and having a rough meet. He was seeded 4th in the 50 and did not qualify. With him not swimming the 100 Fly will give him a more realistic chance to score a few points in the 100 Free and perform better on relays. Every point counts for our team race. Hey swimmers do not let the MAN Vols divers score more points than the MAN Vols swimmers in this meet!!! Show some of that Big Orange Coonskin Cap PRIDE! Go MAN Vols swimmers!!!!!!