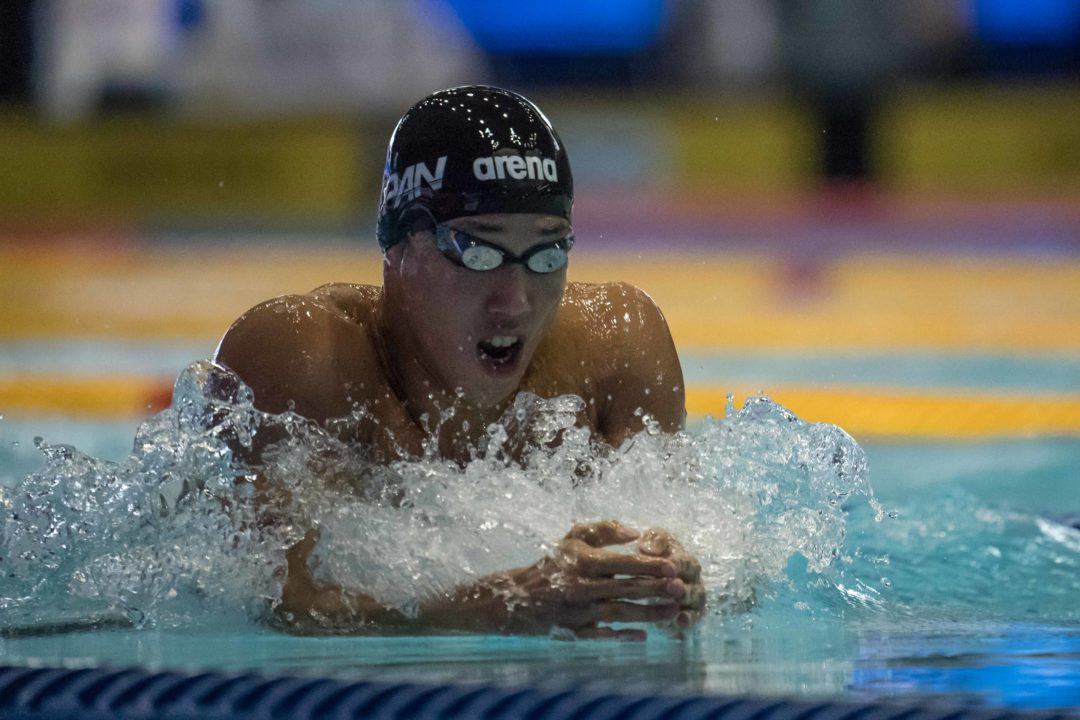 In another blow to the host nation of the 2020 Olympic Games, 27-year-old Hiromasa Fujimori of Japan has reportedly tested positive for a prohibited substance. Archive photo via Mike Lewis/Ola Vista Photography

In another blow to the host nation of the 2020 Olympic Games, 27-year-old Hiromasa Fujimori of Japan has tested positive for a prohibited substance. (Manichi)

Per a statement by the Japanese Swimming Federation, Fujimori tested positive for methylephedrine as a banned substance in urine during the 2018 Short Course World Championships. A testing of his B sample rendered the same results. (YomiuriShimbun)

“I am very surprised and shocked.”

It’s almost a certainty that Fujimori will be out of the all-important Japanese Championships that take place next month. As the primary qualifying meet for this summer’s World Championships, we would then not see Fujimori in Gwangju.

Fujimori finished in 4th place in the 200m IM at the Rio Olympics, behind winner Michael Phelps, runner-up Kosuke Hagino of his native Japan, and bronze medalist Wang Shun of China.

In Hangzhou, Fujimori took bronze in the SCM 200m IM, finishing in a a time of 1:52.73 to shut Aussie Mitch Larkin out of the medals by just .05 seconds. If this positive doping result holds, Fujimori would be stripped of this result, leaving Larkin with the bronze.

Japan is already dealing with another doping scandal in the form of Junya Koga, the backstroking ace who is facing a possible 4-year ban.

In May of last year, as we reported, on the eve of the 2018 Japan Open, the 31-year-old backstroke ace reportedly failed two drug tests in the month of March, which resulted in his being removed from the Japanese National Team. Koga tested positive for traces of ‘banned muscle-building substances’, which the Olympian denied having taken knowingly.

Koga is appealing his case to the Court Arbitration of Sport (CAS).

We have seen two recent cases of ‘false positives’ to the tune of American Madiyson Cox and Dutch racer Kira Toussaint. In Cox’s case, her positive test was found to have been traced back to her multi-vitamins, a substance she had documented on every doping control form she had ever completed.

For Toussaint, the Olympian had tested positive for Tulobuterol with a reading of 0.000000001 grams found. After re-testing of the samples at the same Beijing laboratory, the earlier results of tulobuterol in those samples were found incorrect and FINA withdrew its case.

Not surprised. Japan is an extremely proud nation and 2020 is of huge importance to them – I fully expected a few more failed tests than usual in Japan in the run-up to Tokyo.

Indeed, this seems not uncommon coming up to a ‘home’ games, the host nation has an unusually high number of positives across sports. Obviously the pressure is enormous.

methylepihedrine byproduct derived of the ephedra(mahuang) herbal plant. is found in cough syrup prevalently sell over the counter in Japan. He probably ingested the banned substance unknowingly ! Anyway, kudos to the testing lab in China being is one the highest standard globally and probably the same standard will implement in Tokyo. (Two positive resulted detected from swimmers participated world short swimming championship Hangzhou 2018)

Interesting. Seems like the social media farms/bots are getting into SwimSwam.

If China had high standards, they would have done something about Sun Yang destroying vials instead of inventing excuses about the nurses paperwork. If he had nothing to hide he would not have destroyed the vials.

recognized the name from another comment, so I just went and pulled this from a recent article regarding Sun Yang’s dedicating his Chinese nationals victory to Kenneth To: https://swimswam.com/sun-yang-dedicates-chinese-nats-vitory-to-friend-kenneth-to/#comment-672666

Certainly possible that this is some kind of social media “troll farm” type of thing.

Fina had deliberated and cross-examined the ‘fracas’ of Sun Yang based actual facts all parties involved and conclusively found that he did no wrong – no yellow card needed- End of story. The rest of story of hammer and broken vial is good for national enquirer’ readers.

It’s conduct detrimental to the sport. You can understand why breaking a blood vial makes you look guilty?

Riiiggghhhtttt. Hiromasa Fujimori took cough syrup. Sun Yang broke vials and it was only later announced – by Chinese officials – that the nurse didn’t have the proper paperwork. You really expect anyone to believe that?

If there was nothing to hide, Sun Yang would not have broken the vials, proper paperwork or not.

If there was nothing to hide, Sun Yang would have done subsequent drug tests to prove his innocence. FINA is complicit b/c they did not demand a drug test on the spot. Especially considering

Sun Yang has a history of doping violations. He’s still cheating and China is helping him cover up.

I don’t have a crystal ball, and I wasn’t there when the Sun Yang vial smashing incident happened.

But I can’t fully agree with the assertion that “if he had nothing to hide, Sun Yang would not have broken the vials, proper paperwork or not.”

If I’m Sun Yang, or better yet if I’m Sun Yang’s mother who has lived in China her entire life, if someone with improper paperwork shows up and takes vials of my sons blood…well I would probably get super paranoid as well. All of those fears that we’re subjected to by our politicians about how the government is secretly out to get us all…that kind of thing actually has happened in communist China.

As much as I’m suspicious, both yours or my versions could be true.

But that’s why why there’s enforcement agencies, random testing and the like. We don’t and shouldn’t trust athletes.

The better question is why China’s testing/oversight agency(s) AND fina’s did not immediately follow-up with a formal re-test, correct paperwork and all. Sun Yang should not have been cleared until that was done.

If he was innocent as the Chinese claim, I’d want a test immediately by an independent body to resolve any appearance of impropriety.

I can agree with that. They should’ve immediately sent a verified tester, maybe even a supervisor of some sort, to conduct another test.

All WADA labs should be independent from home countries. Anybody could take the samples in a hand luggage to anywhere and the tests can be made there. I think it would be simple and clear.

What about death of 17 years old Qing Wenyi who died suddenly in the middle of the night a month after winning two national titles.
Have Chinese labs and medical doctors figured out what has happened?

Yozhik steppin up! There is hope for you yet.

😀 are you familiar with the theory of relativity? Maybe it is you who finally stepped up in understanding the beauty and deepness of Yozhik’s thoughts.
Damn this relativity, always confuses us. 😀

Even an autopsy done on Dale Oen (ex-world champion aged 26 ) sudden death found to be inconclusive after high altitude training stint in US.
Kenneth To apparently aged 26 sudden death also training stint in US so do we were to ‘insinuate that something amiss ! (for instance non US swimmers not acclimatised to US ‘drinking water’ that initially M Cox purported for being doping positive!

You missed my point. I’m not talking about the cause of the death. I’m talking about failure to detect it by Chinese authorities and medical professionals. So may they not that excellent as you are trying to convince us.

As I said under an article about Kenneth To, in Asian culture people are unwilling to damage one’s body after his death. This can prevent doctors from doing thorough check and figuring out the reason.
And there is no evidence that sudden death plus national titles equals doping. I’m sure To and Dale Oen have more titles than the little girl you mention.

Is it also the custom in Asian culture to cremate their dead within 48 hours. And what are the state regulations if a criminal activity can be suspected?
I’m not an Asian and don’t have answers on these questions. Please, enlighten us.
This girl wasn’t somebody unknown from the street. She was under permanent control of professional doctors and if her dearth appeared to be a surprise to them then following western traditions I would expect some investigation to be perform. It is strange to me that this decision was left up to parents who have not seen their daughter for the most time of her short life. She actually belonged to state and the rushing cremation I… Read more »

Does the state have priority over a national team athlete’s family to decide on important personal issues of him in the west? I didn’t know that. For me It’s more natural to let her family decide what to to after their daughter’s death, even if their daughter is a national team member. It’s more strange to me if the state requires a compulsory investigation after her family refused it. I don’t see anything odd in the girl’s case you mentioned. Although I’m also curious about the cause of the death, just like in To’s case, their family’s decision is totally understandable.

Whatever you say. I’m not in the position to argue.

Did a quick google to figure out what this substance does, and found that it is one of the main substances of interest when testing chess players (Chess WADA).

Anyway, this story isn’t too surprising. The chance to represent at a home Olympics is a huge motivator, and that motivation is going to push some people to pursue some less-than-legit avenues of improvement. Particularly with the current medal outlook (Phelps retired, Lochte serving a ban, Hagino unmotivated)– it’s wide open after Kalisz right now*. It’d be hard not to take advantage of the opportunity to medal in front of a home crowd.

*with the obvious caveat that a lot can happen… Read more »

Get those cheaters out of the sport

This is at least the third doping case from Japan swimming in the past two years. There was also a college student swimmer who was tested positive last January. I don’t know what’s going on with them. Japan used to have a very clean history and a good reputation for clean sports.