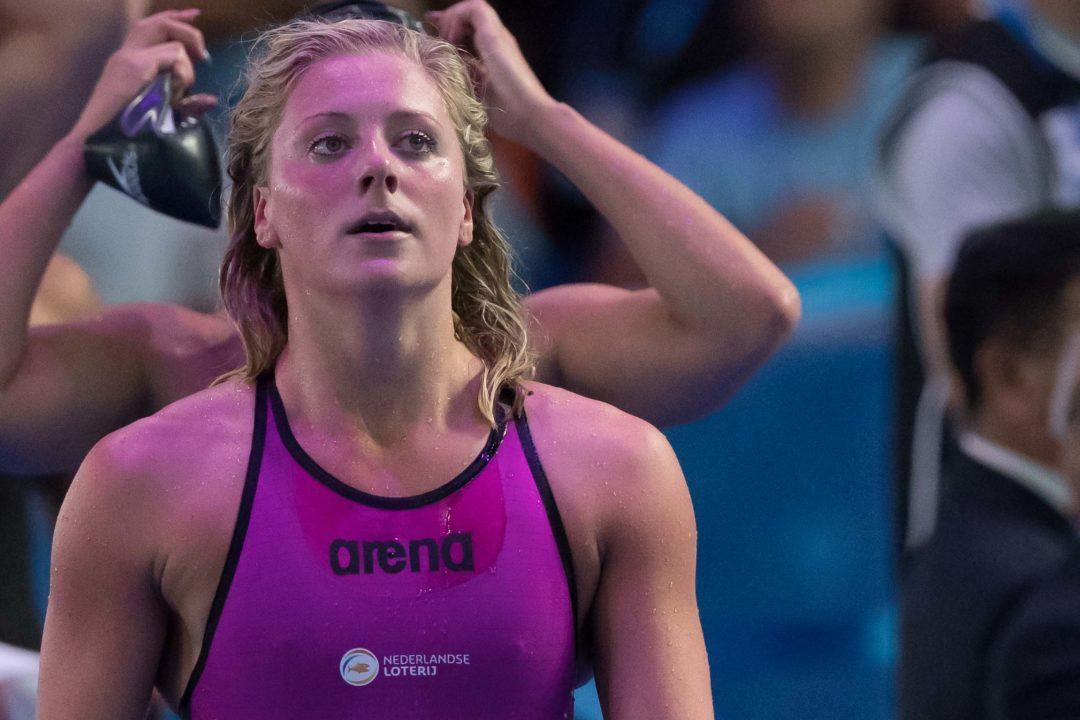 "Today, I like to share my story with you, because I am innocent and I am convinced that the truth will prevail," says Kira Toussaint, world-class backstroker of Netherlands who tested positive for a banned substance on the eve of this year's Short Course World Championships. Archive photo via Mike Lewis/Ola Vista Photography

Top elite backstroker Kira Toussaint of Netherlands abruptly pulled out of the just-concluded Short Course World Championships citing illness. When her withdrawal was announced on December 7th, the Royal Dutch Federation (KNZB) stated, “The backstroke specialist is ill and will therefore not start.”

“Today, I like to share my story with you, because I am innocent and I am convinced that the truth will prevail,” reads Toussaint’s statement.

“On the 7th of December 2018, just before the start of the World Swimming Championships in Hangzhou (China) I was notified by FINA that I tested positive for the substance: Tulobuterol.

“The urine sample was collected during a doping test on the 2nd of November 2018 during the World Cup Swimming in Beijing.  Tulobuterol is a substance that has a prolonged bronchodilator effect. The medicine can be administered using an inhaler or using a patch applied to the skin, or like clenbuterol, for example via contaminated food.

“I am an asthma patient and to treat my asthmatic condition I use another medication. The medication I use is allowed and has the same effect as Tulobuterol. Reportedly Tulobuterol is not available in Europe. It is predominantly available in seven countries in Asia, including China.

“It is completely unknown to me how this substance has entered my body. I strongly believe in a clean sport and I support anti-doping measures for 100%. Never in my life have I been in contact with doping or have I used doping. I have always been very outspoken against the use of doping. I can honestly say that I never took this substance knowingly.

“Because the notification of the positive test coincided with the start of the WC, it was decided that I would not start. That same night (December 7th, 2018), I was on a plane back to the Netherlands. I was devastated. It was so unreal, I cried and cried during my flight home. It felt so unjust. I lived up to this tournament for the last couple of months. I was in the form of my life, yet I was going home. Through the media, the Royal Dutch Swimming Federation has communicated that I was going home ‘sick’.

“I also find it terrible that I could not honestly tell why I could not participate in the WC. The past few weeks have been a nightmare for me. Especially while the WC were still taking place. It was fortunate that I am surrounded by family and friends that have supported me tremendously.

“I also did experience great support from the Royal Dutch Swimming Federation, they even sent me flowers.

“At present we are working hard to investigate how the substance could have entered my body. Because I know that I did not take any illegal substance, I have full confidence that in the end everything will be all right.”

Jan Kossen, KNZB General Director responded to the news, ” It is terrible what happened to Kira: the message, the necessary withdrawal of the World Cup and the great uncertainty in which she finds herself. We know Kira as a hard-working, honest athlete. We wish her a lot of strength in the coming time. ”

With Toussaint’s positive test having come on November 2nd, that means she competed at the remainder of the Beijing stop, the Tokyo stop and the Singapore stop of the World Cup Series, earning money at each post-positive. Depending on the outcome of her case, she may wind up relinquishing earnings, but that’s yet to be determined. Overall, Toussaint finished the entire series as the 8th highest female earner with $42,150.

Of note, as with FINA, the International Swim League (ISL) has zero tolerance for doping.

https://swimswam.com/fina-withdraws-doping-case-against-kira-toussaint/
The lab made a mistake…

I’m curious…I’ve always heard if an athlete does not have asthma, using a bronchodilator has relatively no performance gains. True or not? Medical professionals chime in please.

You are correct. British Medical Journal has published a research paper on this. They tested a bronchodilator on normal athletes and it did nothing for their endurance. Keep in mind too that a person’s performance is limited by their cardiovascular system not their pulmonary/lung system in a person that has no lung disease.

She might very well be telling the truth. Especially if her tests come back and the amounts of the substance are well below therapeutic levels. It is possible it is contamination. I hope that SwimSwam follows up on the story.

I mean, if someone were going to. Real the rules, would they do it with a substance like this? Not something that makes a massive difference like testosterone? This is an American… Read more »

Sorry last paragraph messed up. “I mean, if someone were going to cheat, why do it with a substance like this? Why not something that has a massive performance enhancing effect, like testosterone or growth hormone?”

I believe Kira’s version 100% as well as I believed Cox. It would be very stupid to take a forbidden bronchodilator on purpose. Imagine how hard is the situation for her, she is in the best moment of her career and the world suddenly falls apart because of an accidentally contaminated food. And a lot of people hating her with no reason… She will be able to demonstrate she is innocent, I hope there’s no suspension.

Tulobuterol (INN) is a long-acting beta2-adrenergic receptor agonist, marketed in Japan as a transdermal patch under the name Hokunalin tape (ホクナリンテープ).[1]

Currently, it is only legal in 7 countries: Japan, Germany, China, South Korea, Bangladesh, Pakistan, and Venezuela. It is available in India also.

Not sure how the indoor pool conditions affect breathing issues (asthma diagnosis?) but it seemed a much larger number of swimmers had issues needing inhalers between two club teams my swimmer was at with indoor swimming having alot more.

It is kind of self selective as kids with asthma are encouraged to swim. But I also believe indoor pools could exacerbate asthma.

Nobody will know the facts of the case until investigations are completed, but I’ll chime in with my two cents. Kira’s use of legal medication to treat asthma has been long established, so I am inclined to believe these mistakes can happen, but I’ll say what I always say to athletes – If you have ANY doubt, even 0.01%, DO NOT touch it. Personally, I wouldn’t touch a product that wasn’t governed by European standard laboratories/EU regulation, so if this a Chinese product it’s at very least a sloppy mistake,