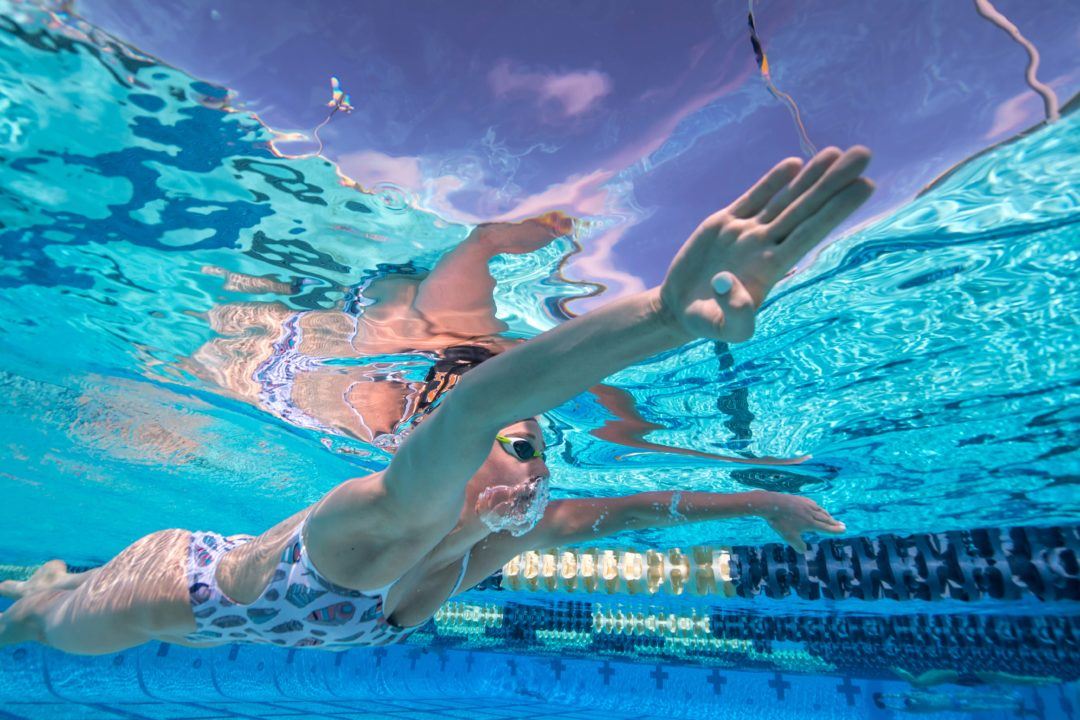 The Court of Arbitration for Sport approved a reduction of Madisyn Cox's suspension from two years to six months after her multivitamin tested positive for Trimetazidine.

The Court of Arbitration for Sport has approved an agreement reducing 2017-2018 USA National Team swimmer Madisyn Cox’s 2-year doping suspension to six months after she was able to establish what had triggered the positive test for Trimetazidine, Cox informed SwimSwam today.  As the initial suspension began March 3rd of this year, she will be eligible for competition next week, on September 3rd.

According to the Cox’s statement and the text of CAS’s consent award, confirming the agreement between Cox and FINA, a WADA-accredited lab in Salt Lake City determined that 4 nanograms of the banned substance were present in both the opened and sealed bottles of Cooper Complete Elite Athletic multivitamin that Cox says she has been taking for seven years, and that she had listed on every doping control form she’s ever had to fill out.

The positive test came in February, 2018, and the FINA doping panel initially gave Cox a 2-year suspension. They cited that, while they found her testimony credible and believed that she did not knowingly ingest the substance, they could not reduce the suspension any further than  2 years without any concrete explanation as to how the Trimetazidine entered her system.

At that time, Cox could only suppose that she had ingested trace amounts of Trimetazidine through drinking tap water in home of Austin, Texas.

In the statement she sent to SwimSwam today, Cox said “I did not immediately test the multivitamin as part of my FINA case because there had never been a recorded case of Trimetazidine supplement contamination in the United States. I mistakenly assumed that the supplement I was taking was extremely safe.”

The last six months have been a grave and harrowing learning experience that I would not wish on any honest, clean, elite athlete. I know that any supplement – even a multivitamin purported to contain only those ingredients specified on the label and purchased at a local supermarket – can be suspect.

I would advise any athlete who chooses to take supplements to not only consult resources such as USADA’s Supplement 411, but to also make sure that they are third party batch tested to check for any contamination.

I am excited to return to the pool. I also appreciate the support so many people have shown me throughout this trying ordeal.

We asked Cox about any pending legal action against the manufacturer of the supplement, to which she said “we are currently taking everything one step at a time. Finalizing this case has been a burden on me for a while. However, after all is said and done we will move on to consider that step.

It was in the multivitamin. They had theorized it was the water since Cox had been taking the multivitamin for years and they trusted it and thus they had no idea where it came from.

So glad to see some justice and vindication for Madisyn Cox!

It was a tough lesson to learn. You can’t trust anyone.

Hopefully other swimmers will learn from this. As soon as you reach senior nationals/ NCAA championship level, you should test everything.

Of course it will be in “multivitamins”

Not only an opened bottle but more importantly a sealed unopened new bottle with each tablet containing 4 ng tested by a WADA accredited lab. No possible way it was contaminated anywhere but in the manufacturing. Science is nationality neutral. It’s irrefutable. While 4 ng is almost incomprehensible I believe someone above did the math on what it would take to be deemed therapeutic. 1.5 billion tablets is obviously an impossibility! Take a Chemistry class or two!

This is bad for the Cooper Institute. In the training world, this is a highly credited Institute with many programs sending their trainers to go here annually. When I was in the service, many of us competed and worked hard to go here.

Glad Cox was able to clear this up. Black eye on Cooper.

On a slight tangent, would it make some sense to just not take an extra multivitamin? I know you will find a thousand conflicting opinions, but I don’t think there is any conclusive evidence of benefit or need. For normal people there’s no real downside (except cost) but here we see an example of a landmine.

It’s a shame that an athlete can prove more or less conclusively that the drug was present in a legal supplement that she unknowingly ingested, yet she still has a six month ban. The rules need to be changed.

No, the rules shouldn’t be changed because it would open a huge loophole.

“When I see the 200m podium I want to be sick. I prefer to remember the crowd that cheered when we went out.” hopefully don’t let me see this drug cheat on the podium…Madisyn Cox, she pisses purple…

“I used the word ‘drug cheat’ because she tested positive, I just have a problem with her testing positive and still competing.”

IMHO, it is the coach’s responsibility for the elite athletes because the athlete in that case is really the golden instrument or golden goose through which the coach will get his/her success. You do not let someone you don’t know take care of your golden instrument or golden goose. Again, not talking about your athletes next door, talking about world class athletes. The coach of an elite athlete or team will presumably have a nutritionist on staff who can do the actual leg work.