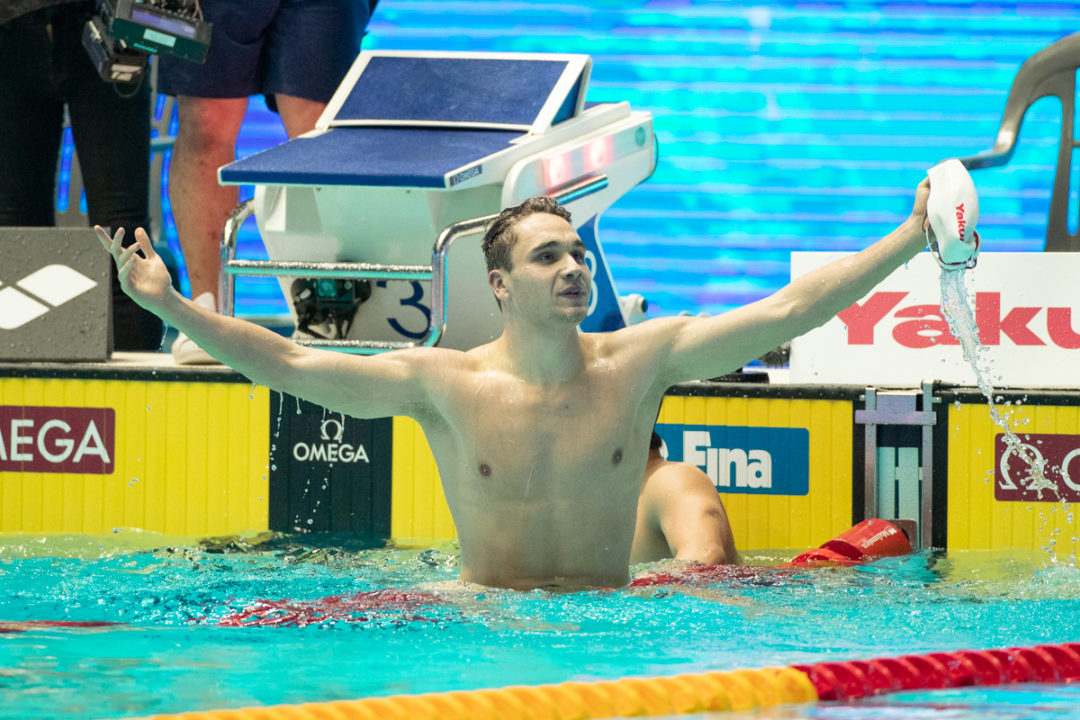 Kristof Milak is somewhat fed up with training for the 200 fly and will put the event on the back-burner over the next few months. Archive photo via “Rafael/Domeyko Photography”

Coming off of his earth-shattering world record performance in the 200 butterfly at the World Championships back in July, Hungarian Kristof Milak has settled back into training to gear up for the 2020 Olympics in Tokyo.

However, despite becoming the fastest man in history by nearly eight-tenths of a second in the event, the 19-year-old is putting the 200 fly on the back-burner for the next few months.

“In the fall months, I don’t even want to strain on the Olympics, I want to have fun in the competitions and I want to prepare for other (distances) and other (strokes),” he said, translated from his native Hungarian, with Newzeti Sport.

He continues in saying he wants to focus more on speed work right now, “rather than constantly pushing that ‘crazy’ 200 butterfly … I’ve done enough.”

After a follow-up question asking if he hates training for one of the most gruelling events in swimming, Milak replied “no, I just don’t feel like swimming (it) for a while. I’m a little fed up with it and I don’t feel the need to practice this (swim) in the coming weeks or months.”

In the interview, he also discusses his position as the gold medal favorite in the event next year, how he’s dealt with the media attention he’s received since the World Championships, and his potential event lineup next summer.

Check out the full interview, in Hungarian, here.

Smart man, he can run 200 free and 100 fly training for a while, when you’re 3 seconds ahead of the world you deserve a change of pace

I’m no mathematician but 200 free training + 100 fly training = a decent 200 fly. Either way smart decision he could push Hungary’s 800 free relay into the final.

I was about to come on here and say the same thing… he can afford to swim slower in the 200 Fly and still win the gold next summer by a decent amount… if he wants to win silver in the 100 Fly (he can focus on that all he wants… he will not beat Dressel) or possibly win a wide open 200 Free then focusing on those events would be the smart move, especially monetarily.

I can only imagine Phelps trying to say that with Bowman..

He wouldn’t because the response would be, “Fine, let’s work on your 400 IM.”

I am pretty sure it wasn’t all 2 fly….he swam IMs, back, free races too! Plus eventually Michael and Bowman did butt heads on many things as is well documented

Well, he did take a year off of the 200m butterfly in 2005 to try out other events. He actually contended the 400m freestyle that year (didn’t make the final, but he competed in the heats).

I’d argue that what made Phelps great was the fact that he didn’t exclusively focus on the 200 fly. He totally could have stuck with butterfly after breaking the WR at 15, and he would have still been a legend. What helped him transcend and become the GOAT was the fact that he then brought his other events up to the same level. I don’t necessarily think Milak will do that, but I’m happy to see him trying to be more than just a flyer.

Lol ya but let’s not forget that Phelps almost broke the world record in both the 100 and 200 back, missed the world record in the 100 free (behind Eamon Sullivan, regardless) in Beijing leading off the relay..and made the national team in the 200 breast (also going I think 1:01 or 1:02 in the 100?) ..Phelps was legit the bomb, and could swim anything, anytime..he was absolutely the most dominant swimmer, ever, and I don’t see anyone coming close anytime soon

50 free and mike were his kryptonite

Phelps had a legit 1500 as a teenager. Only swam it a few times, but he still has a top-5 age group time.

I think Dressel showed at SEC/NCAAs the other year that he can be just as dominant. I would argue that his breast is comparable to Phelp’s back and that Dressel’s 50 is comparable to Phelp’s 4IM. Maybe Dressel isn’t more dominant… I wont argue that point, but to say no one is close is what I am arguing (because you kind of have to concede that one).

No one cares about SCY dominance. There are tons of Ian Finnerty’s, David Nolan’s, and the like who have been dominant NCAA swimmers and not close to dominant LCM. Dressel is clearly dominant in the 100 fly and 50 free. He barely wins in the 100 free. That’s it. To compare Dressel’s SCY breast (his best 100 LCM is what, 1:01?) to Phelps’ elite level LCM backstroke is a joke.

I care about SCY dominance, because I think that NCAAs are more fun to watch and follow than the Olympics. 🤷‍♂️

You earn that right when you swim a 1:50.7 🙂 Real talk though this is kind of what expected. You got to think that he was disappointed in his 100 fly, especially after blowing the worlds mind and also probably succeeding his own expectations in the 200. You have to gain a new level of confidence after destroying a legends world record, and it must of been upsetting to then lose the 100 fly be over a second. I believe he thinks if he puts his attention make on the 100 fly he could beat Dressel, while stile be able to muster up a 200 fly time fast enough to win comfortably. Remember last time he took he attention off… Read more »