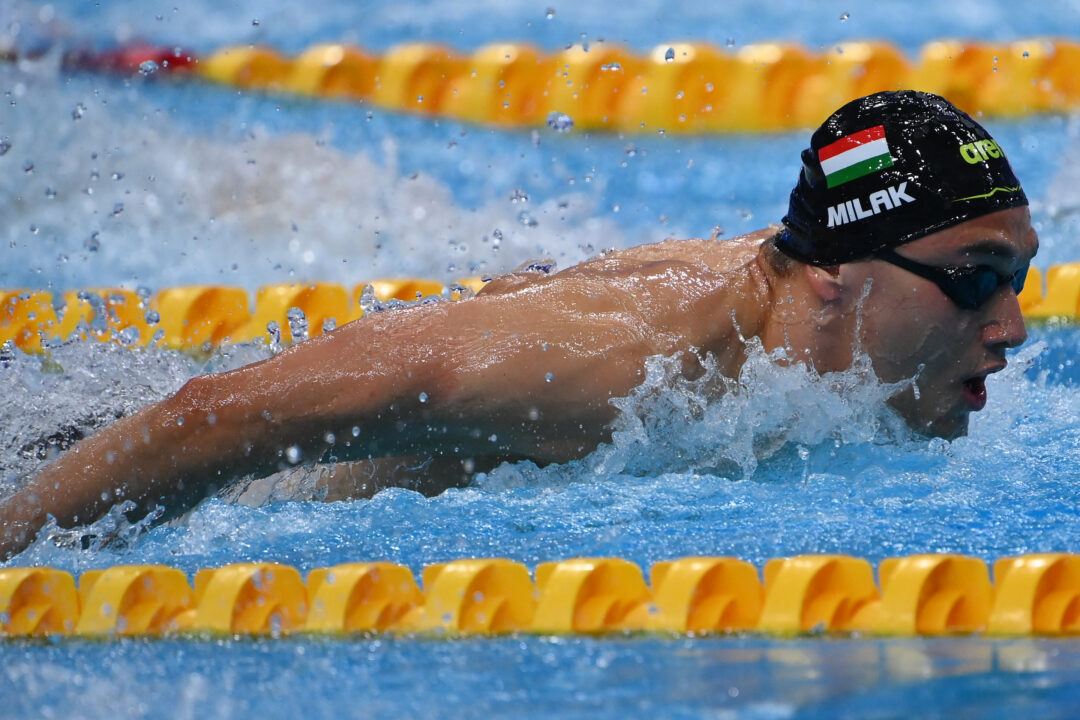 In finals tonight, Milak got out to a faster start than he did in semifinals, and came home faster than he did when he swam his previous best. Stock photo via Alfredo Falcone - LaPresse

Hungarian superstar Kristof Milak broke the Hungarian Record again in the men’s 100 fly, winning the race with a 50.18. Milak entered the meet with a personal best of 50.47, which he had swum last month. In prelims of the 100 fly, Milak tied the Championship Record of 50.64. He then came back for semifinals, shaving 0.02 seconds off his prelims swim, and taking sole ownership of the CR. His 50.18 from finals marked a lifetime best by 0.29 seconds.

Here is a split comparison between Milak’s 3 performances from these Championships, as well as his previous best of 50.47:

In reality Milak is the second fastest in history in 100m butterfly as I estimate that during their prime (without the aid of the supersuits or semi-supersuits) Cavic was around 50,80 sec and Phelps was around 50,30 sec. Furthermore I do believe that Milak is able to challenge the 50 sec barrier in Tokyo and even break Cavic’s european record. Having said that any time below 49,80 sec is probably out of Milak’s reach.

Off the top of the head, does anyone know what Cavic’s best time was outside of 08-09?

51.81 from London 2012 or something lol. The suit massively helped Cavic to not die on the last 50. Without it, he may never have contended with Phelps.

I could find 5 textile Cavic times under 52.

In fairness, I think he had some injury problems post-2009, but that’s not a very long list of times under 52…

You have to remember, Phelps had to race several events leading up to the 100 fly. Had he just focused on say fly/free, then I’m sure we would have seen him take the 100 fly record much further.

Sub 50 to medal in Tokyo? Glad to see this event getting so much faster in recent years.

Who’s your third pick to dip under 50? Minakov? Miladinov? Don’t see it tbh.

I’d like to see a comparison of this swim to Dressel. No doubt Dressel’s start, turn, underwaters and finish are better. As to speed in the middle of the pool I’d say it’s close and possibe even that Milak is faster? Also, just throwing this out there, if this was 2009 and Milak was super-suited he would be faster than Phelps.

Final time for today’s final in the first table says 50.62 and not 50.18
And it also lists Milak as from USA in the top 5 performers chart

Well, if he is close to dressel after first 50 he can try to run over

I think people are forgetting that outside of Pan-Pacs in 2018, Dressel has only been slower than 50.08 once at a major international meet in the 100 fly (I’m pretty sure prelims in Gwangju and that’s it). He also massively improved his 100 fly in SCM so while Milak’s swim is incredible and he can most likely go 49, Dressel is still well ahead of the rest of the world

Hell, he was still 50.5 at 2018 Nats after missing training due to his motorcycle accident.

Can’t wait for the sub