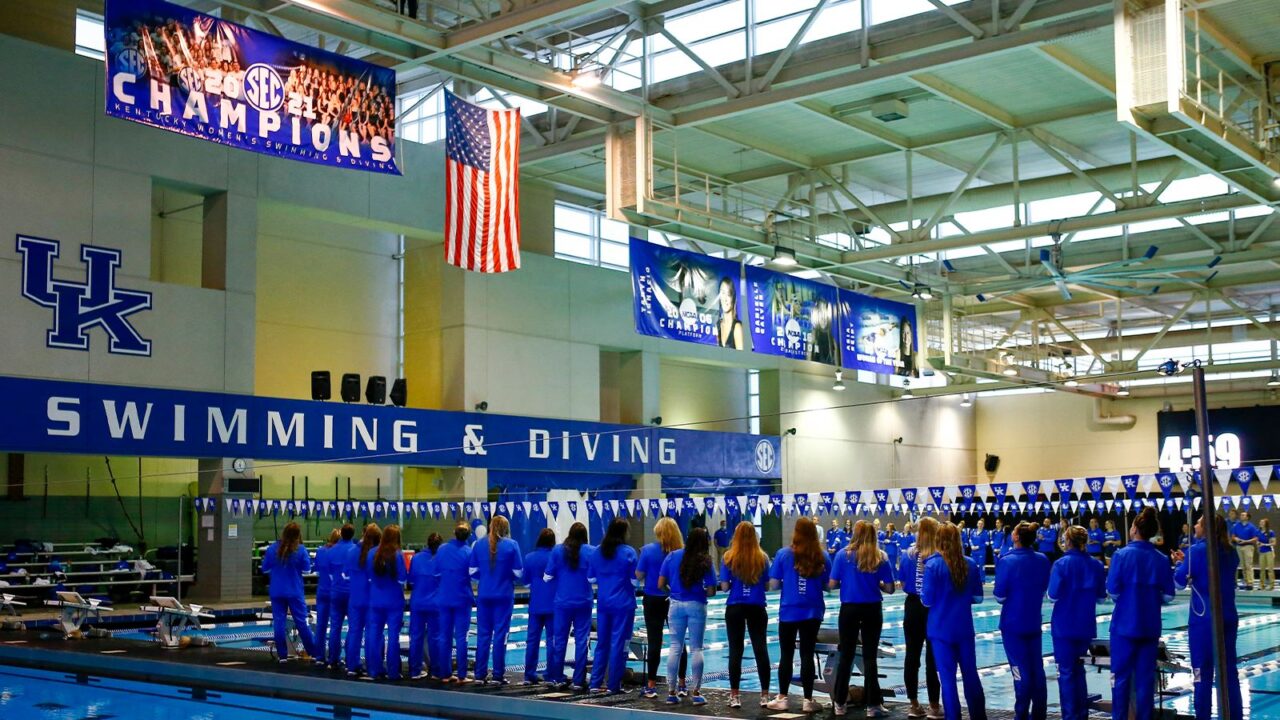 Kentucky recognized their SEC Championship from last spring before hosting Ohio for a women-only dual meet at the Lancaster Aquatic Center. Archive photo via Kentucky Athletics

University of Kentucky vs. Ohio University Dual Meet (Women Only)

On the same day that the University of Kentucky recognized their 2021 Southeastern Conference championship team, the school welcomed Ohio University to the Lancaster Aquatic Center for a women’s only dual meet. Prior to the meet, the school raised its 2021 championship banner and handed out rings to the women who were a part of that team.

“The energy at the pool tonight was great, and it was wonderful to have so many alumni come back and support us as we celebrated our 2021 SEC championship,” said head coach Lars Jorgensen. “Ohio is a well-coached team who swam great, and I’m thankful they came down and competed against us.”

Ohio University’s head coach Mason Norman was the associate head coach at Kentucky before taking the reigns in Athens.

The meet was the season-opener for Ohio, while Kentucky moves to 2-1 with wins over Indiana State and Ohio, anda  loss to Indiana.

The Wildcat women started the meet off strong, taking the top 4 spots in the 400 medley relay. Coming in first was the team of Lauren Poole, Bridget Engel, Izzy Gati, and Megan Drumm, who combined for a time of 3:45.49.

After helping the Kentucky team to a win in the 400 medley relay to star the meet, Izzy Gati picked up the first of her two individual wins in the 200 free. Gati was the only athlete in the 200 to dip below 1:50, touching in a time of 1:49.67. Later in the meet, she picked up another event win when she touched first in the 500 free in a time of 4:56.64. Gati was a finalist in both the 100 and 200 butterflies at last year’s NCAA Championships, with her top finish being 9th in the 100 fly.

Claiming Ohio’s first event win of the meet was Gabrielle Brust in the 100 back. Only a sophomore, Brust finished with the top time in the event by nearly a second, touching in 56.19. Brust was a B-finalist in the event at the 2021 Mid-American Swimming and Diving Championships.

The 100 breast featured a tight race between sophomore Bridget Engel and freshman Olivia Mendenhall, both from Kentucky. Engel came away with the win in the event, touching in 1:03.77 to Mendenhall’s 1:04.03. Engel picked up a second event win in the 200 breast (2:18.25) later in the meet.

Sweeping the sprint freestyle events was Kaitlynn Wheeler, a Kentucky junior. In the 50 free, she stopped the clock in 23.58, while in the 100, she finished in 51.30.

Caitlin Brooks picked up the win in the 200 back, leading Kentucky teammate Leah Luckett by over two seconds. Brooks finished in 2:00.31, while Luckett’s time was 2:02.91.

On the diving board, it was Kentucky senior Kyndal Knight who swept the 1 and 3-meter competitions. On the 1-meter, she posted the top score of 299.10 over teammate Morgan Southall. Southall took second on the 3-meter as well, with Knight scoring 361.50 points.

Kentucky elected to exhibition their swimmers during the final three events of the day: the 100 fly, 400 IM, and 200 free relay.

Kentucky’s Lauren Poole touched first in the 400 IM in 4:17.52, but Ohio’s Morgan Croaning and Gabby McKee officially tied for the win with matching times of 4:36.52.