Katinka Hosszu Not Entered In 400 IM At European Championships 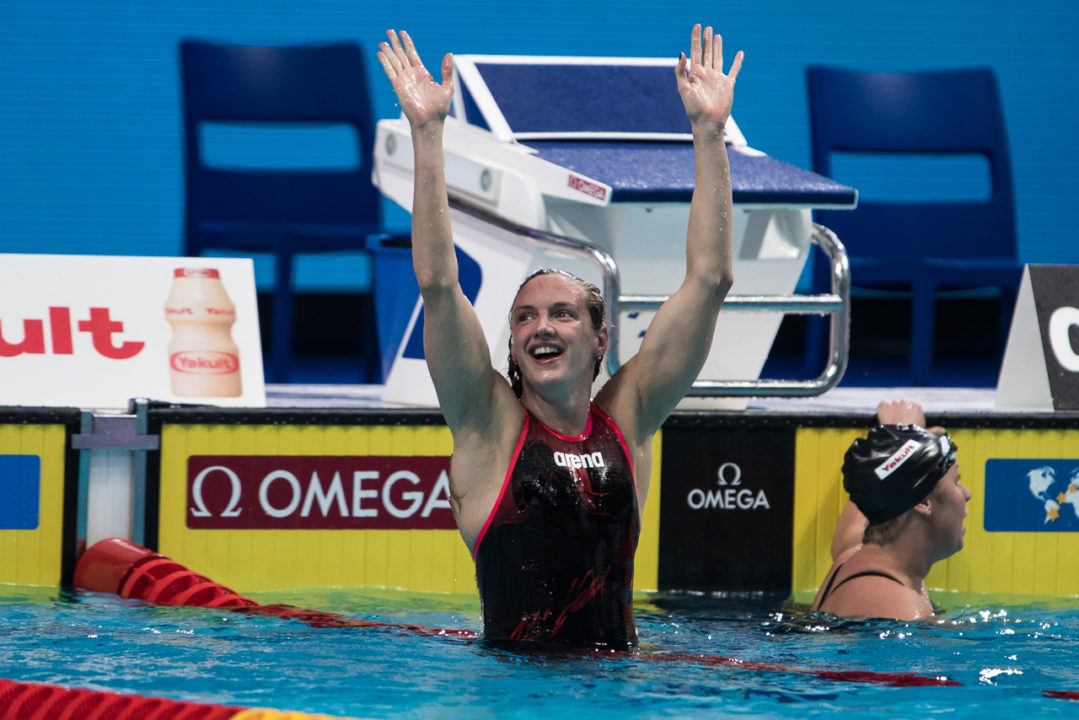 Katinka Hosszu will not defend her European title in the women's 400 IM. Archive photo via Peter Sukenik/www.petersukenik.com

Reigning Olympic, World and European champion Katinka Hosszu has not entered the 400 IM at the upcoming European Championships in Glasgow, instead opting to swim the 100 and 200 back and 200 IM.

Hosszu has had a difficult year, breaking from long-time husband and coach Shane Tusup publicly in May. This has likely had a profound effect on her training, and perhaps hasn’t put in the work where she feels she can swim a 400 IM up to the standards she wants. This season she ranks 11th in the world – 6th amongst Europeans – with a time of 4:38.32 from the Mare Nostrum stop in Barcelona.

While it remains to be seen what kind of form she’ll be on in Glasgow, the 29-year-old will still have a great shot at gold medals in her three entries. In the 200 IM, she’ll go to battle once again with Great Britain’s Siobhan-Marie O’Connor, who won silver behind Hosszu in Rio. O’Connor is the only European swimmer faster than Hosszu this year (2:09.80 to Hosszu’s 2:10.06).

In the backstroke events, while entering as the top seed in both by virtue of her swims last summer, she’s only ranked 48th and 54th in the world for the 2017-18 season.

With Hosszu out, 18-year-old Italian Ilaria Cusinato will probably be the favorite in the 400 IM, coming in with the top seed at 4:34.65. She did that time less than a month ago at the Sette Colli Trophy in Rome. The race for the medals shapes up to be between her and the British duo of Aimee Willmott and Hannah Miley.

I think that nobody will deny that Hosszu-Tusup union had positive effect on Hosszu’s performance.
If people don’t give any credits for Tusup’s coaching talent then what was that that converted Hosszu from just a good swimmer to the world record holder and Olympic champion. She made this sudden progress at the age when majority of elite swimmers are beginning thinking about retirement.
The only thing I can think of that Shane Tusup’s effect is bringing some structure, strong goal orientation and a lot of pressure not leaving any room for laziness. He probably was a little like an Army sergeant, or made her training like navy seals surviving exercises. Would I like to have such a spouse?… Read more »

If Tussup offered his coaching services to females swimmers in their early 20s do you think anyone would agree to be coached by him? It seems like if he really had some magic training methods that could bring those results he would be the most sought after coach in the world. So likely it was a perfect storm of highly motivated swimmer who just needed the extra push to make it to the top and Shane gave her that push….that or the Hungarian tap water

Same as probably you , I don’t believe in miracles. If for the most of her swimming career at the best possible age, being coached by knowledgeable coaching staff in an excellent environment she didn’t make much. And then after switching to somebody who had no coaching experience at all she almost immediately begins super perform then something was done/changed.
Their business was strong motivation that didn’t existed before. Probably that factor kept them together and gave an excuse to him of being harsh and for her to obey.
I don’t know what’s happened there and actually don’t want to. But I have serious doubts that she will be at competitive level in Tokyo. Because of her age… Read more »

Let’s not dress it up we all know what went on.

Maybe he’s tipped off the testers as to what to look out for now that she’s slept with one of the other swimmers. Hopefully they fall out big time over money and the secret to her success gets told in full…

Well, whatever went on there, it’ll certainly always be one of swimming’s biggest stories. I’m guessing it’s on its down cycle, too.