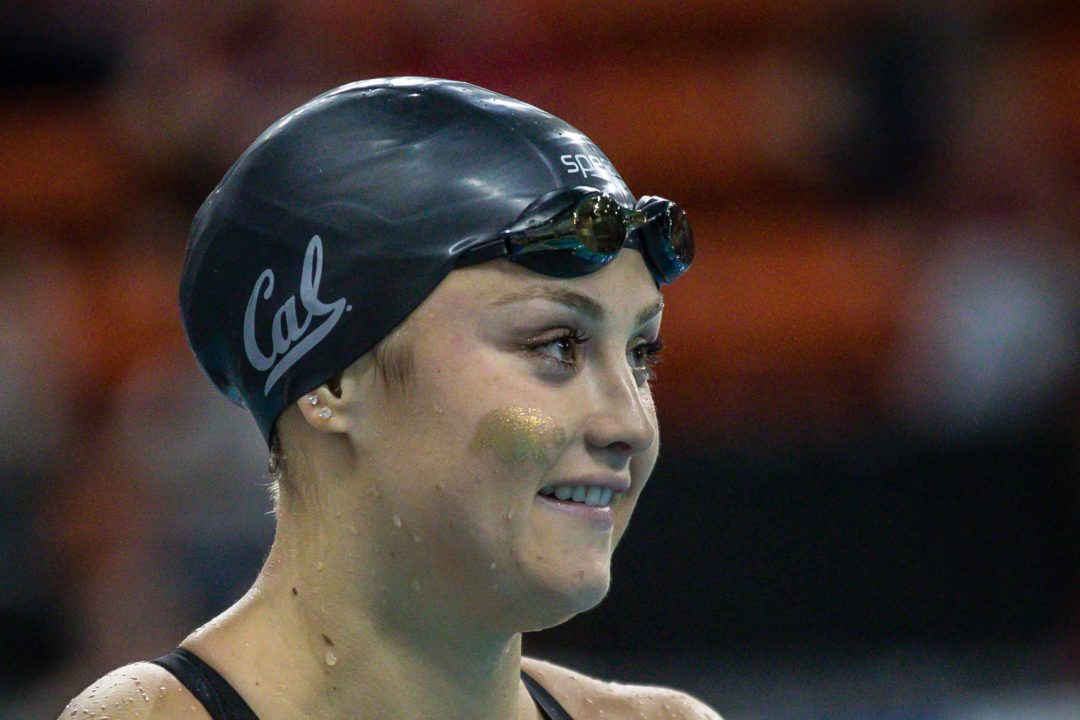 Katie McLaughlin produced the second-fastest swim of her career in both the 100 fly and 100 free tonight in Santa Clara. Archive photo via Jack Spitser/Spitser Photography

After putting together an impressive preliminary swim in the women’s 100 fly this morning, Cal’s Katie McLaughlin was even faster tonight to win the event going away at day 2 finals of the Santa Clara International meet.

The 21-year-old McLaughlin also had a near-lifetime best swim in the 100 free, where she finished in the runner-up position to teammate Abbey Weitzeil. Weitzeil won in 54.05, a new season-best, and McLaughlin was a tenth back in 54.15, just off her best of 54.14 from last summer’s Pan Pacs.

Simone Manuel was the top seed out of the prelims in 53.30, a time which was a new season-best and put her seventh in the world, but she scratched out of the final. The same went for Katie Drabot, who had put up the #2 time in the 100 fly this morning in 59.82.

One of the Alto Swim Club athletes who did stick around for finals was Abrahm DeVine, who had an impressive double in the men’s 100 free and 100 fly.

No disrespect to those swimming, but what happened to this meet? I remember when I was swimming, this was always a big time competition.

Congratulations Katie! Your persistence and hard work is showing!

Anyone know why Simone, Katie, and Brooke didn’t swim tonight?

I believe it is currently Finals week at Stanford.

That would be a ridiculously late finals week – most high schools are out by now, much less colleges

Stanford, like many schools (mostly private, colleges across the country, and many public and private colleges in California), is on a quarters system. That often results in an academic schedule that doesn’t align closely with the rest of the country. Finals for the spring quarter run from June 10th-14th. UCLA’s, for example, are June 8th-14th. Dartmouth was May 31-June 3, and next year will be June 5th-8th. Depaul in Chicago is June 10th-14th. These are just a few ‘for examples.’

that would have been easy to Google…