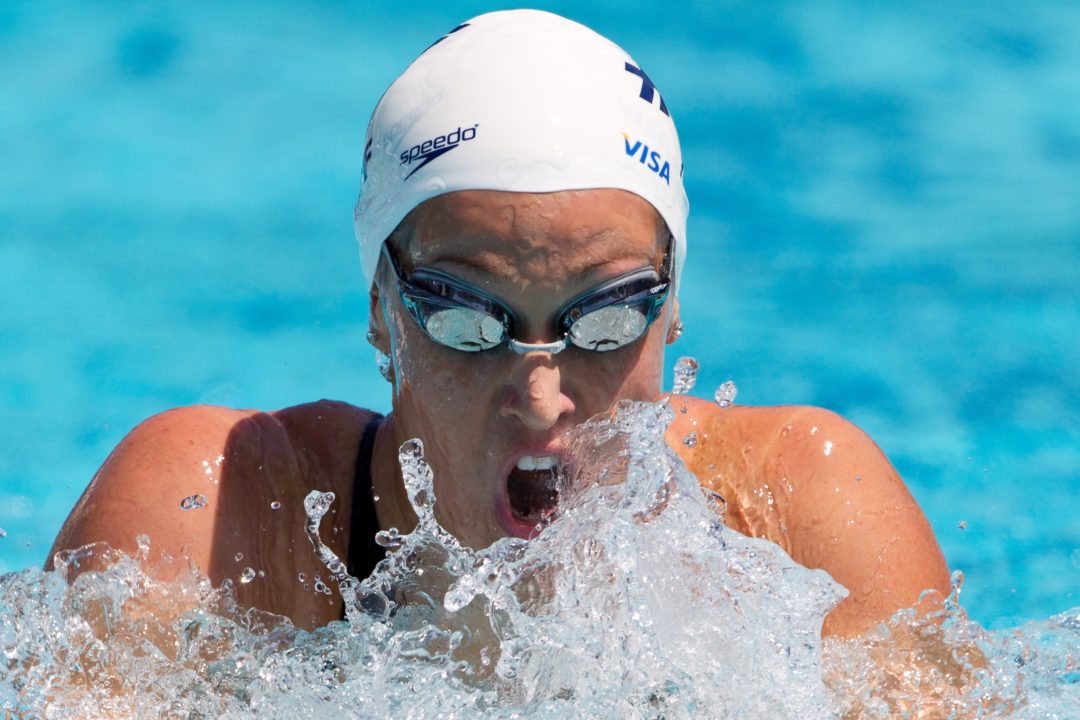 The multi-time world champ and Olympic medalist swam just her second meet since Trials in 2012, winning three events and getting close to her lifetime-bests in all three. Archive photo via Tim Binning/TheSwimPictures.com

Hoff’s most notable time is her 1:44.16 (short-course yards) win in the 200 free Saturday morning that’s almost two seconds faster than she was in November, and only a second or so off of her lifetime-best in the event from all the way back in 2007.

Representing Hurricane Aquatics, Hoff also competed in the 200 IM on Sunday morning, going 1:55.91 that was a good three-second improvement on her November meet. Then at the end of the session she put up a 54.45 in the 100 back, which is actually a lifetime-best in an event Hoff hasn’t swum much in her professional career.

Hoff’s return to competition still appears to be in its very early stages, at least judging by her very limited meet schedule over the past few months. But these times would suggest she’s still in quite good shape, and even getting closer to where the multiple-time Olympic medalist and world champ was before taking her extended break post-2012 Trials.

Full results of the Gulliver Last Chance Meet are available on Meet Mobile.

Cool. Cool. Cool. Cool.
As a big Hoff fan, I was disappointed to not see her in Orlando.
But I’m happy to read she continues to improve a lot since her return.
1.44 in the 200 free and 1.55 in the 200 IM are times which start to be really serious.
Her first summer goal should be to qualify in the US 4X200 free relay team for Kazan 2015. And why not a surprise in the 200 IM as well?
I want the US dream team in 2016 in the 4X200 free relay with Missy Franklin, Katie Ledecky, Katie Hoff and Allison Schmitt. It doesn’t seem so crazy now.

I also want to see that 4×2 free dream team Bobo. That would be AWESOME!!!

Vote Up00Vote Down Reply
The Beach

I want to see a dream 800 free relay of Franklin, Ledecky, Schmitt and Bobo Gigi

Unless Bobo Gigi decides to:
1. apply for US citizenship, and
2. undergo sex re-assignment procedure

I can’t see that free relay ever happens.

Those are fast and encouraging times!! I’m assuming from the name that Hurricane Aquatics is somewhere in south Florida; who is her coach and is she training with any other elite teammates?

Hurricane Aquatics appears to be the club program at the University of Miami, officially directed by the college coaching staff and head coach Andy Kershaw. Hard to say if Hoff trains under them full-time or not, though, since club affiliations can at times be merely name banners.

You have to wonder if she’ll wind up having any connection to the new Aaron Ciarla pro group forming in Miami with Lara Jackson and Elvis Burrows.

She could always head over to Gulliver which is about 2 miles from The U of M. They have nice program, great coaching staff, and there are male swimmers who could more than challenge her.

Hoff looked good yesterday and today. I think she was surprised at the 200 IM time because she had a nice smile when she saw her time. I left before she swam the 100 back.

I believe she is swimming with coach at the University of Miami and the women’s team. I think they have a nascent club team but I don’t know if there are any elite swimmers in either program or even if she practices with the club team.