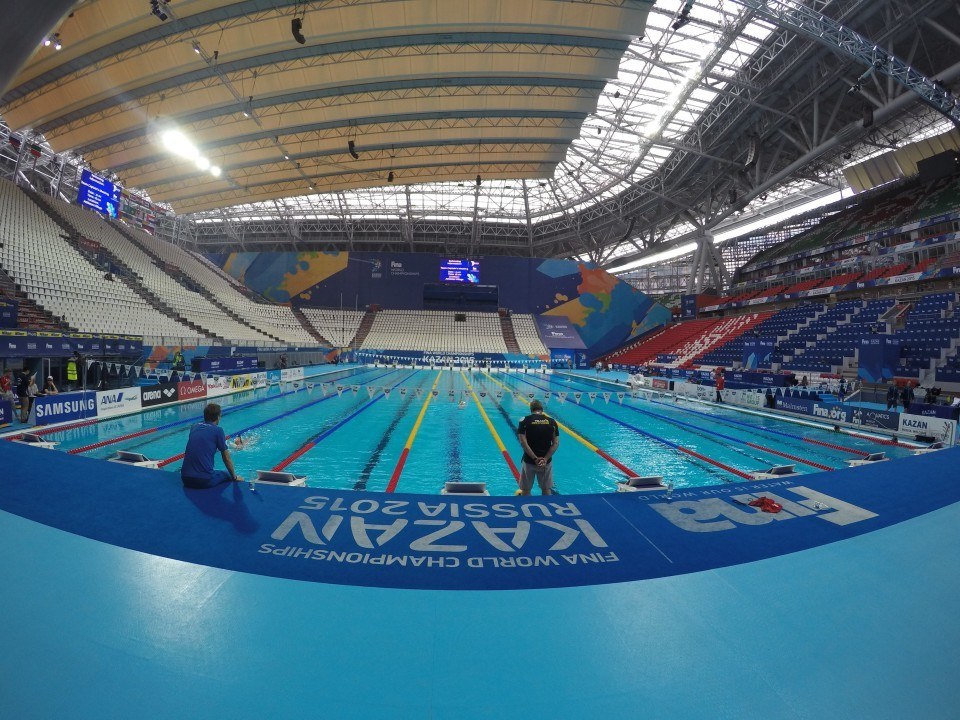 The Tashkent, Uzbekistan native has one more opportunity to post fast swims in long course meters and qualify for 2016 Olympic competition in Rio before returning to Kansas for the start of the regular season. Current photo via Elvis Burrows

KAZAN, Russia – It was one of those days Yulduz Kuckharova won’t soon forget, even though she may want to. The Kansas junior-to-be broke her favorite snorkel, ripped her competition suit 20 minutes before her preliminary race, and managed to lose her goggles, all while still swimming close to a personal best in the 50-meter backstroke at the 2015 FINA World Championships inside Kazan Arena Wednesday.

“Very. Lucky. Day,” Kuchkarova tweeted sarcastically, hours after again placing third in her heat and finishing an unsatisfying 32nd in a field of the best swimmers on the planet. Despite the struggles, like Monday’s swim in the 100-meter backstroke, Kuchkarova’s time of 29.37 was close to her personal best and among the top times ever swum by an Uzbekistani national.

Swimming in lane six of the third heat, Kuchkarova was out-touched by a pair of veterans as Guatemala’s Gisela Morales (28.94) and Sweden’s Magdalena Kuras (29.33) finished first and second, respectively. Kuchkarova’s time was 1.71 seconds behind the fastest time of 27.66 by China’s Fu Yuanhui. In the semifinals, Yuanhui swam the fastest time in the world this year (27.18) and second-fastest women’s 50-meter backstroke of all-time to qualify as the top contender for Thursday’s event final.

Kuchkarova set a national record in the 50-meter backstroke (29.31) at last year’s Asian Games before turning in one of the best backstroke seasons by any Kansas Jayhawk. A runner-up in both the 100- and 200-yard backstroke at the Big 12 Championship, Kuchkarova holds the second-fastest times in Kansas history in both events.

The Tashkent, Uzbekistan native has one more opportunity to post fast swims in long course meters and qualify for 2016 Olympic competition in Rio before returning to Kansas for the start of the regular season. She’ll compete in the 50-, 100- and 200-meter backstroke – although the 50 is not an Olympic event – for Uzbekistan at the FINA/airweave Swimming World Cup event in Moscow, Russia, August 11-12.

Kansas swimming and diving begins the 2015-16 season on Oct. 2 with an intrasquad meet before opening the regular season with a double dual against Denver and Missouri State, Oct. 23-24. Both meets, the first of eight total home events in the area, will be held inside Robinson Natatorium.