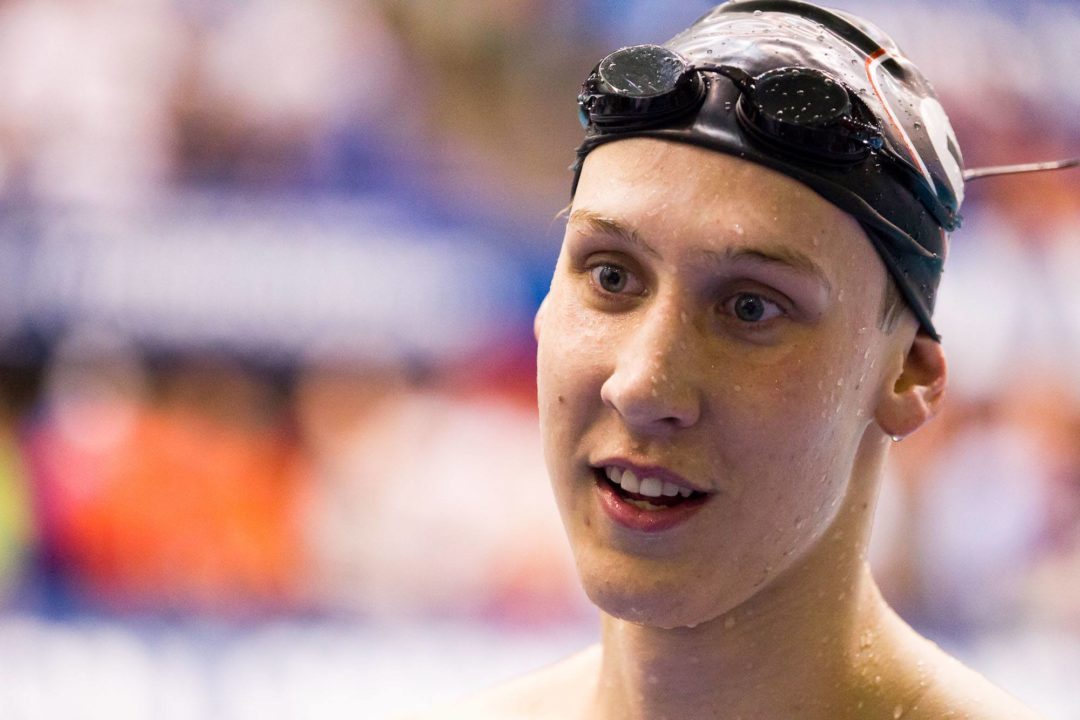 The front half of Chase Kalisz' 400 IM should continue to improve this year, especially after he won the 200 fly on Friday in a lifetime best. Archive photo via Tim Binning/TheSwimPictures.com

In their first road meet of the season, the undefeated Georgia men and women hit the road for Baton Rouge on Friday, where they swept LSU. The final scores read 180-112 for the men’s team and a 170.5-118.5 for the women’s team.

The meet kicked off with a 1:41.65 in the medley relay for Georgia. In an interesting tactic that reflects the team’s depth in freestyles and relative weakness in backstroke without freshman Olivia Smoliga (who wasn’t at this meet), Georgia used defending SEC 50 free co-champion Chantal van Landeghem on the lead-off leg of this medley. She was beat to the first exchange by LSU’s Caley Oquist, but that was the last lead the Tigers would have.

Melanie Margalis dove in next and split a 27.74 on Georgia’s breaststroke leg, a blistering split, to put the Dawgs in front for good. Notably, both teams had solid anchors: Georgis from Jessica Graber in 22.67, and LSU from Amber Carter in 22.75.

With that swim, we now see an All-American breaststroker leading the country in the 200 back. It’s no wonder, then that she finished in the top 8 at NCAA’s last year in both IM races, and should expect to do so again this year.

Georgia’s Amber McDermott and Brittany MacLean are a lethal 1-2 distance punch. They went 1-2 in the meet’s second women’s event the 1000 free with times of 9:47.7 and 9:48.9, respectively. McDermott went out much faster than did MacLean, though MacLean had a nice kick on the last 50 yards.

Shannon Vreeland, who is Georgia’s latest All-American, won the 200 free in 1:47.60. It was LSU’s sophomore Megan Cox, though, that took 2nd in this Georgia specialty event with a 1:49.97. Cox and fellow sophomore Danielle Stirrat (though she took only 6th in this race in 1:53.5), LSU is developing a strong nucleus to their sprint group.

With Margalis focusing on the backstroke races individually, Georgia sophomore Annie Zhu was left to own the breaststrokes. She won the 100 in 1:02.83 first, beating LSU’s Torrey Bussey (1:03.66) and Georgia freshman Emily Cameron (1:04.57).

Zhu then won the 200 breaststroke as well in 2:13.44, five seconds ahead of everyone else (though Georgia did finish 1-3 in the race).

The only win of the day for the LSU women went to freshman Kara Kopcso, who beat Georgia All-American Lauren Harrington 1:59.06-1:59.36. That’s an eye-popping swim for Kopcso as it ties (to the hundredth) her lifetime best in the race in her very first intercollegiate NCAA race.

Harrington would win the sprint 100 fly toward the end of the meet with a 54.44. She had a pair of great swims individually in this meet, even though only one walked away with a win, and in this 100 she was a second-and-a-half faster than she was in the same weekend of 2012 against Arkansas.

Van Landeghem swapped her test in the backstroke back for her more traditional freestyle headed into the diving break, and won the 50 yard race in 23.19. LSU’s Carter was 2nd in 23.32, and Georgia’s Jessica Graber was 3rd in 23.34.

Coming out of the diving break, Georgia looked even more dominant in the 100, where National Teamer Shannon Vreeland won in 50.56, followed by Graber in 50.79 and van Landeghem in 51.14.

In the men’s meet, Georgia started things off with a 1:30.56 in the 200 medley relay, with LSU putting up a surprisingly-good fight of 1:30.99 for 2nd. This is probably the better of the two medleys for LSU, and the worse of the two medleys for Georgia, but that sort of a battle is a positive for the Tigers to kick off their season. It included a 21.6 fly split from Frank Greeff.

Georgia was led by a very good front half, where freshman Taylor Dale split 22.5 and National Teamer Nic Fink was 25.20.

In that relay, Dale actually outsplit his sophomore teammate Ty Stewart, despite Stewart having an incredible meet. Also on the B-relay for Georgia, which finished in 1:31.40, was freshman Chris Powell, who had the best freestyle split of the field in 20.26.

Though Stewart got outsplit there, it wouldn’t happen again at the meet. He won all three of his individual events, beginning with a deep 100 backstroke.

Stewart then added a four-plus second margin of victory in the 200 back, touching in 1:45.85 to move among the top 5 in the country so far this year, and concluded his night with another monstrous margin in the form of a 3:52.16 in the 400 IM at the end of the meet.

Kalisz was an NCAA Champion in the 400 IM last season, but expect him to really make big moves in his other races this year, specifically that 200 breast where he was only 33rd at NCAA’s (and almost three seconds off of his best time). This swim on Friday was four-tenths better than Kalisz’ prelims swim from last year’s championship meet, in fact.

Kalisz’ other individual event, the 200 fly, also resulted in a win with a big 1:45.48. That topped LSU’s Greeff and his 1:48.87. As Kalisz really has only one hurdle between himself and being the best 400 IM’er in the world, and that being improving his front-half, his 200 fly here was a lifetime best. That’s a great start to improving the front half of swimming’s most grueling race.

And then there were the male freestylers: Georgia’s most intriguing group this season. Sophomore Matias Koski, one of the most versatile freestylers in the NCAA, started his meet by winning the 200 free in 1:38.20 (the only swimmer under 1:40 in the race), and then the 100 free (45.03) before falling to Reynolds in the 100 fly (Reynolds was 48.9, Koski 49.7).

To close the meet, the Georgia men put up a good 3:01.43 in the 400 yard free relay, with LSU’s top group touching 2nd in 3:03.52. With Chris Powell swimming well, the Bulldogs perhaps have more options on these relays than they might have though. He split 45.2 on the B relay.

Chase Kalisz’ butterfly is much better this year.
His breaststroke and his freestyle were impressive in Barcelona.
He still has to improve so much his backstroke. I’m sure he works very hard that stroke 24/7 in Georgia or in Baltimore. It’s the key for a potential 400 IM olympic gold medal in 2016.

Funny to see that his future teammate at Georgia, 200 IM and 400 IM world junior champion and other 2016 olympic contender, Gunnar Bentz, has exactly the same profile. He has done huge improvements on his butterfly this year. He has now a beautiful and efficient butterfly. He’s great on breaststroke and also has a monster freestyle finish. And he still has to win a few seconds on backstroke.