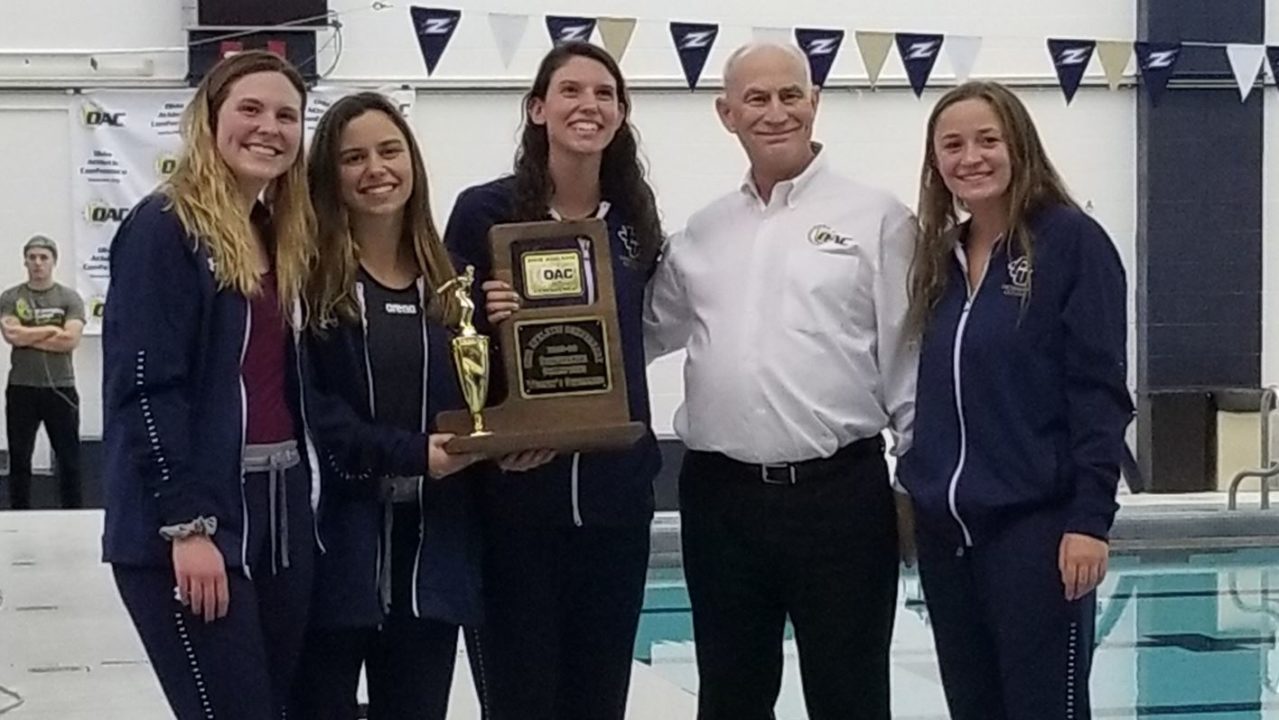 The John Carroll women's total of 974.5 points was the most ever scored in an OAC Championship, exceeding the Blue and Gold's 2018 total of 885 points. Current photo via John Carroll Athletics

2019 Winter Junior Nationals qualifier Tommy Hughson will swim for the University of Chicago beginning in the fall of 2021.

Cierra McCarty of Tacoma, Washington has verbally committed to make the 3,000 mile trip cross-country to swim at Tufts University in the fall.

Ryan Hillery, who has been on fire in racing post-quarantines, will head to Division III powerhouse WashU in St. Louis next fall to begin his college career.

Rowan University snags a commitment from Bella Stefanowicz for their incoming class of 2025, adding backstroke and mid-distance depth.

For the fourth consecutive year, the Ohio Athletic Conference Championship banner will reside in University Heights.

The John Carroll University women’s swimming and diving team did it in dominating fashion. Historic fashion to be precise.

With a margin of victory of over 379.5 points, the Blue Streaks claimed this year’s title over opposing schools Baldwin Wallace, Mount Union, Ohio Northern and Wilmington with the largest margin in OAC history. And that’s not all.

JCU’s 974.5 total points were the most points ever scored in an OAC Championship, exceeding the Blue and Gold’s 2018 total of 885 points. Head coach Mark Fino and staff were recognized as OAC Staff of the Year for their record weekend at the Ocasek Natatorium in Akron.

This is the Blue Streaks record 20th conference championship.

The Saturday finale of the three-day race began with the longest race of the weekend.

Freshman Lauren Spence swam the 1,650 yard freestyle in 18:46.33, compiling 12 points with her seventh place finish. In her first time competing in the event, junior Paige Wnek added six points in the event for the Blue and Gold, clocking in 11th.

From there on out, the Blue Streaks did not have one individual lose a race.

In the second race of the evening, Spenser Kale capped off her final career race with a personal best victory of 2:10:10 in the 200 yard backstroke. Kale was joined by Maddie Panus and Felice Ferrante, who were just .77 seconds and 2.84 seconds away from matching Kale’s victory; They finished fifth and seventh, respectively.

JCU received help in the “B” final as well. Katelin Avenir won the 200 back, rounding out an astounding 55 total team points in the event.

In the 100 yard freestyle, Ashley Lynch led a charge of four swimmers finishing in the top nine. Lynch won the race in 53.17, which was a personal best. Hope Scherger swam to fourth place, Tori Vale halled in sixth and Olivia Talamo totaled ninth. Vale’s time of 55.42 was a personal best in a final — she swam .17 seconds faster in the prelims.

Then, the John Carroll women had their first 1-2 finish of the day.

Gwyn Ledrick and Shelbi Shearer earned gold and silver in the 200 yard breaststroke. Ledrick’s time of 2.19.30 was over 10 seconds better than her teammate Shearer.

Ledrick was recognized as OAC Swimmer of the Year for the second straight year. She also qualified for the NCAA Division III championship “B” cut with her time of 2:18.56 earlier in the season — her time on Saturday would qualify her as well.

As the final day continued, the young swimmers rode the Blue Streaks into the sunset.

JCU turned towards the fearsome freshman Ynyra Bohan to claim a first place finish in the 200 yard butterfly and set a personal record, completing the race in 2:09.61.

Bohan wasn’t the lone Blue and Gold swimmer to finish strong in the 200 fly. Maddie Dolce (3rd), Emily Yoos (4th), and Rachel Halapchuk (6th) aided JCU to their team score of 889 points before the divers hit the deck. Dolce earned All-OAC accolades for swimming the race in 2:16.40.

The divers did their part as well in the 1-meter. The freshman trio of Catherine Steinwachs, Maria VanDevere, and Kathryn Visco collected 45 points by finishing third, fourth, and fifth, respectively. They fell behind two veterans in senior Ellie Clymer (senior) and Sarah Hrycyk (junior).

Steinwachs was honored as the OAC Diver of the Year for her impressive weekend in both the 1 meter and 3 meter diving. She won the 3 meter diving on Friday.

Saturday night ended in picture-perfect fashion with a victory for the fourth consecutive year in the 400 yard freestyle relay.

The quarter of Ledrick, Scherger, Lynch and Maddie Panus claimed gold with a time of 3:32.86. The Blue Streaks swept the five women relays in the OAC Championships with the victory.

The weekend concluded with both the men and women Blue Streaks (coaches included) jumping in the pool for a fourth consecutive season. A tradition like no other.

Roll with the winners.

The Blue Streaks defeated opposing schools Mount Union, Ohio Northern, Baldwin Wallace, and Wilmington, with a 967-point showing over the course of three days at the University of Akron’s Ocasek Natatorium.

It was fitting that the day began with last year’s swimmer of the year earning All-OAC accolades.

Forrest Campbell was named OAC Swimmer of the Year and will most likely head to Greensboro, North Carolina, to compete in the Division III National Championships.

Then, the Blue and Gold achieved 1-2 finishes in back-to-back events. And most importantly, separated themselves from the pressure of the Purple Raiders.

In the 200 yard backstroke, John Carroll gained ground on the winning margin of  Mount Union. The freshman duo of Liam McDonnell and Jonathan Simoes finished first and second, only clocking .59 seconds apart. Evan Gainous supplemented with a fifth place finish, totaling a combined 51 points for the trio.

The 100 yard freestyle was the Blue Streaks’ bread and butter. Forrest Campbell and Michael Heller achieved gold and silver. Jake Farr (4th), Jackson Cooper (5th), Patrick Folan (8th) and Aidan O’Neill (9th) all finished the race within under two seconds of each other.

JCU went ahead by over 100 points on Mount Union with the 90-point showing in the 100 freestyle.

Isak Alin of Wilmington slowed down the Blue Streaks in the 200 yard backstroke. But only by .14 seconds. Jonah Venos, Adam Lenz and Mason Beck came in 2-3-4, all finishing within under a second of each other. Venos and Lenz registered personal records.

Earlier, Sriubas was not satisfied with his third place finish in the 1,650 free. He decided to win the 200 yard butterfly in 1:52.44, repeating as an OAC champion and was just .03 seconds away from breaking his school record.

Once the divers hit the deck, the Blue Streaks ran away with the lead. Sophomore Jack Lausin was All-OAC with his second place showing in the 3 meter diving competition. Christian Litwinowicz claimed sixth, tallying 13 points for the Blue and Gold.

The Blue Streaks finished off the OAC Championship with an exclamation point. The quartet of Lenz, McDonnell, Campbell, and Jacob Farr won the 400 yard freestyle with a time of 3:03.07, an OAC record.

That same quartet qualified for the Division III National Championships. One more opportunity for the Blue Streaks to achieve another victory.

Head coach Mark Fino and his staff (Charlie Lownes, Lewis Fellinger and Maria Eidam) were honored as staff of the year for yet another impressive showing in the conference championships.