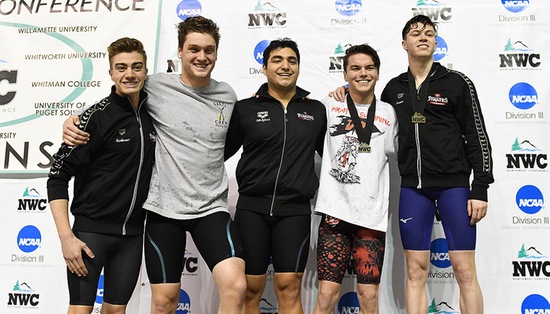 The Whitworth men and Whitman women continue to lead in team standings at the conclusion of day three of the 2020 Northwest Swimming Championships. Current photo via Whitworth Pirates

FEDERAL WAY, Wash. –  The Whitworth men and Whitman women continue to lead in team standings at the conclusion of day three of the 2020 NWC Swimming Championships at Weyerhaeuser King County Aquatic Center in Federal Way, Wash.

In the first event of the evening finals session, Puget Sound’s Kelli Callahan earned her second first-place finish of the weekend in the women’s 400 individual medley with a 4:26.45 mark, with Claire Cranch of Pacific Lutheran just over four seconds behind with a 4:30.94 time. Whitman’s Bella White swam a 4:33.65 mark to claim third. For the men, Linfield’s Noah Cutting touched the wall in 4:01.90, followed by Dylan Reimers of Puget Sound’s 4:04.51 mark and Connor Florey Whitworth’s time of 4:06.92.

Pacific Lutheran’s Bailey Hamilton swam the women’s 100 butterfly in 57.27 to capture her first individual title of the weekend. Calista Skog of Puget Sound finished just behind Hamilton in 57.65, with Kaitlyn Wornath of Whitworth claiming third in 58.11. Linfield’s Neirton Oliveira was the individual medalist in the men’s 100 butterfly, setting a new Northwest Conference Championship record with a 48.01 time. Edan Donaldson earned a second-place finish for Linfield with a time of 49.33, followed by Lewis & Clark’s Kyle Monteleone’s 50.19 – the first top-three finish for the Pios this weekend.

Puget Sound’s Callahan won yet another individual title in the women’s 200 freestyle, finishing in 1:52.10. Abbey Felley of Whitman swam a 1:54.43 time to earn second-place, with Carly Hoff of Whitworth earning a 1:56.88 time, good for third. On the men’s side, Whitworth’s Finn McClone was the individual medalist in the men’s 200 freestyle, touching the wall in 1:40.85. Tanner Filion of Whitman was just under two seconds behind McClone with a 1:42.18 mark, followed by Ben Fritz’s 1:42.65 time for the Bearcats, earning an individual third-place time.

Whitworth’s Siegler set a conference record in the women’s 100 breaststroke with a time of 1:03.29, followed by Shea Tsuha of Whitman’s second-place time of 1:05.49, and Victoria Nguyenle of Pacific Lutheran’s 1:06.28 mark. Whitworth’s Lempert earned yet another individual title, completing the men’s 100 breatstroke in 55.97, with teammate Ean Peterson just behind with a 57.11 mark. The Lutes’ Seth Koivisto captured third with a 57.30.

Whitworth’s Hannah Galbraith swam a 56.32 time in the women’s 100 backstroke, capturing her first first-place finish of the weekend thus far. Mara Selznick of Whitman earned second with a 57.04 finish, followed by Isabel Hendryx of Puget Sound’s 58.18 time. For the men, Tanner Filion completed the men’s 100 backstroke for the Blues in 49.93 to earn the individual title, with the Linfield duo of Edan Donaldson and Neirton Oliveira earning a 50.06 and 50.30 to take second and third place, respectively.

The final day of the Northwest Conference Championship will kick off with the preliminary session starting at 10am tomorrow.