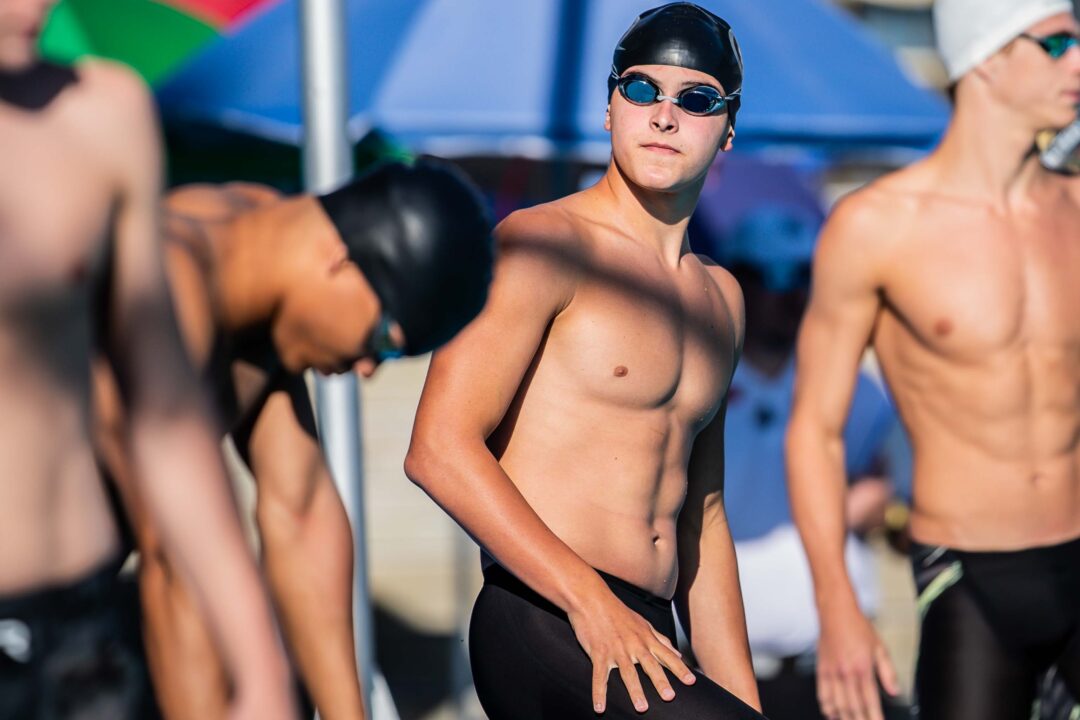 Eccleston, who’s committed to swim at the University of Louisville, swam lifetime bests in all five events he contested, and set new best times in four of them: the 100 breast, 200 breast, 200 IM and 400 IM.

Highlighting the 16-year-old’s stellar weekend was his 200 breast performance, where he blasted 1:57.49 to drop nearly two and a half seconds. He was the only athlete in the field under the 2:00 abrrier, with runner-up Trevor Boodt finishing in 2:04.24. It’s the fourth fastest time by an 18 & under boy in the U.S. this season, and third in the 15-16 age group.

Eccleston had a breakout showing in the long course version of the event this summer. He arrived at Junior Nationals in Irvine with a lifetime best of 2:21.06 and in one day, dropped over six seconds to finish third in 2:14.46.

Adjusted for altitude, Eccleston’s time converts to 1:56.29. That would be the fastest time on the Louisville roster so far this season, ahead of Denis Petrashov‘s 1:57.17 from the SMU Classic.

Note: Altitude-adjusted times can be used for entry purposes at USA Swimming meets, but cannot be used for record or recognition purposes.

Eccleston also rocketed to a 54.19 in the 100 breast and 1:48.78 in the 200 IM, shaving .85 and .68 seconds off his bests in those events, respectively. In his opening swim of the meet, he posted 3:55.93 in the 400 IM, which is a best time by over four and a half seconds. That adjusts to 3:50.93, which would be the second-fastest time for Louisville this season behind Jackson Millard‘s 3:48.99. Both Petrashov and Millard will still be on campus when Eccleston arrives in fall 2024, which is promising for a Louisville team that’s in rebuild mode this season.

On the girls’ side, it was Finley Anderson who shone, clocking 1:55.55 in the 200 back. It’s a lifetime best for the junior Cal commit, and converts to 1:54.35. The Cal women haven’t had their invitational yet, but that would be good enough for second fastest on the roster this season behind Isabelle Stadden.

The 17-year-old also won the 400 IM in 4:33.19, cutting 5.63 seconds off her best. She won by over two seconds, using her powerful front half to get out to a lead. Highland Ranc’s Mai Kawahata made her move on the breaststroke, and actually out split Anderson on both the breaststroke and freestyle legs. However, Anderson had built a big enough lead that it didn’t matter, and Kawahata stopped the clock in 4:35.45.

Anderson also collected an event win in the 100 back, swimming 53.68 for a new best time. It wasn’t the fastest 100 back of the meet though: that belonged to Charlotte Wilson, who we ranked #17 on our Way Too Early Rankings of the Girls’ High School Class of 2024. Wilson is part of an exceptional recruiting class for UVA, and at this meet she fired off a 53.57 100 back leading off the Hilltoppers’ 400 medley relay. That puts her within a second of her lifetime best of 52.70 from March 2022.