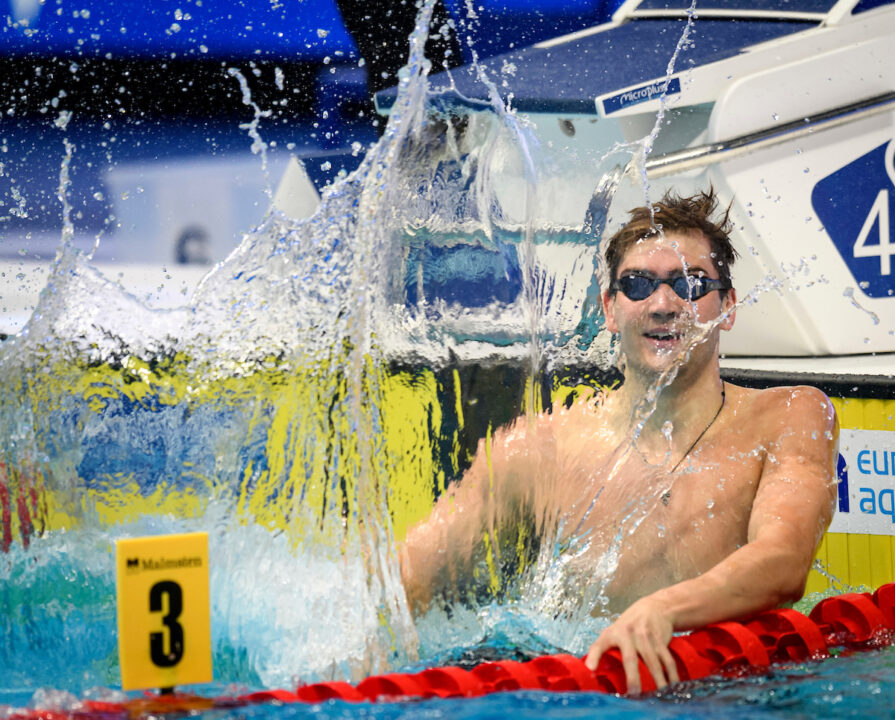 Sprinting dynamo Kliment Kolesnikov took down one of the oldest male world records on the books during the fourth night of finals from the Russian Short Course Championships in Kazan, setting a new mark of 22.11 in the men’s 50 backstroke (SCM).

Although Russian swimmers are currently banned from competing in all FINA events, the global governing body has said that as long as all FINA rules are followed, world records set at the competition will stand up as official.

Kolesnikov had set a new Russian Record in the event in the semi-finals, clocking 22.31 to erase his previous mark of 22.47 set at the 2021 European SC Championships.

The 22-year-old also posted a blistering time of 22.55 in the prelims, meaning he’s produced three of the eight-fastest swims ever over the last 36 hours. Kolesnikov now owns five of the 10 fastest swims of all-time.

When Manaudou set the world record at 22.22 in 2014, he absolutely annihilated the previous mark of 22.61, set by American Peter Marshall in 2009, and the record went unthreatened for nearly eight years. Kolesnikov’s 22.47 effort at the European Championships last year was the lone swim to come within three-tenths of Manaudou’s time until Tuesday.

Kolesnikov now sits a whopping 61 one-hundredths faster than the next-fastest swimmer in the world this season—Dylan Carter, who went three-for-three in the event on the FINA World Cup circuit, with his fastest time being 22.72.

Kolesnikov is also the former world record holder in the LCM 50 back, having become the first man under 24 seconds (23.93) in the semi-finals of last year’s Russian Championships before getting down to 23.80 in the final. That record has since been broken by American Hunter Armstrong (23.71).

Kolesnikov also previously held the SCM world record in the 100 back (48.58), a mark that was lowered by another American, Coleman Stewart, last August in 48.33.

Earlier in the competition at the Russian Championships, Kolesnikov swam a time of 48.82 in the 100 back to overtake American Shaine Casas (48.84) for the top time in the world this year.

Russian swimmers will be banned from all FINA competitions through at least the end of 2022, meaning they won’t be racing at next month’s Short Course World Championships in Melbourne, Australia.

Kolesnikov has one more individual event on his schedule, the 100 freestyle, with two days remaining in Kazan.

For 8 years I thought Manaudou’s abuse of his godly underwaters and brute force arm-windmill made 22.22 an untouchable time, but Kolesnikov’s insane distance per stroke really gave him that WR.

Comparing Manaudou’s physique to Kolesnikov, its clear each favour strength and technique respectively. Sometimes I wonder how a Popovici-esque talent (if we ever see one) would swim backstroke in the future

he said he was a backstroker, when he was younger. Might get back to it at some point… who knows.

Ceccon has a very similar build to Popovici and he destroyed the WR of USA’s most jacked swimmer.

The best male backstrokers in recent years have been mostly skinny guys, from Xu, Rylov to Kolesnikov and Ceccon.

Please provide the names of the impartial non-Russian observers who can verify the results. Good journalism.

Surprised there aren’t more people immediately jumping to accuse him of doping; a pleasant surprise. Hopefully we’ve all matured past that point

Don’t accuse him of doping, accuse all the Russians of doping.

that is a truly crazy record right there. We saw a lot of elite backstrokers rip so many 50s in ISL seasons and nobody got close to 22.1. Also it’s wilddddd to me that the 50bk record is now so close to 50fly.

Manaudou’s record really was ahead of its time and the craziest part is that it isn’t even his main stroke!

Does Fina accept this record ?

From the article: “Although Russian swimmers are currently banned from competing in all FINA events, the global governing body has said that as long as all FINA rules are followed, world records set at the competition will stand up as official.”

>all FINA rules are followed
Who is doing their doping control? Hopefully not other Russians.

I assume RUSADA is doing the anti-doping control, but remember that as part of the terms of the current WADA penalties for RUSADA, there is international oversight of RUSADA’s activities. The RUSADA Supervisory board is made up entirely of non-sporting people, and includes an international observer.

Man I wish all that made me feel better.