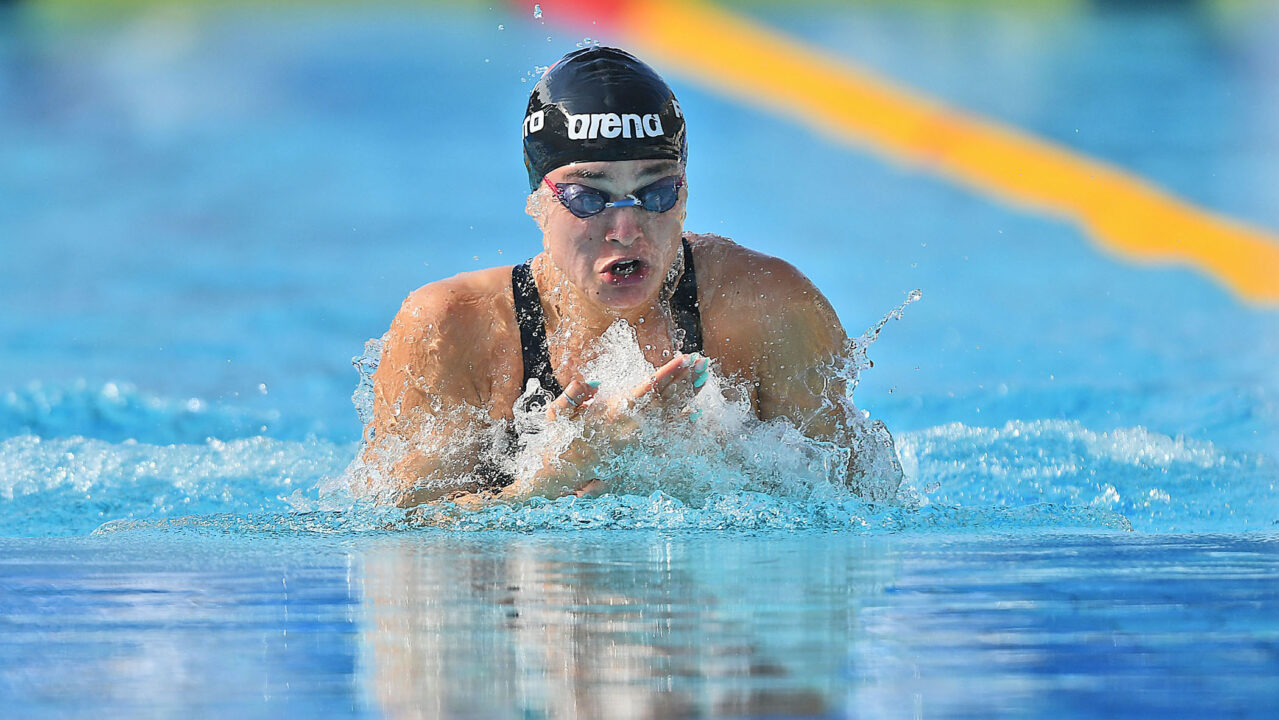 The top four swimmers in the women's 100 breaststroke heats came from Italy, meaning Arianna Castiglioni and Martina Carraro were eliminated from the semis. Current photo via Fabio Cetti

One of the unique aspects of the European Aquatics Championships is that countries are able to enter up to four swimmers—rather than the standard major international limit of two—in any given swimming event.

The caveat, however, is that only two swimmers from any given nation can advance out of the preliminaries, regardless of time.

This situation generally arises a few times in each edition of the championships, where a country has three or four high-level swimmers in one event and we see a bonafide medal contender knocked out after the first round.

Such was the case on Friday morning in the heats of the women’s 100 breaststroke, as the top four times all came from Italians.

Reigning world champion Benedetta Pilato led the field in a time of 1:05.77, which is actually faster than her swim from the World Championship final (1:05.93) and just seven one-hundredths shy of her lifetime best.

Lisa Angiolini is the surprise swimmer who will join Pilato in Friday’s semi-final round, as the 27-year-old dropped more than eight-tenths of a second off her PB (1:06.82) to clock 1:06.00 and finish second overall.

Locked out of the semis despite producing the third and fourth-fastest times in the field, Arianna Castiglioni (1:06.55) and Martina Carraro (1:07.04) were both within a half-second of their season-bests, but it wasn’t enough to get through into the next round.

Although Italy taking the top four spots in the prelims is noteworthy, it should also be acknowledged that each of them knew the circumstances they were facing in the heats and had to give it their best effort. The rest of the field, which includes defending champion Sophie Hansson and European Record holder and World Championship bronze medalist Ruta Meilutyte, knew all it would take would be a 1:07-high/1:08-low and they’d comfortably make it back.

But still, Italy’s display of dominance in the event was certainly something to see.

We saw something similar, but not quite to the same extent, in the men’s event on Thursday, where Italy’s Nicolo Martinenghi (59.08) and Federico Poggio (59.49) qualified first and third overall, resulting in sixth-ranked Simone Cerasuolo (1:00.51) and ninth-ranked Andrea Castello (1:00.72) getting knocked out.

In the women’s race, with Castiglioni and Carraro eliminated, the next woman up was Denmark’s Clara Rybak-Andersen (1:08.79), and then the last spot in the final saw a tie between another Dane, Thea Blomsterberg, and German Bente Fischer, who both clocked 1:09.18.

Rather than have the two women swim-off, the Day 2 finals heat sheet shows that they’ll have 17 women race the semis, with Fischer operating out of Lane 0 in the first heat.