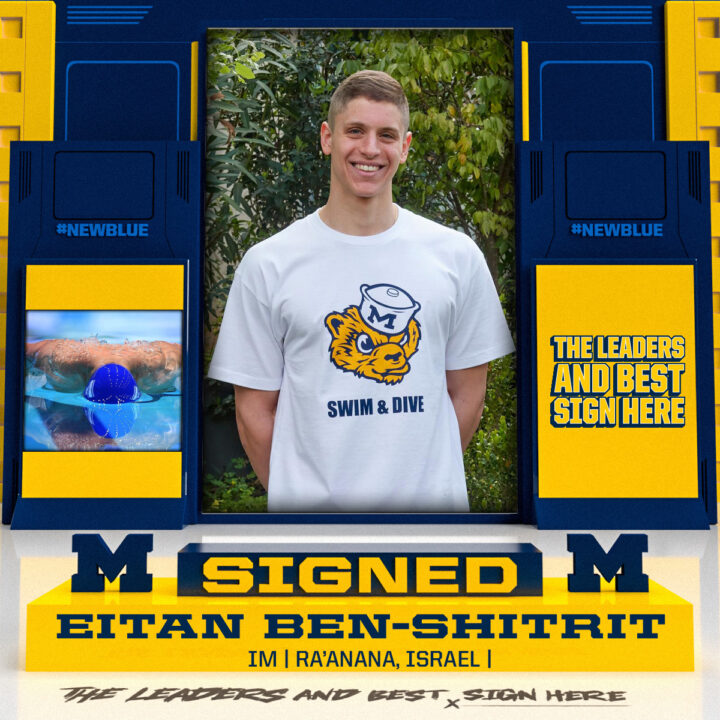 Israeli junior record holder Eitan Ben-Shitrit is taking his rapidly-improving IM times to the University of Michigan this fall. Current photo via Courtesy of Michigan Athletics

Israeli teenager Eitan Ben-Shitrit is taking his rapidly-improving IM times to the University of Michigan in the fall.

The 18-year-old crushed his previous best in the 400-meter IM prelims by more than six seconds with a 4:07.55 at December’s World Short Course Championships in Abu Dhabi. Ben-Shitrit went on to place 6th in the final behind young American stars such as Kieran Smith and Carson Foster. At the same meet, he swam the butterfly leg (52.45) on the 4×100 medley relay team that broke the Israeli record.

A native of Ra’anana, the Israeli junior record holder also finished 8th in the 400 IM at the short course European Championships in Kazan last November. Trimming another four seconds is no easy task, but Ben-Shitrit might be closing in on Gal Nevo’s Israeli record of 4:03.5 in the event.

According to SwimSwam’s converter tool, Ben-Shitrit’s best SCM 400 IM time translates to approximately a 3:43.01 in SCY, which would have placed 5th in the event at February’s Big Ten Championships.

The Wolverines boasted the top two finishers in the 400 IM final between champion Jared Daigle (3:41.01) and runner-up Jake Mitchell (3:41.39). Daigle, a senior, will return for his fifth and final season in Ann Arbor while Mitchell, a sophomore and member of the Tokyo Olympic team, announced his transfer to Florida last month. Michigan placed 3rd at the Big Ten Championships and 22nd at the NCAA Championships in March, the team’s lowest finish since placing 25th in 1986.

Wonder where he’ll transfer to?

Leave the man alone he’s committed to a great school

I think people forget what an impressive history Michigan has with swimming. They had a down year after back to back Big Ten Championships and something obviously needs to change. But we don’t know exactly what is going on in Ann Arbor.

This is almost the same coaching staff that won NCAAs in 2013 and won multiple Big Ten Titles. They know how to swim fast, coaches have Olympic medals under their belts, they just need to figure out what’s up with the culture. Wishing Eitan the best.