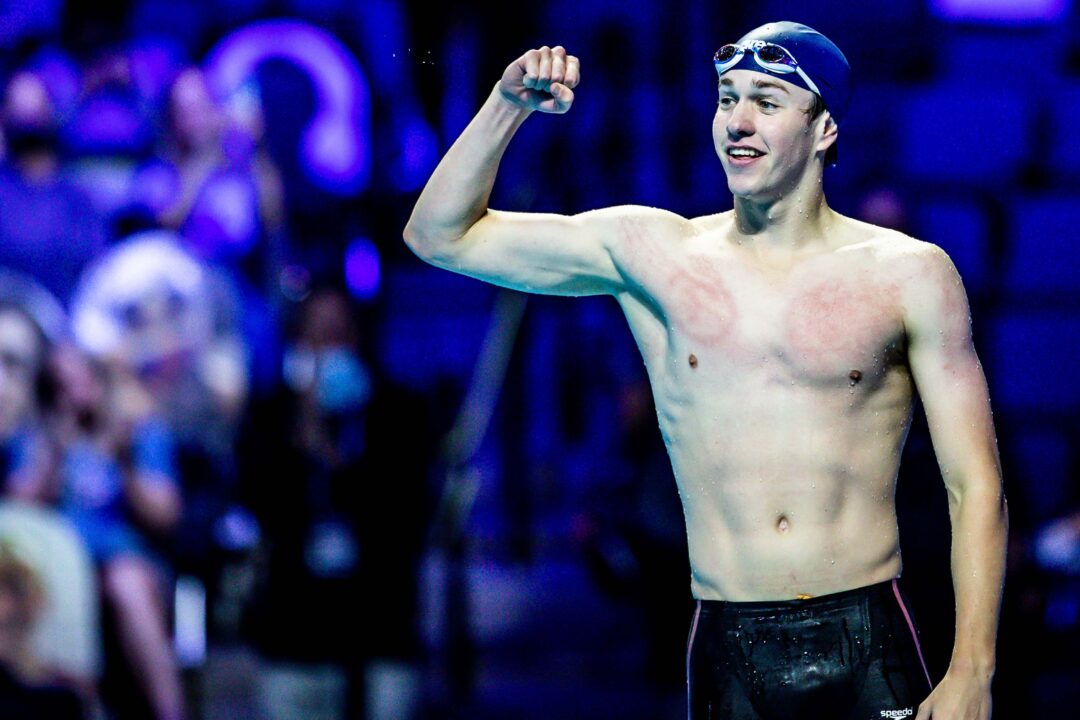 Former University of Michigan swimmer Jake Mitchell, who recently entered the transfer portal, announced via Instagram that he would be transferring to the University of Florida for the 2022-23 season. He spent his first two collegiate seasons at Michigan and most recently competed for them at the 2022 NCAA championships this March.

Very excited to announce that I will be continuing my academic and swimming careers at the University of Florida! Thank you to everyone who has helped me along the way. Go Gators! 🐊🐊🐊

Aside from college, Mitchell qualified for the Tokyo 2020 Olympics in the 400 free, and left Michigan to train at his old club, the Caramel Swim Club, leading up to trials. He ended up making the final of the event, placing eighth overall.

Mitchell is not the only Michigan Wolverine to transfer out or leave the team. Right before NCAAs, All-American swimmer River Wright entered the NCAA transfer portal after being off of his best times all year. In addition, although he didn’t transfer, 2021 Big Ten runner up Wyatt Davis skipped NCAAs and went back home to train at Carmel Swim Club to focus on his mental health, stating that he would be returning back to Michigan in the fall of next season.

On the women’s team, NCAA Record Holder and Olympic champion Maggie MacNeil announced that she would be leaving Michigan to use her fifth year of eligibility at Cal, and Michigan sophomore Sophie Housey recently entered the transfer portal after a season plagued with injuries and mental health struggles.  Housey has also recently visited Florida, which sparked some speculation that she might be joining Mitchell down in Gainesville.

At men’s NCAAs, Michigan finished 22nd overall, a disappointment from their 12th place finish in 2021. Florida, on the other hand, took third overall and won two relay titles in the 200 free relay and the 200 medley relay, breaking the NCAA and US Open record in the latter race.

At Florida, Mitchell will join a very strong distance and mid-distance group that took 9 out of the top 11 finishes in the 1650 free at SECs this year. Some of his new training partners will include his Olympic teammates and former NCAA rivals Bobby Finke and Kieran Smith, as well as Olympic medalists like Katie Ledecky, Caeleb Dressel, and Natalie Hinds that will be in the pro group.

Didn’t U of M lose a 4 IM’r and also losing another one to 5-years too? One has to wonder what mike bottom and the coaching staff have going through their heads .

Berlitz and Chan, both not mentioned in the article

Did those 5 years finish their undergrad degree?

Notably, Sophie Housey was also on a visit to Florida this week.

When was the last time a swimmer of this caliber transferred? I have a short memory.

And Runge, whilst I don’t know / recall the backstory(ies)…transferred…twice? Cal – Wisc – Arizona right?

Yes. That did not end well.

I’d say Maxime Rooney, not an Olympian but had times comparable to being one, 48.2/1:47.1 freestyles.

If we are including grad transfers, Maggie MacNeil is likely a bigger transfer from that team alone. Especially now that it came out that she was injured during NCAAs. Her events are going to be extremely challenging moving forward, but still is elite in just about everything + huge relay asset.

This does not come as a surprise, but still congrats to Florida!

after seeing the practice and pancakes set yesterday, any distance swimmer not training in Florida needs to get their head checked.

As a Canes fan who remembers when the football game was an annual matchup for decades until one side ran away once the other program became dominant…it will always be Orange, Blue and Mostly Yellow

Great addition for Florida. With that being said, no one cares since they still won’t beat Texas or Cal at NCAAs.

Give it a few years for the recruiting to catch up with the results and they will.

A couple years after Eddie retires

I don’t disagree. But UM did train him enough to get him to the Olympics and become a finalist. And McNeil to a gold medal. Pretty damn good.

I’ll attribute macneil’s gold to Rick Bishop instead of UM. Same as Haughey’s