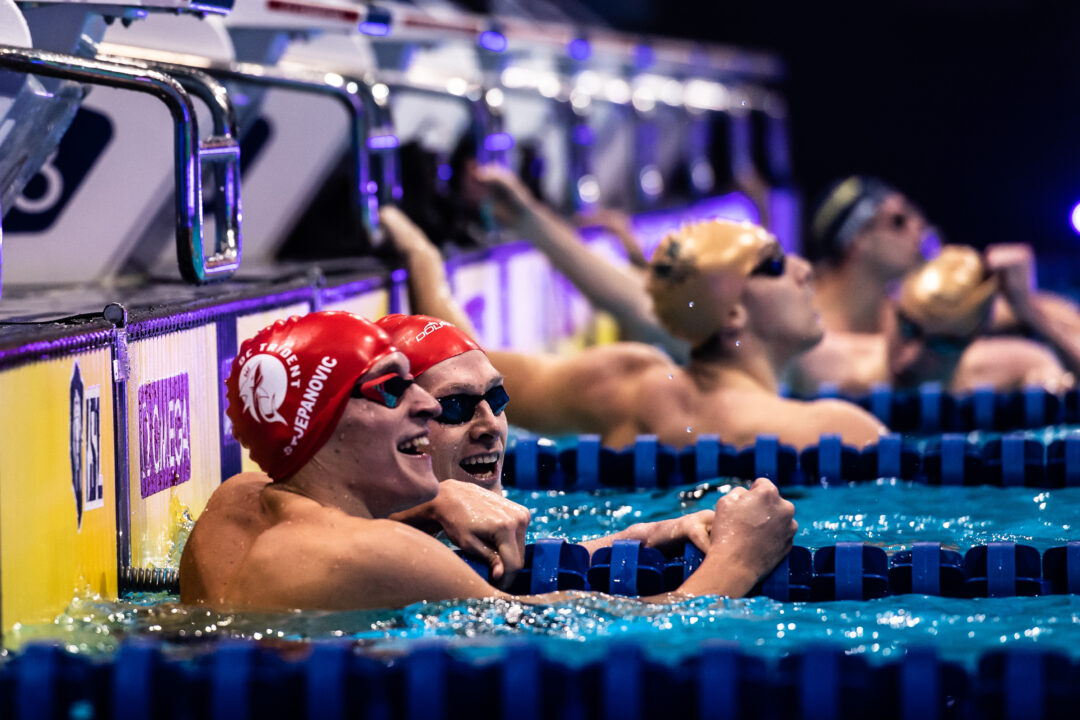 Over the last two seasons, the ISL has held 31 matches in just three locations due to the pandemic. Archive photo via Mike Lewis/Ola Vista Photography

For the first time since its inaugural season in 2019, the International Swimming League (ISL) will be getting back on the road in 2022.

The league announced a 24-match schedule for its fourth season on Friday, and while specific locations for the matches are still to be determined, the Season 4 slate does indicate the matches will take place in a variety of locations around the globe.

In the ISL’s debut campaign in 2019, there were seven matches in seven different locations, with three in the U.S. and three in Europe before the finale was held in Las Vegas.

Season 2 was expected to be an expanded 27-match schedule in a variety of locations, but due to the COVID-19 pandemic and subsequent postponement of the Tokyo Olympic Games, it became a truncated campaign inside a bubble in Budapest, Hungary.

In Season 3, the entire regular season took place in Naples, Italy, and then the playoffs and league final were in Eindhoven, Netherlands (the final was initially going to be somewhere else, but the ISL ultimately decided to stay in Eindhoven and move up the finale date to eliminate any scheduling conflict for athletes with SC Worlds).

The ISL has put North America, Europe and the Asia/Pacific region on its Season 4 schedule:

The current COVID-19 climate, which appears to have led to the postponement of the 2022 World Championships in Fukuoka, Japan to 2023, could provide hurdles in following the announced schedule, particularly in the Asia/Pacific Region due to stringent restrictions.

Through three seasons and 38 matches, the ISL has hosted competitions in eight different locations:

After Season 1, the ISL added two expansion clubs in the form of the Tokyo Frog Kings and Toronto Titans. Japan and Canada are two markets the league has yet to venture into due to the pandemic, but if able, they’ll likely be on the Season 4 slate.

Insanity. Why not take some time to analyse what they’re doing wrong? The travel logistics alone, given lockdown uncertainties and vaccination mandates, are way too complicated, let alone the total expense. ISL haven’t thought it through again. Yet another fanciful spur-of-the-moment move of the delusional helmsman. Less than 4 months out, I wonder how they are going to pull it off.

It’s disappointing to see LCM get so little in 2022. This very well could have been the year when Dressel would’ve taken down more records, specifically those ancient, super suit era 50 & 100 free LCM records.

Please return to Lewisville, TX – it’s a GREAT facility and the crowds LOVED the great racing!

Read the article yo

>”while specific locations for the matches are still to be determined.”

Mike In Dallas is right. There’s a list of prior locations, which it appears you assumed are the locations for season 4. Reading comprehension matters, yo.