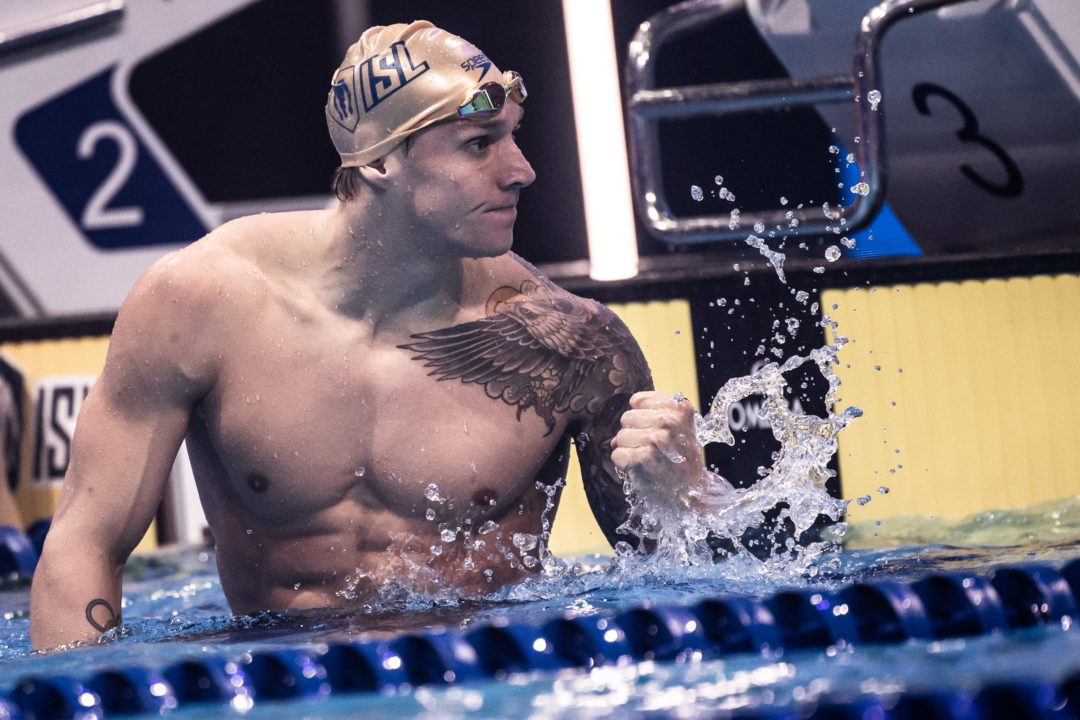 Originally scheduled for January 2022, the ISL Final has moved to December 3-4 to avoid any potential issues with quarantine and travel restrictions. Archive photo via Mike Lewis/Ola Vista Photography

The International Swimming League (ISL) Season 3 Final has been officially scheduled for December 3-4, 2021 in Eindhoven, the Netherlands, the same site as the upcoming ISL playoffs.

The final was initially expected to be held in January 2022 at a location to be determined, but due to potential quarantine issues restricting swimmers from traveling to the final, the ISL has shifted the dates to take place shortly after the playoff round.

“Since the beginning of 2021, we had planned to hold the ISL Season 3 Final in early January 2022,” ISL CEO Konstantin Koudriaev told SwimSwam. “However, the reality of the post-Covid era has wreaked havoc with many such plans — including ours.

“While finalizing our preparations for the Play-offs, to be held this month, we realized that with COVID-related restrictions persisting in so many countries, we would have to adapt and change in what remains a very fluid situation.”

Koudriaev noted that after speaking to swimmers and internal discussion inside the ISL, they came to the conclusion that it was in the league’s best interest not to take a break during December and move straight into the final.

“In fact, doing that (taking a break in December) could mean that some of the swimmers would simply not be allowed to travel again because of quarantine restrictions in their home countries,” Koudraiev said.

The playoffs, which begin on November 11 at the Pieter van den Hoogenband Stadium in Eindhoven, are scheduled to wrap up on November 28 (a Sunday), and then the final would begin the following Friday (Dec. 3).

“We are convinced it is in the best interests of the ISL swimmers to hold the Final shortly after the Play-offs. The choice of location flowed naturally from that decision. We are so thankful to the city of Eindhoven for their warm welcome and for their flexibility, and are looking forward to very exciting Play-offs, and to a spectacular Season 3 Final.”

The short turnaround from the playoffs into the final is similar to what the athletes experienced last season when the entire schedule was truncated in a bubble in Naples, Italy to accomodate the global pandemic.

In Season 2, the second semi-final wrapped up on November 16 (Monday), and the final began the following Saturday (Nov. 21).

Swimmers on clubs that qualify for the ISL Final that are also scheduled to race at the FINA Short Course World Championships in Abu Dhabi, UAE, would have almost two weeks in between meets. SC Worlds will run from Dec 12-16 in Etihad Arena.

The ISL playoff phase will feature the top eight clubs from the regular season competing for the four available spots in the league final.

You can find the full playoff schedule here.

Nothing like getting told your taper (or at least partial taper!) has to come a month earlier. Yikes

Chalmers was already aware of this a month and a half ago so probably the other athletes were as well.

Smart . Europe may not be able to access affordable heating gas by Jan .

Might also be cheaper to do it this way too?.. You know, because of money and all………

Peaty please bottle it this week, We need you

Whoa that in a month!