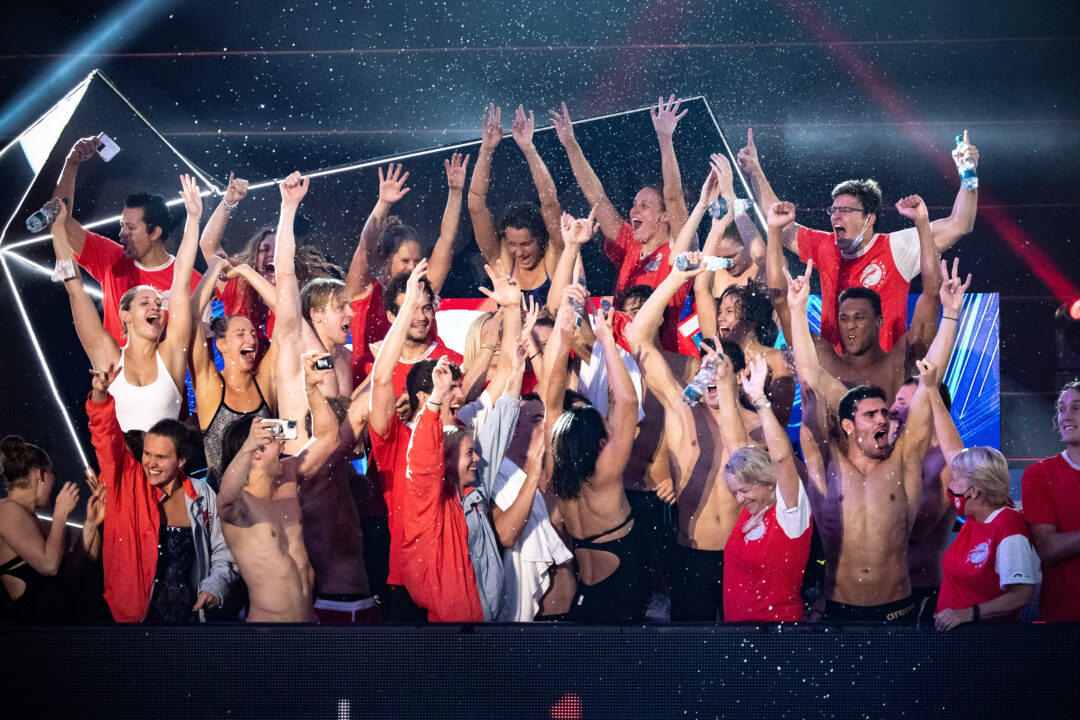 (Above) the DC Trident celebrate a win in the Play In match that propels the team into the Playoffs for the first time in club history. Current photo via Giorgio Scala / Deepbluemedia / Insidefoto

The DC Trident and Iron, based in Budapest, have booked their tickets to Eindhoven, Netherlands for the Playoff via their 1-2 finish in the first-ever “Play In” Match that concluded on Thursday in Italy.

For the Trident, the victory was historic. In the context that this match was intentionally designed of the four worst teams in the league, the win was DC’s first-ever ISL victory, and in fact their first ever top two finish. In season 1, DC became famous for their “third is first” chant in the regular season finale, where a win over the New York Breakers meant that they weren’t the worst team in the league.

Now, they can begin a “first is first” chant, as they head on to Eindhoven.

Iron mounted a furious late-meet comeback, where they’re strongest, but came up 9 points short of DC. That was still good enough to advance to the Playoff round. While the difference between first and second here was about $400 per swimmer, the potential payouts from earning three extra meets easily dwarfs that.

Under the new ISL playoff system this year, the 8 teams will be split into four pairs that will compete against each other in each of their Playoff matches. Each pair will compete against each other pair, which ensures that every team gets at least one crack at every other team in the Playoff. That’s not something we saw in the regular season where, for example, the top two teams Energy Standard and Cali Condors never faced off.

Ultimately, both pairings wound up flipping from seed. Energy Standard draws DC Trident and Cali Condors draw Iron, though in both of those cases, it’s probably moot. The middle of the bracket draw, however, is significant: London is paired with LA Current and Toronto with the Aqua Centurions. That’s a big win for the Titans, because while LA and Aqua have similar seeds, a full-strength LA team is projected to be substantially better than a full-strength Aqua team.

The regular season seedings won’t necessarily be how teams will finish – remember that most teams, especially Energy Standard, London Roar, and LA Current – have a lot of big guns who are expected to rejoin their rosters in Eindhoven, Netherlands.

The ISL has also revealed who will compete in which Playoff Matches. The matches will return to their usual Thursday-Friday & Saturday-Sunday rotation, with each of the 8 Playoff teams competing once each week.

The match to watch will be Playoff #2. The top two teams in that matchup will have a huge advantage in the race for the final, both in confidence and in actual points.

I hope they bring back Kristof.

Is the ISL selling tickets to these?

Nothing announced yet, but I assume they will.

Initial impressions for each match

Ryan Murphy was one of the highest scorers in the league last year. We don’t know for sure, but we think they’ll get him back. That closes the gap to Toronto SUBSTANTIALLY.

Yes, he is the most significant reinforcement they can hope for. IF he does front for play-offs in reasonable shape then it’s most certainly a “Game On” situation for the 4th finals berth as TOR’s scope for play-offs upgrades is significantly less than both LON & LAC. Should LON NOT receive the hoped-for reinforcements then they could well be less sure of a finals berth than initially thought.

Wait I’m just still a bit lost with the playoffs. Does the pair’s mean anything other than for the matchup schedule? Like do the pair’s combine points or something or is it just to see who’s vs who?

Just to see who’s versus who.

If they tried to do a true round robin, where every team plays every other team the same amount of times, it would take too long, and it would eliminate any seeding advantage from the regular season.

I wish they’d switch the first two matches with the last two matches. However, I’ll be curious how many Americans stick around for the last 2 matches though, with them happening over Thanksgiving.

If they swam in college, they’re probably used to missing Thanksgiving.

And don’t forget about Team Iron….

(plus a more rested Emre Sakci)

Hosszu will be a massive wild card. If she performs like she did in 2019 then iron will definitely be strong but it’s hard to see that she’ll be near her 2019 performance just based on her 2020 ISL performance and what we’ve seen this year. That being said I wish her the best of luck and it will be great to have her back

OMG FINALLY someone mentioning MILAK.. He sat out of the whole regular season. PLEASE COME BACK!!!

These match ups could really do LA in for making the finals as I can easily see them getting 3rd in everyone of their matches compared to Toronto who has a clearer shot at second in all of their meets.

If they can’t beat Toronto in their head to head match they don’t really deserve to go to the final instead of them. This is assuming that London finishes ahead of both of them which should happen but isn’t a given.

Even if they beat Toronto in match 2, LA could easily get 2nd/3rd/3rd whereas Toronto could be 3rd/2nd/2nd and still come out on top.

Is Ryan Murphy swimming this ISL season? That would be huge for LA.

It would have been more fun (and fair?) if LA and Toronto drew each other in the pair, then they’d duke it out three times.