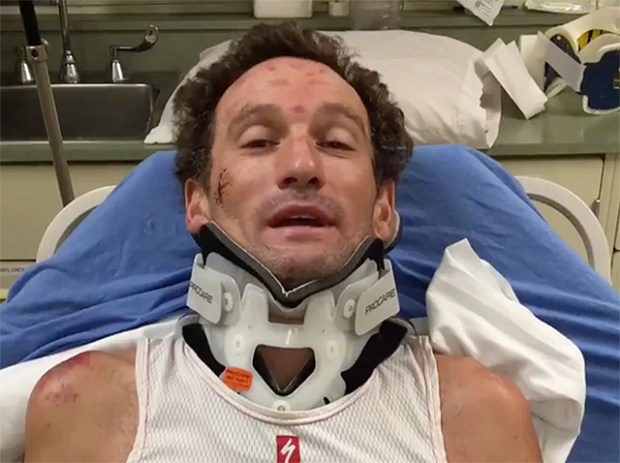 Tim Don, Ironman world record holder, will not be competing at this year’s premier event in Kona, HI, due to injuries sustained from a Wednesday, October 11 car collision while cycling. Described as one of the favorites in the race, Don fractured his C2 vertebrae and though surgery is not needed, he will be out of training for five to six weeks in a brace.

Gearing Up for Kona

Don was riding on the Kaahumanu highway near the Kona airport when the collision occurred. The Ironman World Championships, takes place Saturday, October 14, in Kailua-Kona, HI. Several of the 2,400 participating athletes arrive prior to the competition for training, and to acclimate to the Hawaiian environment. Don informed his fans of his collision through an Instagram post from a hospital bed in the Kona Community Hospital.

Born in London, Don lives in Boulder, CO, and won the ITU world champion title in 2006. The standard ITU world champion title is taken from a shorter distance of a 1500-meter swim, 40-km bike, and 10k run, compared with the 2.4-mile swim, 112-mile bike, and 26.2-mile run of the full Ironman race. After finding success at standard distance World Triathlon Union races, Don tried the half-ironman distance, and then transitioned to the full ironman distance.

Blazing To a World Record Win

Don set the World Triathlon Corporation (WTC) branded world record at the Ironman South American Championship in Florianopolis, Brazil on May 28, 2017, when he won with a time of 7:40.24 (44.16 swim/4:06:56 bike/2:44:46 run), breaking Canadian Lionel Sanders’ record of 7:44:29, set at the Ironman Arizona in November 2016. Jan Frodeno currently holds the world record for a non-WTC iron distance event at 7:35:39. Don had a successful spring 2017 winning the Ironman 70.3 Campeche in Mexico in March, and the Ironman 70.3 Liuzhou in Canada in April. The Ironman World Championship debuted in 1978 as a combination of the 2.4-mile Waikiki Roughwater Swim, 112-mile Around-O’ahu Bike Race, and 26.2-mile Honolulu Marathon, and included 15 competitors.

This type of accident is way too prevalent for cyclists and triathletes…..I wish the roads were more bike friendly!

Get well and back on the road soon!

Thank you for posting this article. Swimming is such a generally overlooked part of triathalons.