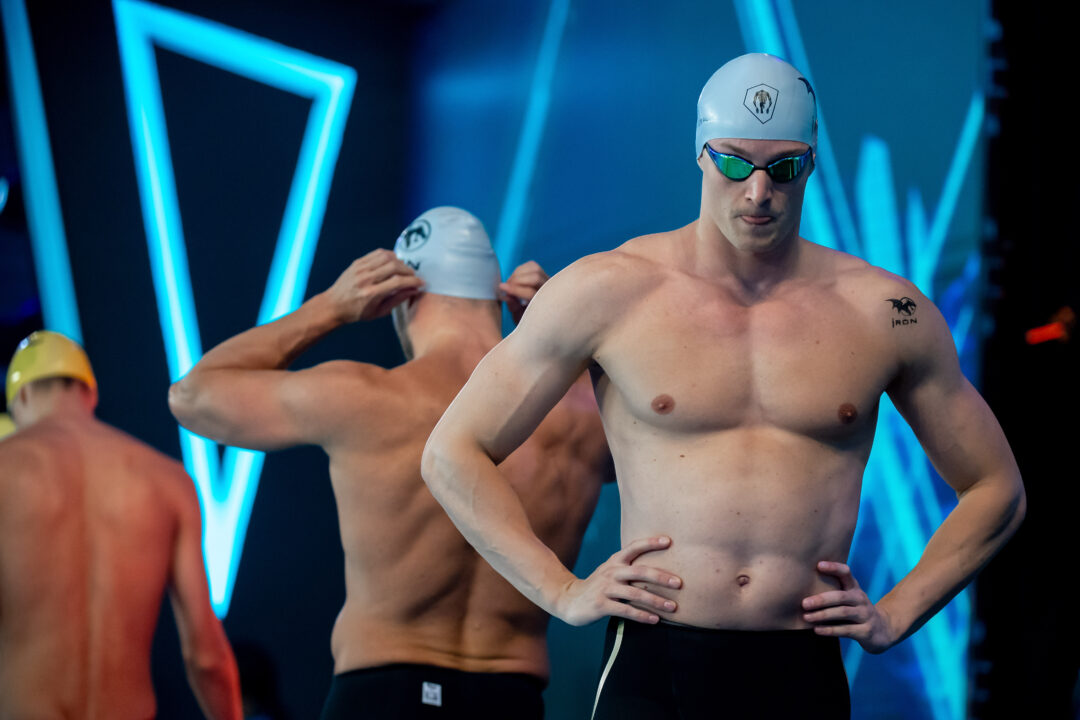 The Toronto Titans held off the hungry LA Current and DC Trident on day two of match five to nab their first-ever ISL match victory. While LA and DC entered day two with a 1.5-point gap, it was the Current who secured second place while the Trident picked up a third-place finish. Iron took a valiant fourth place following a series of event wins.

The Toronto women were the heavy scorers of this match, picking up 282.5 points to the Toronto men’s 235.5 points. Contrastingly, the LA Current women only out-scored the men by 3.5 points. At the same time, both DC men and Iron men out-scored their female counter-parts.

Toronto’s big point pick-up came from yesterday’s relays, where they earned 40 more points than any other team. In the skins, Toronto had picked up 66 points to Iron’s last-minute surge of 77 points. In fact, Iron scored more points from the skins events (77) than all five relays combined (68).

Iron put up a good fight on day two by picking up 6 event wins. Alys Thomas kicked things off with a strong win in the 200 fly. Two events later, Robert Glinta held off Toronto’s Shane Ryan for the win in the 100 back. Shortly after LA’s Anastasiya Gorbenko and Beryl Gastaldello finished 1-2 in the women’s 100 IM, Marco Orsi stormed home to take a 12-point win in the men’s 100 IM.

Another two events after that, Ranomi Kromowidjojo and Emilie Beckmann finished 1-2 in the women’s 50 fly, combining for a total of 19 points. Nicholas Santos kept the momentum going with a 0.04s victory over Toronto’s Marius Kusch in the men’s 50 fly. In the women’s 200 free, Barbora Seemanova and Veronika Andrusenko finished 2-3 behind LA’s Madi Wilson, an 11-point pick-up.

However, what did hurt Iron regardless of their last-minute points surge were mid-match point losses from either time penalty or stolen jackpot points. While jackpot points came to Toronto’s advantage, as they stole 22 extra points, Iron lost 28 points. The DC Trident had only lost 4 points from jackpot, seven times less than Iron’s jackpot losses.

Essentially, Iron’s 28 stolen jackpot points, on top of five penalty points, cancelled out their 11 checkpoint points, giving them a 22-point deficit from these mid-meet points. The DC Trident dodged penalty points and were able to secure 10 points. Meanwhile, both Toronto (44) and LA (23) received double-digit bonus points from jackpot and distance checkpoint points.

These stats are really interesting. Hope Iron will find out shomething for their point losses.
I agree with point reduction for DNS but not all of the current rules. I think point reduction because of the slower swimming in not a good idea. And these jackpots only helps for the big teams with full of stars. It is ok if they get bonus point for a record but now it is more than enough. They should cancel jackpots or if they keep jackpots the time difference should be revised. Or Just found out a better scoring system. I think this season has the worst rules, the checkpoint extra points also too much. I know ISL is young but I… Read more »