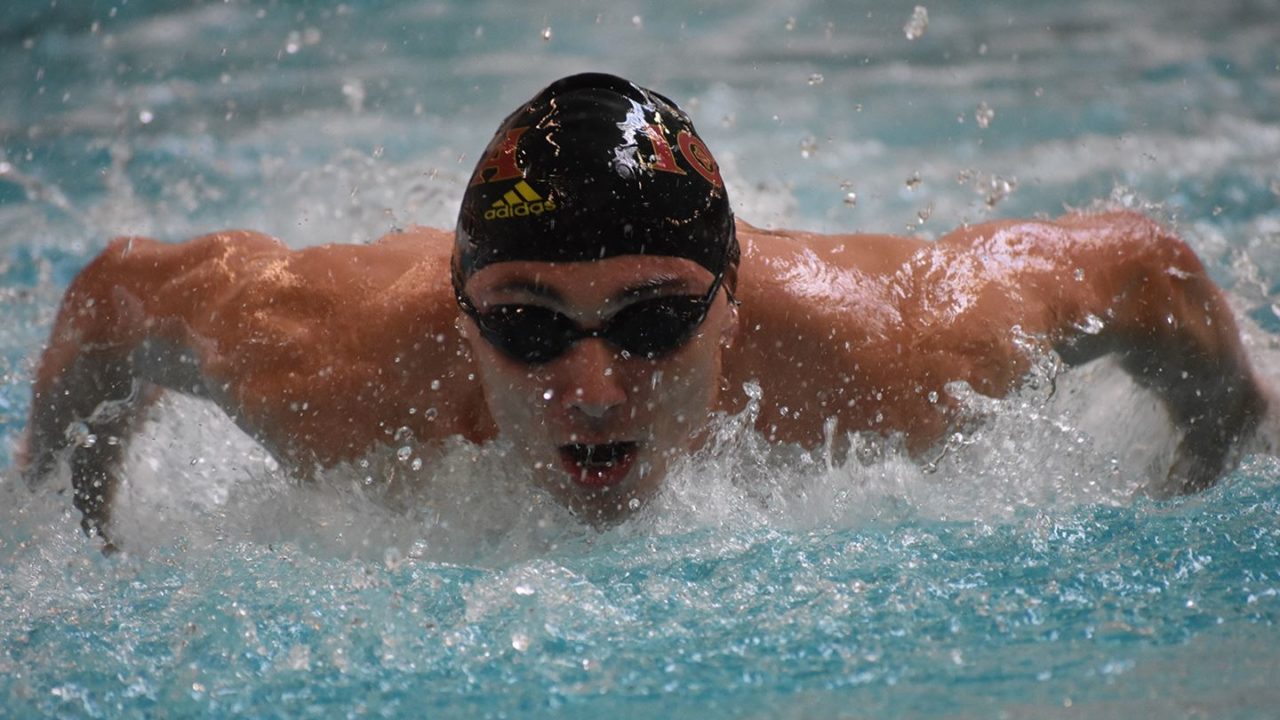 WORCESTER, Mass. – The Holy Cross swimming and diving team competed against Iona in dual meet action Saturday afternoon. The women came away with a 165-129 win, while the men lost, 166-88.

The Crusaders take on Bucknell next Friday, Oct. 18, at home at 4 p.m.

WORCESTER, MA – The Iona College men’s and women’s swimming and diving team kicked off their 2019-20 campaign on the road with a win and loss at the College of Holy Cross Hart Center Pool in Worcester, Massachusetts.

The Iona men trounced the Crusaders 166-88, placing first in each of the 14 events they raced in. The Iona women, despite winning nine of the 14 swimming events, fell by a score of 165-129.

The opening 200-yard medley relays put Iona ahead, as the quartet of freshmen Grace Curry and Julia Moser provided an early lead for senior Aly Chain and junior Kate Flynn to finish the relay at 1:51.60, a seventh of a second ahead of the Crusaders. The men’s team of junior Spencer Moran, sophomore Jackson Madonia, senior James Whaley and sophomore Daniel Hadary ended up nearly 3 seconds ahead of Holy Cross at 1:37.93.

The men’s 1000-freestyle saw senior co-captain Matthew Anderson lead a 1-2-3 Iona effort with a time of 9:57.32, along with Robert Wisniewski and Trevor Foti taking second and third, respectively.

Moser picked up her first career win, taking the 100-breaststroke at 1:10.04, with Kate DiRaimo and Ashley Cave placing fourth and fifth behind her. The men’s edition saw sophomore Jackson Madonia win at 1:00.53, with rookie Emil Bajramovic come in third.

Despite a fast closing lap, sophomore Sydney Ruschmeier came up .12 seconds short of Holy Cross’ Brianna Larnard at 2:13.47. James Whaley and Brian Connors took first and third respectively at 1:57.98 and 2:01.84.

The sprint group saw Flynn touch at 24.69 for the win, with senior Simone Sturrup third at 25.22. The men’s race saw Holbrook touch first at 22.62 with senior Alexander Cheruk third at 23.03.

The 200-breaststroke saw Moser lead a sweep for the Gaels, taking the top spot at 2:32.30, with Amanda Agostino and Kendall Paolicelli second and third.

The 500-freestyle saw another freshman from the Iona women’s side, Nicholson, win at 5:18.49. Anderson, Wisniewski and Foti going placed one, two and three, with Anderson cruising to a 10 second win at 4:49.91 in the same race.

The 400-freestyle relay quartet of Nicholson, Lee, Lopez-Silvers and Flynn touched a half second ahead of the Crusaders for the win at 3:39.43. The men’s team of Moran, Whaley, Hadary and Holbrook combined for a 6-second win at 3:15.38.

Next up for the Maroon & Gold is a home, quad-meet against Saint Francis Brooklyn, Sacred Heart and Wagner. The meet will be on Saturday, October 19 of Iona College’s homecoming weekend, with diving beginning at 9 AM and swimming starting at 11:30 AM.