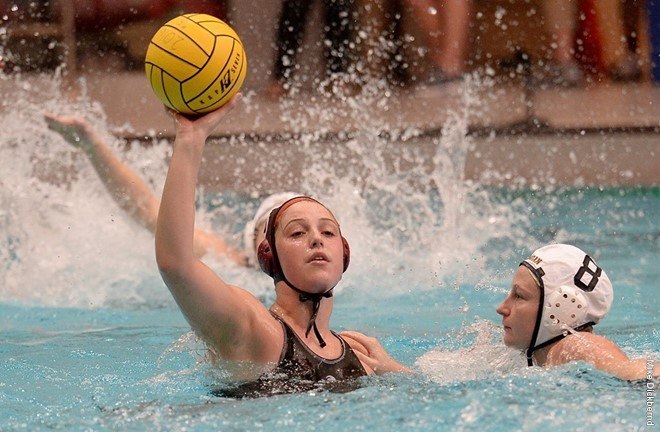 The Indiana water polo team concluded their weekend at the Bruno Classic, their final road trip before the team’s home... Current photo via Indiana Athletics

The Indiana water polo team concluded their weekend at the Bruno Classic, their final road trip before the team’s home opener, on Sundayafternoon at Brown University. The Hoosiers (6-2) finished an unbeaten weekend with an 11-7 win over Azusa Pacific before taking an exhibition win, 10-4, over Brown.

The Hoosiers began Sunday with a wire-to-wire victory over Azusa Pacific, 11-7. The Hoosiers converted 11 goals on 18 shots, going 3-for-5 in power play situations. Nacouzi’s hat trick was her second of the weekend, and she scored multiple goals in all three contests.

Holding a 3-1 lead entering the second quarter, the Cougars slotted an early goal to pull within one. Indiana responded with back-to-back power play goals by Nacouzi and Sarah Young, and earned a third power play goal from Bronwyn Smith in the closing minutes of the half.

Indiana took an 8-4 lead into the final quarter and did well to hold the difference, trading goals with the Cougars. Smith started it off with her second goal of the game, matching a career high, with Beadle and Smith finding the back of the net down the stretch.

Indiana received an early look at CWPA foe Brown in an exhibition contest, the final game of the Bruno Classic. The Hoosiers triumphed, 10-4, led by a dominating third quarter from Beadle and Sarah Myers. Beadle scored her hat trick in the third quarter alone, while Myers completed a hat trick after scoring once in the second.

Indiana returns home for two weeks of preparation as they build towards the first home weekend of the 2017 season. The 2017 Hoosier Invitational begins onFriday, February 24 with an exhibition against Carthage College. Saturday’s games against McKendree and California Baptist will stream live via BTN Plus on BTN2Go.com.